This is one of the major issues in the reconciliation of memories between France and Algeria. A subject long buried in the sands of the Sahara: the pollution of southern Algeria by naked tests ... 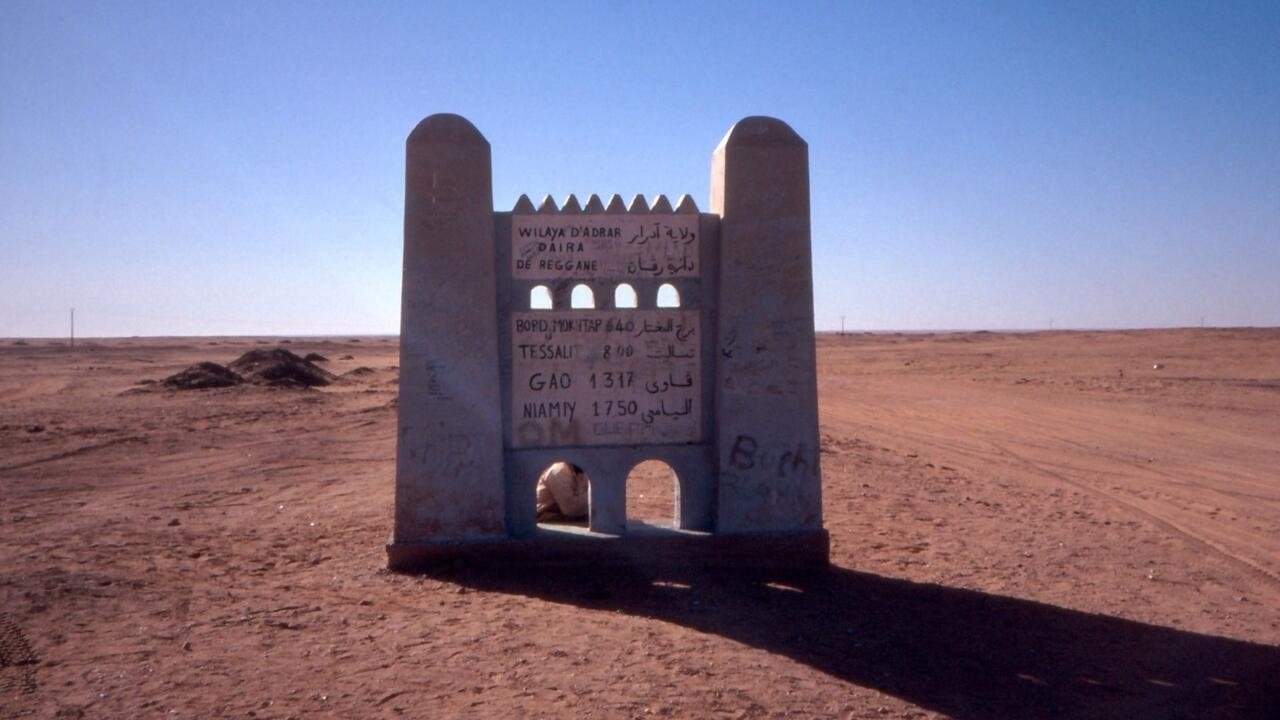 Beginning of the Tanezrouft trail south of Reggane in Algeria.

This is one of the major issues in the reconciliation of memories between France and Algeria.

A subject long buried in the sands of the Sahara: the pollution of southern Algeria by French nuclear tests.

More than fifty years after the last test in 1966, Algiers has just created an agency for the rehabilitation of the sites of the old nuclear tests.

on the sites of Reggane and In Ekker

At the time, Albdekrim Touhami, a native of Tamanrasset, was a teenager.

In Ekker is 150 kilometers to the north.

He remembers the installation of the French military base, perceived at the time as a welcome source of employment.

For us it was a godsend. Everyone was running to get a job as a simple maneuver or worker on the site. Far from us the idea that this bomb was going to be a disaster for the region. We were told,

"There you go, the bomb is going to explode at such and such a time. You may feel some tremors like some kind of earthquake. But fear not, there will be no problem."

Fifteen years after Hiroshima and Nagasaki, the dangerousness of nuclear weapons is known. Southern Algeria is chosen to carry out these tests, because the area is considered to be quite desert compared to the Southern Alps or Corsica, while being close to the French metropolis. France wants to quickly demonstrate its ability to use the bomb in a context of the cold war and the race for nuclear deterrence.

France wanted to catch up with the other nuclear powers that were the United States, Russia and the United Kingdom, to remain in what was called at the time" the big leagues ".

This partly explains why what was a priority was the result, not the concern linked to the environmental impact or collateral damage for the populations.

The priority was to blow up the bomb,

recalls Patrice Bouveret, co-founder of the Armament Observatory, an independent center of expertise.

In 1962, Algeria became independent. The tests continue. A majority, eleven, was achieved between 1962 and 1966 and therefore with the agreement of the new Algerian authorities. Systematically, the waste generated by these tests is buried, explains Jean-Marie Collin, spokesperson

for Ican-France (International Campaign for the Abolition of Nuclear Weapons)

which published a study with Patrice Bouveret,

Under the sand, the radioactivity

Very clearly, France has a desire to landfill,

She sees the desert as an ocean, an ocean of sand, and she buries anything that is likely to be contaminated.

Algerian independence and the fact that France left Algeria under somewhat complicated conditions, did not work in favor of depollution.

On the contrary, we left even more waste.

Waste ranging from a simple screwdriver to a tank on display to test the resistance of military equipment to atomic bombs.

Another pollution linked to nuclear tests, that, accidental, during the Berryl underground test in 1962.

If we carried out tests, it is because we did not fully master this nuclear technology and therefore there were accidents which released radioactive lava,"

continues the spokesperson for Ican-France.

The test concerned was in 62. We were there in 2007. The scientists measured the radioactivity which was extremely strong and they told us: "We must not stay more than twenty minutes on site, if we do not does not want to absorb radioactivity that is dangerous for the organism ".

Contaminated rocks left in the open, in passage areas.

Contaminated sand disseminated by the winds beyond the Algerian borders, in neighboring Niger in particular.

For about fifteen years, in the Tamanrasset sector and with very few resources, Abdelkrim Touhami and his association Taourirt have been trying to draw up a health assessment.

We have learned that a lot of people have died of suspicious deaths,” he

Little by little, people were dying out.

Babies were born with deformities.

Cancers broke out through this disaster.

To date, no official census of people exposed, whether French or Algerian. A single Algerian victim was compensated under the Morin law (2010). The decree of May 31 creating in Algeria an agency for the rehabilitation of test sites is an important step for Jean-Marie Collin of Ican-France

the Algerian state created a certain surveillance zone on these sites, but there had never been any action to protect these zones in order to avoid any real access. This decree engages the possibility that international organizations such as States can come and help the rehabilitation of these nuclear test sites. What we have at the same time are discussions between France and Algeria, officially revealed in April, while officially until then, these discussions did not officially exist.

These discussions took place within the framework of the Franco-Algerian working group on nuclear tests, created in 2008 under the chairmanship of Nicolas Sarkozy.

This rehabilitation issue was also included in Benjamin Stora's report on the reconciliation of memories between France and Algeria.

Algiers must ratify the Tian, ​​the Treaty for the Prohibition of Nuclear Weapons, to which France is not a signatory, before mid-October.

Supporters of the rehabilitation of old nuclear test sites want a joint Franco-Algerian mission to be sent to map the polluted sites to circumscribe them, to eventually treat them so that the inhabitants are no longer exposed to radioactivity.