Euro2020, Switzerland eliminates France 8-7 on penalties and wins the quarterfinals

Mbappé's mistake in the last penalty shot was fatal. The Swiss will face Spain on Friday in St. Petersburg 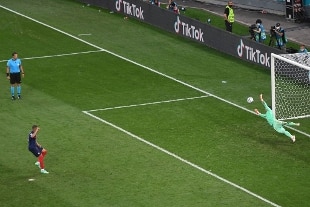 The penalty missed by Mbappé (GettyImages)

June 28, 2021Clamoroso at the Arena Națională in Bucharest. The world champions come out in the round of 16 of the European Championships defeated by Switzerland on penalties 8-7. Mbappé's error in the last penalty shot was fatal

The 90 minutes of regulation ended at 3-3 and overtime did not change the outcome of the match.

The Swiss took the lead with a header from Seferović in the 15th minute. In the 55th minute, the Swiss missed 2-0 with a penalty from Ricardo Rodríguez, saved by Lloris. At that point France managed to overturn the game and take the lead with a brace from Benzema (57 'and 59') and a third goal from Pogba (75 '), but Switzerland managed to find the 3-3 with Seferović's second goal in the 81st minute and Gavranović's ball in the net in the 90th minute.

After extra time, the sequence of penalties: for the Swiss scored Gavranović, Schar, Akanji, Vargas and Mehmedi; for France they made Pogba, Giroud, Thuram and Kimpembe, but Mbappé let Sommer's shot parry for the Swiss triumph.

The Swiss will play the quarter-finals on Friday against Spain in St. Petersburg.