June still hot, hot in the Center-South and muggy in the North

Temperatures on average between 32 and 35 degrees, but with even higher peaks in the inland areas of the Center-South and the Islands; possible local peaks close to 40 degrees in Sicily and in inland areas of Sardinia 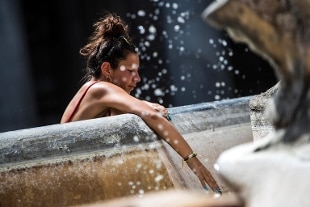 June 28, 2021 "The African anticyclone is reinforcing itself again over our peninsula, proposing a scenario very similar to that observed the week just past: the boiling air mass, in fact, will insist once again especially on Sicily and the South. climate - the Meteo.it meteorologists warn - is however very hot also in the rest of Italy and sometimes muggy in the northern regions.

or completely absent over much of the country, aggravating drought in many regions. An exception in this context is constituted by the Alpine areas which are lapped by a cooler and more unstable air circulation whose center is currently almost stationary in the north west of France ”.

Sunny weather over most of the country for the next few hours. In Sicily passage of high-altitude cloud banks. On the Alpine sectors, especially those of the North-West, cloud cover is increasing. During the day, the probability of showers and thunderstorms will increase in the Aosta Valley and in the Piedmontese Alps, especially in the northern part of the region; possible thunderstorms also in the western Lombard Alps.

In the evening there are still showers near the north-western Alps and probable thunderstorms on the Lombard Prealps Alps; brief thunderstorms on the western Lombard plain cannot be excluded. Temperatures: the heat will intensify in almost all regions and there will be an increase in both minimum values ​​and maximum temperatures.

32 and 35 degrees, but with even higher peaks in the inland areas of the Center-South and the Islands; possible local peaks close to 40 degrees in Sicily and in inland areas of Sardinia

. Winds: weak everywhere, except for temporary reinforcements of mid-day breeze in the valleys and along the coasts. Generally calm or slightly wavy seas.

On Tuesday in the Alps and along the Pre-Alps, especially in the North-West, conditions of instability since the morning, with clouds and possible scattered showers or thunderstorms; Local involvement in the nearby plains is not excluded, especially in the North-West. In the rest of Italy more stable and sunny weather, except for the temporary thickening in Liguria and on the reliefs and the sometimes dense veils in transit over part of the Center-South.

Warm climate throughout Italy, but with slightly decreasing temperatures in the Alps, North-West and central Tyrrhenian regions; maximums slightly increasing, on the other hand, on the Adriatic and Ionian sides. Afternoon values ​​in general from 28 to 35 degrees, but with even higher peaks in Emilia Romagna, inside the Center, southern regions and major islands; possible local peaks close to 40 degrees in Sicily. Mainly weak winds in a breeze regime; from the evening the libeccio on the Ligurian sea intensifies. Seas: generally calm or slightly wavy; in the second part of the day wave motion on the Ligurian coast.

On Wednesday the perturbation in slow transit over Central Europe

it will maintain unstable weather conditions in the central-eastern Alps, where showers and scattered thunderstorms will be possible in the morning. Some storms may also affect the upper Lombard plain and the Friuli plain. Throughout the rest of the country the weather will be mostly sunny with only a few haze passing through the south and over Sicily and local thickening close to the mountains.

Temperatures: slightly rising in the Ionian sectors of the South; in decline elsewhere, especially in the Northeast and in the inland areas of the Center. Winds: intense libeccio on the Ligurian Sea, moderate southwest in Emilia and foehn in the western Alps; moderate mistral on the Sardinian sea; mostly weak elsewhere. Seas: rough or very rough the Ligurian sea; moved the Sea of ​​Sardinia; little moved the remaining basins.