Historic visit after 3 decades.. Sisi in Baghdad for the economy, security and the Renaissance Dam

Egyptian analysts praised Al-Sisi's visit to Iraq on Sunday, which witnessed an Egyptian-Iraqi-Jordanian summit, and considered it a historic event, especially since the last visit of an Egyptian president to Iraq was more than 30 years ago. 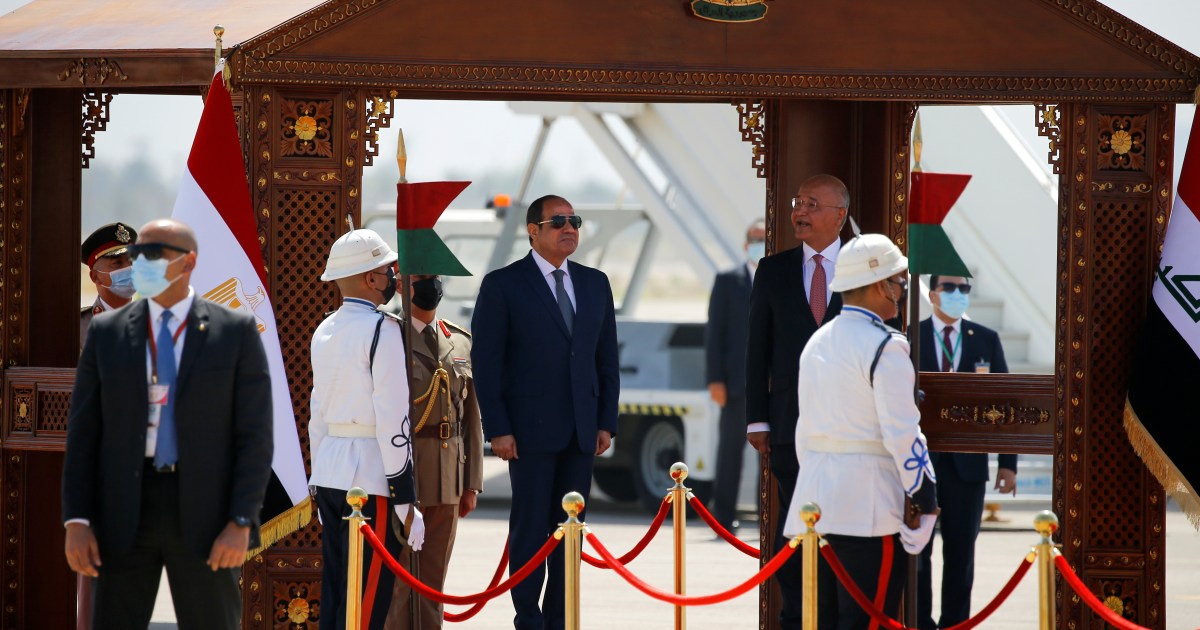 Cairo - A few days before the Iraqi invasion of Kuwait, in August 1990, former Egyptian President Hosni Mubarak headed to Baghdad in a last attempt to heal the Arab rift. His visit to Iraq was the last of its kind for an Egyptian president for more than 3 decades. Until President Abdel Fattah El-Sisi went to Baghdad on Sunday.

The visit aimed primarily at participating in the tripartite summit between Egypt, Iraq and Jordan, which represents the fourth round of the tripartite cooperation mechanism, which was launched in Cairo in March 2019.

According to the official spokesman for the Egyptian presidency, Bassam Radi, the tripartite summit discussed ways to enhance joint cooperation in various fields between the three countries, and intensify coordination on the latest political developments in the region.

Egyptian media were keen to point out that Sisi’s participation in the Baghdad summit comes within the framework of building on what was achieved during 3 previous presidential summits, evaluating development in various fields of cooperation and following up on projects being implemented, in addition to strengthening political consultation on ways to address the challenges facing the East. middle.

Egyptian analysts close to the authority unanimously emphasized the importance of the visit;

Former Foreign Minister Mohamed Al-Orabi told Egyptian TV that it is of particular importance to strengthening cooperation between the two countries and emphasizing tripartite cooperation with Jordan, expecting it to have positive results at the regional and international levels.

In turn, the former Egyptian Assistant Foreign Minister, Ambassador Mohamed Hegazy, believes that the visit is important to start strategic relations with one of the most important Arab countries in addition to Jordan.

In statements published by the state-run Al-Ahram newspaper, Sisi’s visit to Iraq opens a page for a history that changes the region’s geography and its security and military strategy, and to achieve beneficial economic integration for the peoples of the three countries and for the peoples of the “new Levant,” in addition to laying the foundation for Arab economic, political, security and military integration that leads the Arab East and North Africa. .

The Egyptian journalist, Mahmoud Bassiouni, described the visit as writing a new history in the relationship between the two countries, and said that Egypt provides great support to Iraq in restoring its position at the Arab level, after it was over the past years far from interacting with Arab issues due to the circumstances it went through. .

Bassiouni considered - in a telephone conversation with "eXtra news" channel - that this visit provides an opportunity for Iraq to restore its Arab role, through the Cairo gate and the tripartite cooperation gate with Egypt and Jordan.

The Baghdad Tripartite Summit is the fourth summit among the three countries;

The first was held in Cairo in March 2019, the second was in Washington in September 2019, while the third came in Amman in August 2020. The three summits and the subsequent meetings at the ministerial level witnessed the conclusion of several joint and bilateral economic agreements.

The Renaissance Dam crisis was not absent from the tripartite summit.

Al-Sisi welcomed the position of both Iraq and Jordan, which supports the Egyptian position on the Ethiopian dam, and considered that the issue of the dam is one of the priorities of Egyptian policy;

During a conference of foreign ministers of the three countries, Jordanian Foreign Minister Ayman Safadi emphasized Amman's absolute support for Egypt and Sudan, describing their rational stance based on international law.

He stressed the need for consensus between Cairo, Khartoum and Addis Ababa on the Ethiopian dam, and not to initiate the second filling of the dam without an agreement based on international law and that meets the full legitimate rights of the countries concerned.

It is noteworthy that Cairo entered a state of political stalemate with Baghdad following Iraq's invasion of Kuwait in the early 1990s, then Baghdad entered a dark tunnel with the entry of US forces into Iraqi territory, claiming that it had weapons of mass destruction.

However, the past years witnessed an improvement in relations between the two countries on the political and economic levels.

According to Agence France-Presse, Cairo and Amman are Washington's allies in the Middle East;

Therefore, Sunday's summit represents an attempt to bring Baghdad closer to Washington, given that Cairo and Amman are allies of the United States, which is seeking to distance Iraq from Iran, which has a strong influence on it.

The tripartite summit was postponed 3 times, the first in last January, without announcing the reasons for the postponement, and the second last March, when the bloody train collision occurred in Egypt, and the third when the issue of destabilization in Jordan was revealed, in April last April.