83 foreign ministers from all over the world gathered in Rome against Daesh terrorism. Prime Minister Mario Draghi will meet the US Secretary of State, Antony Blinken, at 4:30 pm at Palazzo Chigi 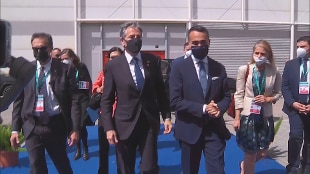 June 28, 2021 The 83 members of the global anti-Isis Coalition, more than half present at Foreign Minister level, meet today in Rome for the first time for the plenary ministerial, co-chaired by Foreign Minister Luigi Di Maio and by the US Secretary of State, Antony Blinken.

The Global Coalition against Daesh has achieved "significant results" which "show what goals can be achieved together" but "more work remains to be done" due to the presence of residual cells in Syria and Iraq and the growing expansion of the jihadist threat in Africa, US Secretary of State Antony Blinken said in the introductory greeting to the coalition's ministerial meeting.

For Foreign Minister Luigi Di Maio "Daesh has been defeated in its territorial dimension, but it has not yet been uprooted". Italy "does not deflect from its commitments" in the fight against terrorism, Di Maio said, thanking the US Secretary of State, Antony Blinken, "for the excellent teamwork in organizing this meeting". "The pandemic has confirmed that only by leveraging multilateralism can we face the challenges of our time and this coalition is an example of this", added the minister.

The global anti-Isis Coalition was a "crucial element" to obtain the "territorial defeat" of the Islamic State in Iraq and Syria. This was underlined by US Secretary of State Antony Blinken.

The countries of the Coalition, he added, must "committed" to the objectives set by the Coalition. In particular, Blinken cited the presence of 10 thousand ISIS fighters still present in Syria, which constitute an "unsustainable situation".

Among the priorities of the Global Coalition for the fight against Daesh is the fight "against the residual elements in Iraq and Syria" to prevent the caliphate from regaining ground in these two countries. This was underlined by the US Secretary of State, Antony Blinken.

US Secretary of State Antony Blinken, in the introductory greeting, expressed "strong support" for the Italian proposal to create a working group on Africa that does not address the jihadist threat only from a military point of view but also deals with the social factors that bring part of the population to support the terrorists.

Prime Minister Mario Draghi will meet the US Secretary of State, Antony Blinken, at 4:30 pm at Palazzo Chigi.

Blinken went to the Vatican this morning

where, after a cultural visit, he will have a private conversation with Pope Francis. Yesterday, the US Secretary of State met with Israeli Foreign Minister Lapid in Rome, hoping for a future for Palestinians and Israelis with equal opportunities and dignity.

The Ministerial set up at the Rome Fair More

than two years after the last meeting in full format, the Ministerial set up at the Rome Fair, it is announced, will make it possible to "reaffirm the cohesion of the Coalition" in ensuring a lasting defeat for ISIS, " reaffirm the commitment to stabilize "the liberated areas in Syria and Iraq," consolidate collaboration "in thematic Working Groups. Also on Italian impulse, ample space will be dedicated to contrasting the threat posed by organizations affiliated to ISIS in other areas, in particular in the Sahel and in various African regions: a phenomenon that has grown in size and danger in recent years and which also poses serious risks. for the security of the Mediterranean region.

ISIS "must not be able to regain momentum," said Blinken in an interview with the 'Journal du dimanche', in view of tomorrow's appointment. For this reason, even if the Coalition obtained "a victory" with the end of the geographical caliphate of Isis in Iraq and Syria, "we must not let our guard down".

Of the same opinion is the French Foreign Minister, Jean-Yves Le Drian, who, speaking with the same newspaper, stressed that to obtain the definitive defeat of ISIS "the stabilization of Iraq is essential". If this does not happen, he warns, the risks of an ISIS rebirth "are real".