There is still a big difference between how many domestic and foreign-born people have been vaccinated against covid-19 in Östergötland and on Gotland. This is shown by new statistics from the Swedish Public Health Agency. 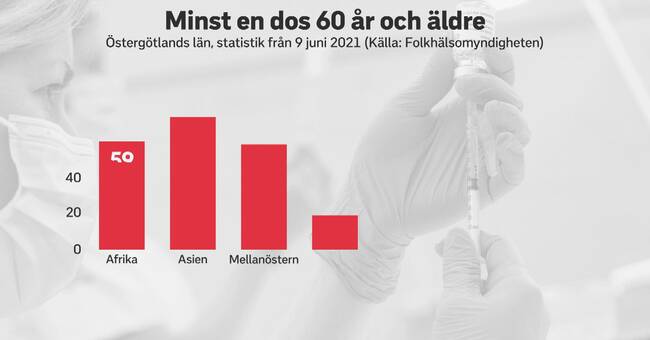 Earlier in May, SVT Öst reported that many foreign-born had not yet been vaccinated.

The region went out and announced that they would make more efforts to reach more foreign-born.

Just over a month later, there is still a big difference between domestic and foreign-born when it comes to vaccination.

But the differences are diminishing.

In Östergötland, 93 percent of domestic-born people aged 60 and older have currently received at least one dose of vaccine.

But among East Goths born in Africa, 60 years and older, 59 percent have received their first dose of vaccine.

On Gotland, 95 percent of the natives, 60 years and older, have received at least one dose of vaccine.

The corresponding figure, for Gotlanders born in the Middle East, is 68 percent.

The statistics are taken from the Swedish Public Health Agency's compilation of 9 June 2021.

Still the best in the country

Despite the differences, Östergötland and Gotland are well located compared to other Swedish regions.

Östergötland and Gotland end up at the top when it comes to vaccinating foreign-born, as other regions have even greater differences.

- This is about informing here and now, when it is so important that we get a broad vaccination coverage in society, but it is also about creating trust in the long term, says Rickard Lundin in the special health care management in a press release.

The Östergötland region is now continuing its efforts to try to get more foreign-born people to be vaccinated.

Among other things, information must be sent out, in each home language, to the asylum seekers in the county.

In the video above, you can see the figures for vaccinations in Östergötland and on Gotland.