First Observation｜On the eve of the founding of the party, what is special about the collective study of the Politburo

On the afternoon of June 25, the Political Bureau of the CPC Central Committee conducted a collective study.   Since the 18th National Congress of the Communist Party of China, collective study on the eve of "July 1" has almost become a common practice, and the topics of study are all related to "party building."   This year marks the centenary of the party. This collective study is more innov 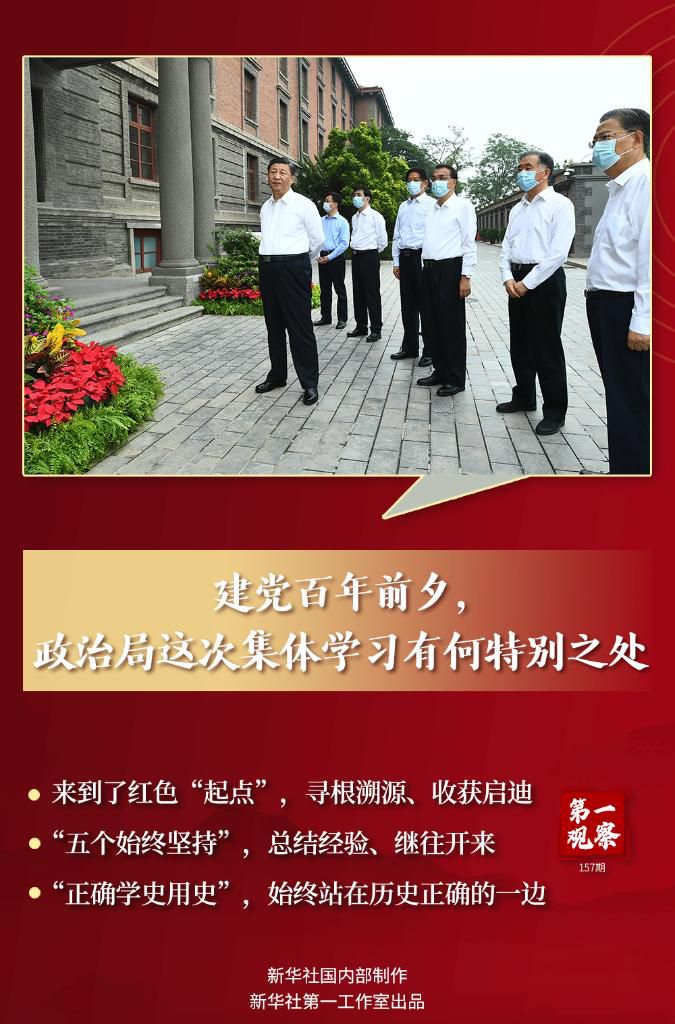 On the afternoon of June 25, the Political Bureau of the CPC Central Committee conducted a collective study.

Since the 18th National Congress of the Communist Party of China, collective study on the eve of "July 1" has almost become a common practice, and the topics of study are all related to "party building."

This year marks the centenary of the party.

This collective study is more innovative and profound.

From the perspective of the theme, it is bright and far-reaching-make good use of red resources and continue the red blood;

From the content point of view, it is quite meaningful-two activities are arranged, one is to visit the Peking University Red House and the theme exhibition of the early Beijing revolution activities of the Communist Party of China, and the other is to visit the former residence of Comrade Mao Zedong in Fengzeyuan;

From a formal point of view, it is rich and lively-taking the form of a combination of visits and discussions.

After the visit, Comrade Xi Jinping returned to Huairen Hall in Zhongnanhai to further study around the theme.

Two previous group studies have also gone out of Zhongnanhai. In 2013, the "classroom" was moved to Zhongguancun, and in 2019, he went to the front line of media integration and development of news organizations, which adopted a combination of research, explanation, and discussion.

The itinerary of the visit and study highlights the importance of going deep into the birthplace of the red, exploring the dream and mission of the century-old party, and absorbing the power of forge ahead.

The Red House of Peking University was the birthplace of the May Fourth Movement and an important early activity site of the Communist Party of China.

The founders of the Chinese Communist Party, Li Dazhao and Chen Duxiu, are here to explore the truth of saving the country and the people, and the young Mao Zedong is eagerly absorbing knowledge and ideological nutrition here.

Comrade Mao Zedong planned here a series of major political strategies for the establishment and construction of New China.

The grand blueprint of New China is slowly opened here.

At the historical moment of the party’s centuries, the key node of the intersection of the "two centenary years" history, General Secretary Xi Jinping came to the red "starting point" to find the roots and gain enlightenment.

These five aspects are the experience summaries and valuable enlightenment of the centuries-old party that has gone through tribulations and challenges, and has continued to march toward victory and glory.

General Secretary Xi Jinping’s sincere admonishment to the entire party is for the continued inheritance of the fine traditions of the Communist Party of China, so as to sum up experience from a new historical starting point and better advance the great cause.

In this collective study, "red" is a high-frequency word.

"Red resources are the testimony of our party's arduous and glorious struggle, and the most precious spiritual wealth." "Red blood is a concentrated expression of the political nature of the Communist Party of China, and is the source of spiritual strength for the Chinese Communists in the new era." It is to let the whole party make good use of red resources, pass on the red genes, and pass on the red country from generation to generation.

As early as in the collective study conducted on June 25, 2013, General Secretary Xi Jinping clearly pointed out: "Learning party history and national history is a compulsory course for upholding and developing socialism with Chinese characteristics and for the party and the country to advance various undertakings. This course is not only compulsory, but also must be completed. It is necessary to continue to strengthen the study of party history and national history, do a good job in the practical work in the in-depth thinking of history, and better move towards the future, and continue to hand over the persistence and development of socialism with Chinese characteristics Qualified answer sheet."

It can be seen that learning history, increasing trust, advocating morality, and practicing are consistent in the mind of General Secretary Xi Jinping.

"Drawing forward strength from the party's struggle history" is an important point that General Secretary Xi Jinping has repeatedly emphasized.

This is what the general secretary said and did the same.

Since the 18th National Congress of the Communist Party of China, General Secretary Xi Jinping has visited places and always pays homage to the revolutionary sacred sites, red sites, and revolutionary historical memorial sites of great historical significance to our party.

There are more than 30 rough statistics.

In the words of the general secretary himself, "the main ones are basically here."

"Accurately study history and use history" "must get enlightenment from history, and extract the magic weapon for defeating the enemy from historical experience."

To learn the past is to know the coming.

A few days ago, General Secretary Xi Jinping led the leading comrades of the central government to visit the Chinese Communist Party History Exhibition Hall, and then arranged for this collective study.

In a few days, it will be time to achieve the first centenary goal, and we are standing at a new starting point for achieving the second centenary goal.

The future starts from today.