How much red meat is allowed per day to reduce the risk of this type of cancer? 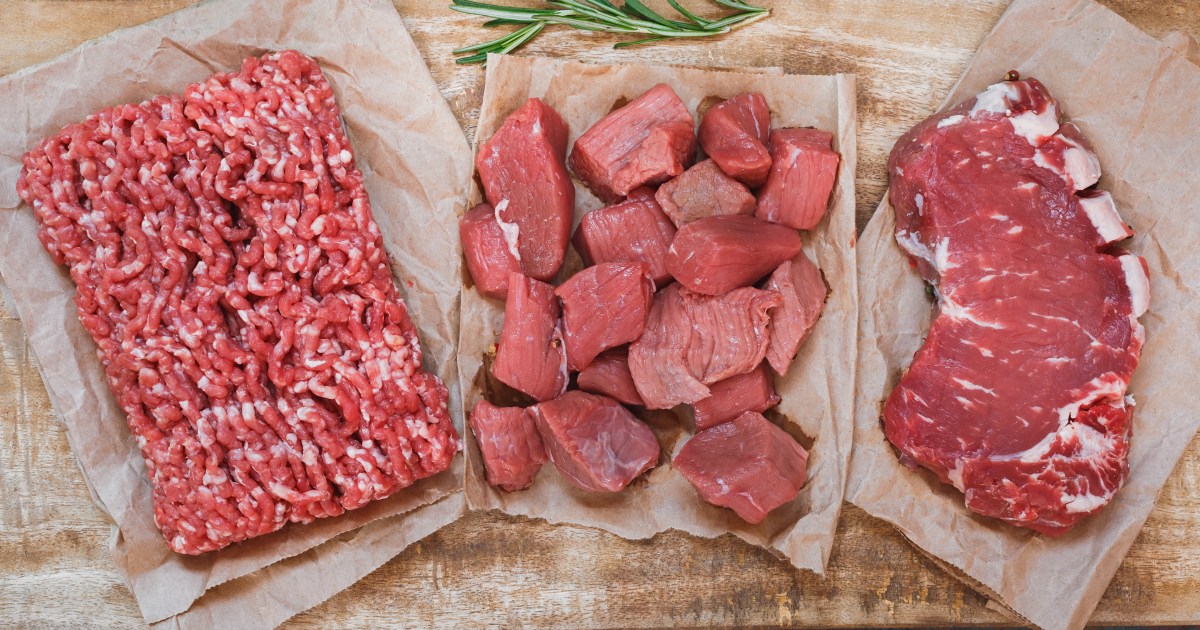 A recent study found that eating red meat is linked to an increased risk of colon cancer, so how does that happen?

And how much is associated with this risk?

What other meats do not increase the risk of colon cancer?

At the beginning, we will address the recent study, and the new data it provided, and then we will provide tips for consuming red meat, and other types of meat that do not cause colon cancer, and then we will conclude with information about colorectal cancer and its symptoms.

A new study has found that red meat consumption may enhance mutations associated with DNA damage in colorectal cancer patients, according to a statement on the American Association for Cancer Research website.

The study was published in the "Cancer Discovery" journal, and was reported by websites and agencies such as Agence France-Presse, Deutsche Welle and the French magazine L'Obs.

The study found that genetic mutations - which indicate DNA damage - were associated with increased consumption of red meat and increased cancer-related deaths in patients with colorectal cancer.

What's new in the study:

Analysis of the DNA sequencing data revealed the presence of several mutations in normal and cancerous colon tissue, including alkylation.

Alkylation was closely associated with eating processed or unprocessed red meat, but not with eating poultry or fish or with other lifestyle factors.

The researchers identified the KRAS and PIK3CA genes as potential targets of the alkylating mutation, and found that colorectal tumors harboring KRAS G12D or Kras G13D mutations (KRAS G13D) or PIK3CA E545K, which are commonly seen in colorectal cancer, have more alkylating compared to tumors without these mutations.

Alkylation was also associated with patient survival. Patients whose tumors had the highest levels of alkylating damage had a 47 percent greater risk of colorectal cancer-related death compared to patients with low levels of damage.

"Our study first identified an alkylating mutational signature in colon cells and linked it to red meat consumption and carcinogenic mutations," Giannakis said. These results suggest that red meat consumption may cause alkylating damage that leads to carcinogenic mutations in the KRAS and PIK3CA genes, thus promoting colorectal cancer development.” Also, eating red meat is a risk factor for colorectal cancer, and also provides opportunities to prevent, detect and treat this disease.

Giannakis explained that if doctors could identify individuals with a genetic predisposition to accumulating alkylating damage, these individuals could be advised to limit red meat intake for prevention.

In addition, the alkylating mutational signature can be used as a biomarker to identify patients at higher risk of developing colorectal cancer or to detect cancer at an early stage.

However, Giannakis noted that future studies are needed to explore these possibilities.

"Eating red meat releases chemical compounds that can cause alkylation," Giannakis explained, and these compounds are caused by iron, which is abundant in red meat, or from nitrates often found in processed meat, according to a statement to Agence France-Presse.

The International Agency for Research on Cancer declared in 2015 that processed meat is carcinogenic, and that red meat may cause cancer to humans.

How much red meat is allowed?

This issue needs to be detailed, as the study in question did not specify a specific number, but the French Press Agency and the newspaper Lobes said that high levels of alkylating were observed only in tumors of patients who ate an average of more than 150 grams of red meat per day.

On the other hand, the National Health Service in Britain (NHS) has a more strict opinion, and a clear and clear recommendation, as on its page on “red meat and the risk of bowel cancer” it says that eating a lot of red meat and processed meat increases the risk of developing bowel cancer (colon cancer and rectal cancer). ).

That's why it's recommended that people who eat more than 90 grams (cooked weight) of red and processed meat per day reduce the amount to 70 grams or less, which she says may help reduce the risk of bowel cancer.

An example is red meat

Examples of processed meat (meat that has been preserved by smoking, curing, salting, or by adding preservatives):

That is, the processed meat recommended to reduce includes processed poultry meat as well.

What types of meat are not associated with an increased risk of colon cancer?

This is all provided that it is eaten fresh. As for processed meats such as chicken mortadella and smoked fish, they are processed meat, and they are not included in this list, and it is recommended to reduce them and treat them like processed meat.

How can you reduce your intake of red meat daily?

And you must remember that reducing red meat is one of the factors that protect against colon cancer, while other factors include eating a healthy diet, enjoying activity, and seeing a doctor for a periodic review and examinations.

What is colon cancer?

Cancer occurs when changes occur in the genetic material of the cells "DNA" (DNA) in the colon, which turns them from normal to cancerous cells that multiply in an uncontrolled way and do not die.

Colon cancer usually arises from tissues in a condition called "precancerous", that is, it is not cancer but usually turns into a malignant tumor later.

These tissues are considered benign tumors, called polyps, but after a while they develop from a benign tumor (ie, an abnormal growth of cells, but it is stable and does not expand or spread) to a malignant tumor, that is, cancer.

Heredity has an important aspect in colon cancer, as there are mutations in the genes that are passed from parents to children.

Therefore, the doctor may recommend that if you are from a family in which one of the members of the colon cancer was previously diagnosed, you should do more regular examinations than other people.