There are a lot of negative images associated with telemarketing, but some are happy to do their jobs and even hope for their retirement. Four telemarketers talk about the highlights of their work. 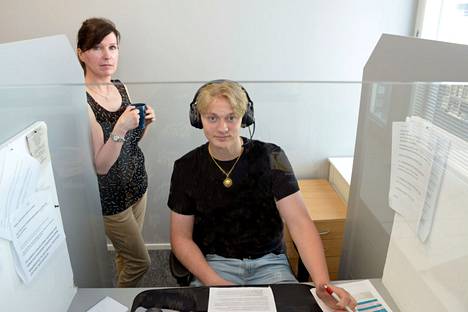 Everyone has an opinion about telemarketers and their work.

The work is seen as poorly paid, annoying teasing, and horror stories are told about how the industry didn’t last more than a day.

Those who enjoy telemarketing are overshadowed.

Freedom, the fact that work does not flow into leisure time and even pay, are praised.

In work largely based on commission pay, the thickness of the pay bag depends on its own success.

Mega sells, among other things, Alma Media magazines, such as Arvopaperia and Talouselämä.

Hornborg has worked as a telemarketer for 4 months, initially on 4.5-hour evening shifts in addition to studying and now on a 7-hour morning shift since the beginning of summer.

Hornborg was described by the company as a “rising sales star”.

Koskela, on the other hand, has worked in telephone sales for three years.

He has previous work experience in payroll.

Koskela believes that telephone sales are even a pension career.

In the morning team, the base salary is clearly lower than the sales team, but the commission for successful sales is higher.

The size of the commission depends on the severity of the customer register.

In the recent past, subscribing to a magazine is considered an easier customer than a customer who has not subscribed for years.

Hornborg and Koskela do not answer directly what kind of salary in euros they reach on average or at best.

Salary varies considerably from month to month, both admit.

Based on Tivaamis, it turns out that at best, a telemarketer can earn more than the Finnish average salary, but “it requires work, after which he is exhausted”.

According to various calculation methods, the average salary is about 3,000–3,500 euros per month.

- It is said that top sellers can be reached, Koskela says.

Koskela says that income fluctuates on a monthly basis, ie in some months income may also be a ton lower.

- Very active and energetic when you do everything, so you can get that top salary regularly.

According to Duunitor, the average salary in the industry would be almost 2,800 euros, according to Oikotie EUR 2,400 per month.

Telemarketers Asta Koskela and Kasper Hornborg have liked their jobs.

Koskela ended up working as if by accident.

No payroll chores were found, so the woman decided to take an inch and apply for a telemarketing despite her prejudices.

The first day went by wonder.

- I think you have to give at least a month to telemarketing.

Many quit before work begins.

I didn't get the experience of success either immediately, Koskela says.

For Hornborg, telesales were suitable, because the evening work is just over half a day.

It suited a high school student seeking additional earnings and work experience, although some loved ones questioned whether telemarketing was the most sensible choice.

- As there was little work experience, it was difficult to get other jobs.

Telemarketing felt good because I was able to agree on working hours, I am talkative and my sports background is useful here, Hornborg says.

The sports background helps to both cope with hectic work, deal with disappointments and also achieve the best results.

Many quit before work begins.

I, too, did not experience success right away.

Both interviewees feel that they have to be lively and social from morning to night, and there is no need to be afraid to pick up the handset.

- No one can sell with all their calls.

That's why you have to play a lot, Koskela says.

Telemarketers consider more than seven stores to be a good sales result.

In principle, 40 sales a day is possible, although very rare, Koskela says.

In dealing with disappointments, Hornborg feels that a hockey background is helpful.

-Without disappointment, success would not feel anything.

Koskela also admits that on a bad day, it is difficult to rule out the feeling of failure.

Then the sales success of the next guy can even be annoying.

On a bad day, a magazine can be sold for one or two.

On the other hand, on good days, the telemarketer feels omnipotent and “has one smile all day”.

On the other hand, sports also help with perseverance.

If the customer does not immediately warm up to the offer, it must not be handed over.

- It does not mean pressure, but often the client needs time to think.

The first reaction is not always the final one, Hornborg says.

An efficient salesperson keeps calls on average for a couple of minutes, but sometimes a successful sale requires up to 15 minutes of chatter.

- In its own way, it is even harder, Koskela says.

According to both, the sales must be good-energetic, but one's own.

For example, one should not speak Savo if one is not really Savolainen.

Without disappointment, success would not feel anything.

However, both hope that more and more young people would apply for telemarketing jobs.

According to them, the work will be very useful in the future, if it is aimed at the commercial sector, for example.

In addition, it can help with performance excitement, and when selling magazines, you can easily get topics for high school essays, for example.

- It would be great if more and more people dared to try the industry for even a month or two.

Yasmin Suoranta, 29, and Atte Kangasmäki, 17, work at Pasastar. Suoranta has been a telephone salesman since the age of 19, or ten years.

What has kept him in the industry is that he enjoys sales and interacting with people.

Kangasmäki is at work for the second summer.

The company they represent, Pasastar, is owned by A magazines and sells the magazine’s own magazines, such as Eeva and Apua.

It has offices all over Finland and about 200 employees.

Both say they make about a hundred calls a day.

Suoranta says that he normally reaches about ten stores, for Kangasmäki ten stores is a personal record and he is satisfied with more than four daily sales.

Pasastar has offices all over Finland.

Suoranta says that his salary is an increasing hourly wage according to the sales result.

At the rate of ten magazines sold, he earns 200 euros a day.

At best, he reaches these daily incomes for up to a couple of weeks in the tube.

Sometimes there are worse days, but without sales Directing has never been missed.

- Perseverance and self-confidence are, of course, important traits if you want to succeed in telemarketing.

You must not give up, because yes, the customer closes the phone if he is not interested, Suoranta says.

You will get the best results if you talk about selling like a friend.

Kangasmäki, who studies programming, says that he enjoys summer jobs and considers his salary competitive with other jobs.

- After all, it's closed, Kangasmäki says.

The first days were tangled for him.

On the very first day, he was able to sell five orders, but on the second, zero.

After all, it's closed.

Since then, flatness has been found.

- If you are applying for telemarketing, you should try it for at least two weeks.

You don't get the best out of yourself right away.

According to Kangasmäki, perseverance is an important feature for the telemarketer. For those applying for telephone sales, Kangasmäki gives a hint that it is worth giving up prejudices and trying to learn as much as possible from work.