Legislative in Armenia: the opponent Robert Kotcharian gathers his supporters one last time

The electoral campaign ended this Friday at midnight in Armenia, before the early parliamentary elections on Sunday. Among the most serious competitors to outgoing Prime Minister Nikol Pa… 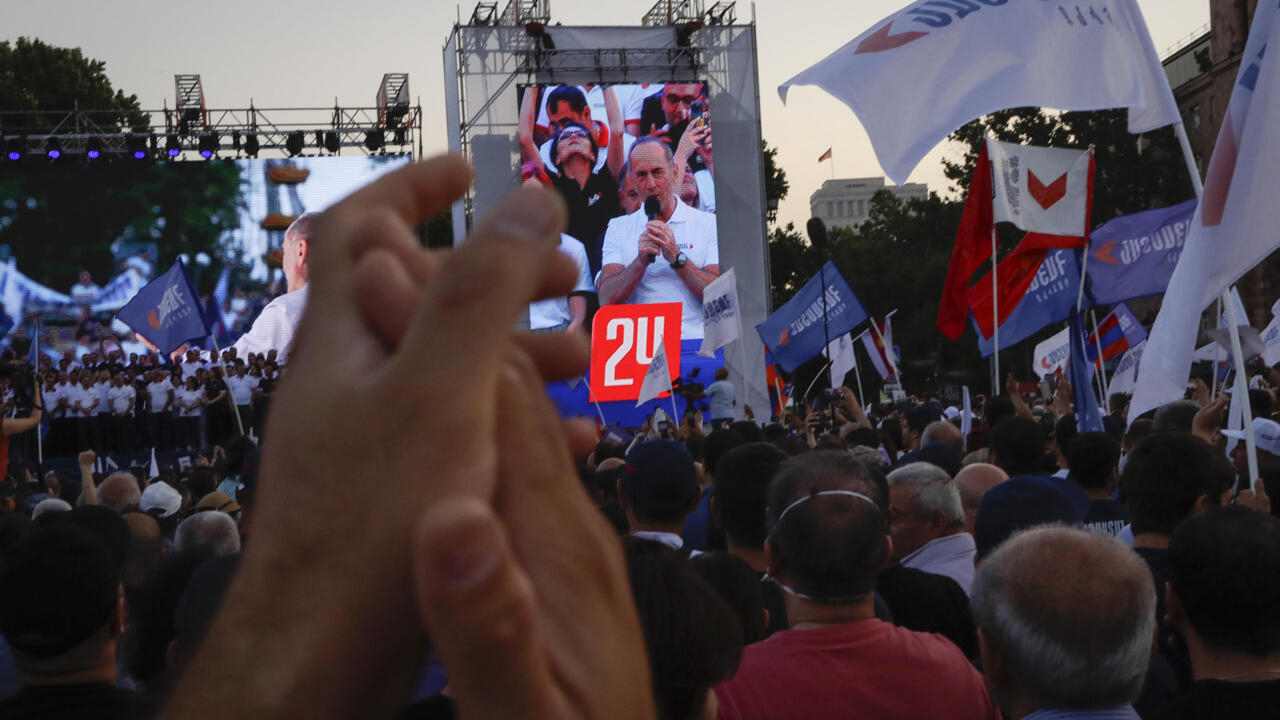 Legislative in Armenia: the opponent Robert Kotcharian gathers his supporters one last time

They were between 20,000 and 40,000 to attend this Friday evening at the last meeting of former President Robert Kotcharian before the legislative elections on Sunday.

The electoral campaign ended this Friday at midnight in Armenia, before the early parliamentary elections on Sunday.

He held his last meeting on Republic Square in Yerevan.

the day before - from 20,000 to 40,000 people, according to estimates - the main opposition candidate Robert Kotcharian gathered his troops one last time this Friday evening before the poll Sunday.

Surrounded by the candidates and his campaign team, Robert Kotcharian addresses his supporters by promising them a strong Armenia.

A slogan echoed by the crowd, reports our special correspondent in Yerevan,

Supporters are of all ages, including families with children.

Vladimir came with three friends to this Republic Square where he had nevertheless demonstrated, three years ago, for Nikol Pachinian, against the representatives of the old regime.

I think I was fooled and I'm ashamed of it,” he

Today we trust Robert Kotcharian because he has a lot of experience.

The current power has totally discredited itself and in particular, with the defeat in the war.

He cannot run a state.

Armenia lost a war against Azerbaijan, hereditary enemy, in the fall of 2020. After six weeks of fighting that left nearly 6,000 dead, Yerevan had to

that it had controlled since a first war in the 1990s around Nagorno-Karabakh, a secessionist Azerbaijani region mainly populated by Armenians.

Perceived as a national humiliation in Armenia, this defeat triggered a political crisis, forcing Nikol Pachinian, 46, including three in office, to call early legislative elections in the hope of lowering tension and renewing his mandate.

From the rostrum, the 66-year-old former president, who led this small former Soviet Caucasian republic from 1998 to 2008, repeats his priorities: the security of the country and its borders.

The demonstrators wave Armenian flags, but also some Russian flags.

Robert Kotcharian defends a rapprochement with Moscow which he considers as the sole guarantor of security in the Caucasus.

This is also the opinion of Armen Petrossian, an official of the Ministry of Transport.

It's no secret that Robert Kotcharian and Vladimir Poutine are friends

Vladimir Putin wished him a happy new year and also his birthday, he always remembers.

This beautiful friendship is what will save Armenia and all Armenians who are savvy,

The few polls available gave the formations of Robert Kotcharian and Nikol Pachinian neck and neck.

To read also: Legislative in Armenia: rise of the Alliance of former President Kotcharian