Cemeteries of Numbers.. 319 Palestinian martyrs are in captivity

Across a remote desert area inside the occupied Palestinian territories, metal plates bearing different numbers are spread, surrounded by barbed wire and restricted doors. These numbers are replaced by the occupation with tombstones, for the bodies of (319) Palestinian martyrs, which it has held for decades. 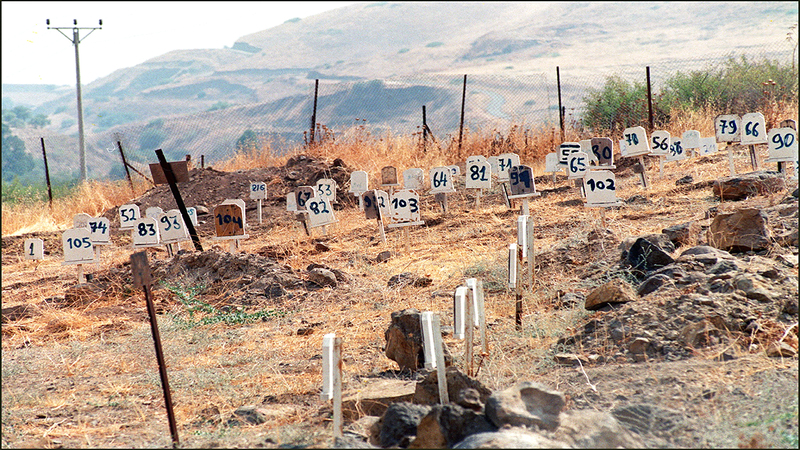 The occupation has held their bodies since 1967

Cemeteries of Numbers.. 319 Palestinian martyrs are in captivity

Across a remote desert area inside the occupied Palestinian territories, metal plates bearing different numbers are spread, surrounded by barbed wire and restricted doors. These numbers are replaced by the occupation with gravestones, for the bodies of (319) Palestinian martyrs, which it has held for decades.

The occupation has followed a policy of detaining the bodies of Palestinian martyrs since 1967, the last of which was the capture of the body of the martyr Jamil al-Amouri from the city of Jenin in the northern West Bank, which was raised on Thursday, the tenth of this June, where the bodies are placed in refrigerators or “cemeteries of numbers”, without evidence or documentation. Or taking into account a decent and dignified burial.

The Israeli occupation is holding the bodies of (253) Palestinian martyrs in the “cemeteries of numbers”, in addition to (66) others it captures in the mortuaries, all of whom were martyred by the occupation forces’ bullets in different circumstances and at different times.

Under the policy of holding the pure bodies of Palestinian martyrs, their families are deprived of their farewells and their burial.

"Emirates Today" met the family of the martyr Jamil Al-Amouri (24 years old), from Jenin refugee camp, where signs of grief hang over all its members. They were denied a look at the body of their martyred son, the occupation refuses to hand over his remains, after he was shot before The occupation forces this month, to become a number in the census of families.

Abu Alaa al-Amouri, the uncle of Martyr Jamil, says: “My nephew left the house since Thursday morning to participate in his friend’s wedding, and with the late hours of the night we did not know his whereabouts, until we were surprised at two o’clock in the morning of the following Friday, June 11, by a call on his father’s mobile phone from a device. The Palestinian association tells us that Jamil was martyred on Nazareth Street in Jenin.”

The dawn hours passed heavy on the family of Martyr Jamil until the sun spun its threads, in order to confirm the news of the death of her son, and to know his fate. The tragedy was that the occupation held his body and refused to hand it over to his family and the Palestinian side.

It is noteworthy that Jamil al-Amouri, a freed prisoner, was martyred after an Israeli special force stormed the city of Jenin, where they pursued him and fired at him, to rise as a martyr alongside two officers from the General Intelligence Service in the city, while they were trying to repel the force, while his friend, Wissam Abu Zeid, who was wounded, was wounded. He was accompanied by their wounded friend, who was also detained by the occupation despite his critical injury.

Abu Alaa Al-Amouri continues, saying: “Until this moment, we do not know the fate of Martyr Jamil, and all we know is that the occupation killed him, and is holding his remains, without allowing us to know the location of his body or receive him to take a farewell look at him. Since the first day of the news of his martyrdom, we have contacted national, human rights and human rights institutions. In turn, she contacted the Palestinian Minister of Civil Affairs to follow up on the matter.

He added, "We will not calm down until we know the fate of our martyred son, receive his body, and bury him in the Muslim cemeteries in his hometown, because holding his body doubles the volume of grief and aches in our hearts."

The human catastrophe that squeezes the hearts of the family of the martyr Jamil al-Amouri from Jenin camp, its bitterness is swallowed more and more severely by the family of the martyr Anis Dolah from the city of Qalqilya in the northern West Bank, whose body has been held by the occupation since the eighties of the last century, after his martyrdom behind the bars of Israeli prisons, where his family did not even know The moment where his immaculate body is being held.

The same tragic situation is experienced by the families of (300) Palestinian martyrs from the Gaza Strip, Al-Quds Al-Sharif, and the cities of the West Bank, whose pure bodies have been captured by the occupation over the past years and months. Since 2015 until now, the occupation has detained the bodies of (79) martyrs, including eight martyrs. The occupation captured their pure remains in May of this year.

Among them is the martyr Muhammad al-Tarareh, from the town of Dura, south of Hebron in the West Bank, who was martyred at the age of 17 on the last day of June 2016. The occupation detained his body in the “Numbers Cemetery,” refusing to hand it over to his family.

Although five years have passed since the martyrdom of Muhammad, his mother still keeps his clothes and belongings, and refuses to distribute them even to her children, and keeps gifts he brought her, with many kisses and hugs.

The bereaved mother keeps so many memories of the delight of her liver, to find enough spaces through which to comfort herself, perhaps one day she will have the embrace of his remains, give him to his final resting place in a national wedding befitting him, and read Al-Fatihah on his grave, which is covered with evidence, not with unknown numbers.

• Pain grips the hearts of the families of (300) Palestinian martyrs from the Gaza Strip, Al-Quds Al-Sharif, and West Bank cities, whose bodies have been captured by the occupation over the past years and months. Since 2015 until now, the occupation has detained the bodies of (79) martyrs, including eight martyrs, families Occupation of their remains in the month of May of this year.

News/Politics 2021-06-23T00:47:58.800Z
Cemeteries of Numbers.. 319 Palestinian martyrs are in captivity
News/Politics 2021-03-31T20:59:45.692Z
Heroes must not blaspheme political and legal organs to fight a "combined punch" to protect the rights and interests of heroes
News/Politics 2021-06-11T05:42:47.456Z
Morning smells like the gunpowder of the resistance.. A wide celebration of the martyrs of Jenin after they confronted the Israeli occupation forces
ADS
Life/Entertain 2021-04-01T13:20:40.197Z
Ching Ming guards the cemetery of the heroic martyrs and sweeps the sacrifices for the family members-chinanews.com
News/Politics 2021-05-16T07:45:22.242Z
"Al-Qassam" used it for the first time .. This is what the wife of the martyr Yahya Ayyash said about naming a missile for the resistance in his name.
News/Politics 2021-07-03T01:37:54.623Z
The occupation suppresses protesters in the West Bank, and protests continue against the policy of demolition in the Silwan neighborhood of Jerusalem
News/Politics 2021-06-10T14:48:52.788Z
A freed prisoner and two members of the intelligence service... Three Palestinians were killed in a clash with Israeli special forces in Jenin
News/Politics 2021-06-10T07:38:02.736Z
Two Palestinian security service martyrs during a clash with Israeli special forces that stormed Jenin
Life/Entertain 2021-04-05T03:59:42.396Z
"Cloud Sacrifice" service launched on Qingming in Honghe Prefecture, Yunnan: Online Sacrifice Scan, "Sacrificial Sacrifice Scan"-Chinanews.com