(Fighting against New Coronary Pneumonia) The Biden government completes 300 million doses of vaccinations and 70% of adult vaccination targets meet the challenge   China News Agency, Washington, June 18 (Reporter Chen Mengtong) US President Biden announced at the White House on the 18th that within 150 days of his inauguration, the United States has completed 300 million doses of COVID-19 vacc 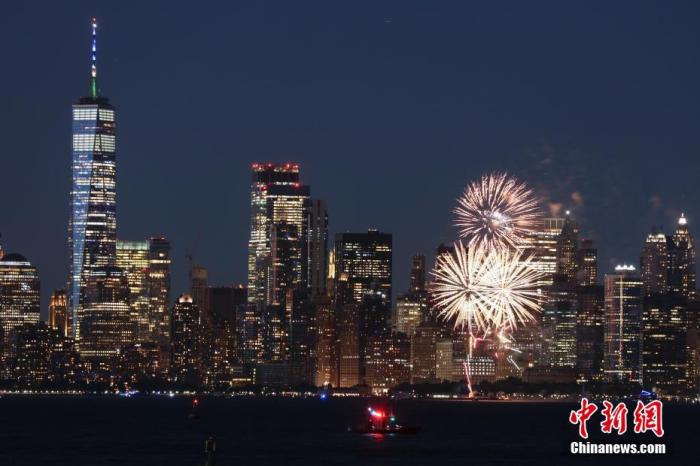 China News Agency, Washington, June 18 (Reporter Chen Mengtong) US President Biden announced at the White House on the 18th that within 150 days of his inauguration, the United States has completed 300 million doses of COVID-19 vaccination.

Biden said in a speech on the epidemic that day: "Compared with last year, the United States is about to usher in a very different summer. A bright and joyful summer."

Data map: On June 15th, local time, fireworks were set off in the New York Harbor of the United States to adorn the night sky.

That night, fireworks were set off in many places in New York State and more than ten landmark buildings were lit up with blue and gold lights to celebrate the new crown vaccination goal.

At present, the average number of confirmed and dead cases in the United States in 7 days is about 12,000 and 300.

Although the epidemic has improved significantly, the American people's willingness to vaccinate has decreased, making the Biden administration's other anti-epidemic goal facing challenges.

Biden previously proposed that 70% of American adults should receive at least one dose of the vaccine before July 4.

There are 15 days left before the Independence Day holiday, but this figure is still 65.1%.

"Washington Post" pointed out that the above goals may not be achieved until the summer.

At present, the average 7-day vaccination dose in the United States is about 1.1 million doses, which is much lower than the 3.3 million doses per day during the peak period.

Biden pointed out that in areas with high vaccination rates in the United States, mortality and hospitalization rates have fallen sharply.

"Unfortunately, in states with lower vaccination rates, the rate of new cases and hospitalizations has not declined in many places. In some places, it has actually risen."

Data released by the White House on the 18th showed that currently, more than 175 million Americans have received at least one dose of the vaccine.

The rate of one-dose vaccination in 15 states and Washington, D.C. has reached 70%.

According to US media statistics, the current one-dose vaccination rate in Alabama, Louisiana, Mississippi, Tennessee, and Wyoming is less than 50%.

Biden also pointed out that the mutated new crown virus is a "serious problem" in the United States' fight against the epidemic.

The new coronavirus variant will make people who have not been vaccinated even more vulnerable than they were a month ago.

In the face of high-risk, highly-transmissible mutant viruses, complete vaccination is still the "best way" for self-protection.

"On July 4th, while celebrating Independence Day, we will celebrate independence from the epidemic. We hope everyone can do it." Biden said.

Earlier this week, the White House revealed that a thousand-person celebration will be held on the South Lawn on Independence Day, inviting medical staff, rescuers and their families on the front line of the fight against the epidemic. This will be the largest event held at the White House since Biden took office as president. (Finish)