"Italy and Spain are not only united by deep historical, political and cultural ties. They are strategic partners in the ambitious projects we face in Europe. The ecological transition, digitization, transformation of our cities. Together with France, Germany, and the other member states want to build a more modern, competitive and supportive European Union ", said the premier 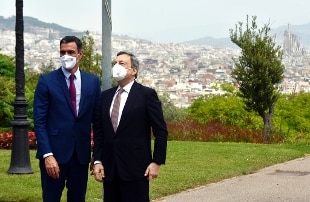 June 18, 2021 "Together Italy and Spain are stronger", said Prime Minister Mario Draghi opening the work of the Italy Spain Forum in Barcelona. "There is no competition, there is benefit for both countries," he added. "In a phase of profound transformation like the current one, Italy and Spain share the same vision of the future".

Enough north-south divisions, the EU is more competitive and supportive

"Italy and Spain are not only united by deep historical, political and cultural ties. They are strategic partners in the ambitious projects we face in Europe. The ecological transition, digitization, transformation of our cities. Together with France, Germany, and the other member states want to build a more modern, competitive and supportive European Union, one that overcomes the traditional divisions between North and South, and shows itself united in comparison with the other global powers of our time ", said Prime Minister Mario Draghi speaking at the Italian-Spanish dialogue forum.

"The green transition, in addition to being a moral obligation towards younger and future generations, also presents great opportunities for development. Investing in greater environmental sustainability also means helping economic growth and employment," said the Prime Minister Mario Draghi, in Barcelona. "Italy has allocated almost 40% of the Next Generation Eu funds to the ecological transition, which is equivalent to almost 75 billion in the next 5 years. We are committed to the active reduction of emissions and continue the decarbonisation commitment undertaken in recent years. We promote renewable energies, we bet on hydrogen and we encourage the energy efficiency of buildings. We are committed to protecting the territory and fighting environmental degradation,with measures for over 15 billion. We invest in the protection of water and marine resources, in the safeguarding of biodiversity and in the restoration of healthy ecosystems ".

"For the digital transition, the Italian Plan allocates over a quarter of the funds of the Next Generation Eu program. We intend to increase productivity and innovation, and bridge the existing territorial gaps. We invest over 7 billion to offer families, businesses, schools and hospitals across the country have high-speed connectivity, "said Prime Minister Mario Draghi, in Barcelona. "We then digitize public administration services and secure data, with the first national cloud migration strategy. We streamline administrative procedures and strengthen digital identity. We strengthen the electronic health record, as a fundamental tool for provision of digital health services. Italy's commitment to this issue,and in particular on connectivity, it is maximum. We therefore look forward to rapid collaboration between the European Commission and governments ", he adds.

Recovery, for Italy and Spain is a unique opportunity

"In Spain, the unemployment rate for those aged 15 to 24 is more than double that in the EU. In Italy, almost 30% of young people do not work and are not enrolled in any course of study or training. In both our countries, the difference in the unemployment rate between women and men is greater than the European average ". Prime Minister Mario Draghi said this today in Barcelona. "And we share many vulnerabilities to climate change, such as the risk of heat waves and droughts, or that of erosion and floods, especially in coastal areas, he noted." The Next Generation Eu, with 750 billion in funds to be spent by 2026 , represents a unique opportunity to respond to these challenges ", observed the premier.

"This morning we had the opportunity to talk about our bilateral relations which are strong and will strengthen for the challenges of the future". This was stated by Spanish Prime Minister Pedro Sanchez speaking at the Italian-Spanish dialogue forum after a bilateral meeting with Prime Minister Mario Draghi.

In our Pnrr possible joint opportunities

"Our PNRRs lay the foundations for the growth of our countries but also for the exploitation of joint opportunities that we can find together. Last November at the Italian-Spanish summit I said that it was an action meeting to work together, now we are defining strategies and projects ". Thus the Spanish Prime Minister Pedro Sanchez opening the proceedings of the Italy Spain Forum in Barcelona.

Without Spain and Italy there would be no recovery

"The agreement on Next Generation funds today would not be a reality without the contribution and acceleration of this debate that the governments of Spain and Italy have undertaken in the difficult and dark moments of the pandemic", said Spanish Prime Minister Pedro Sánchez . "Together we are stronger", he added, who also echoed the "esteem" and "the particularly intense interest among the citizens of Spain and Italy".