Angela Merkel criticizes full stadiums at the Euro: "You have to be very careful"

A dinner to talk about Europe, the economic recovery, the coronavirus in times of the European Championship, migration in the Mediterranean, Turkey and how to follow the ... 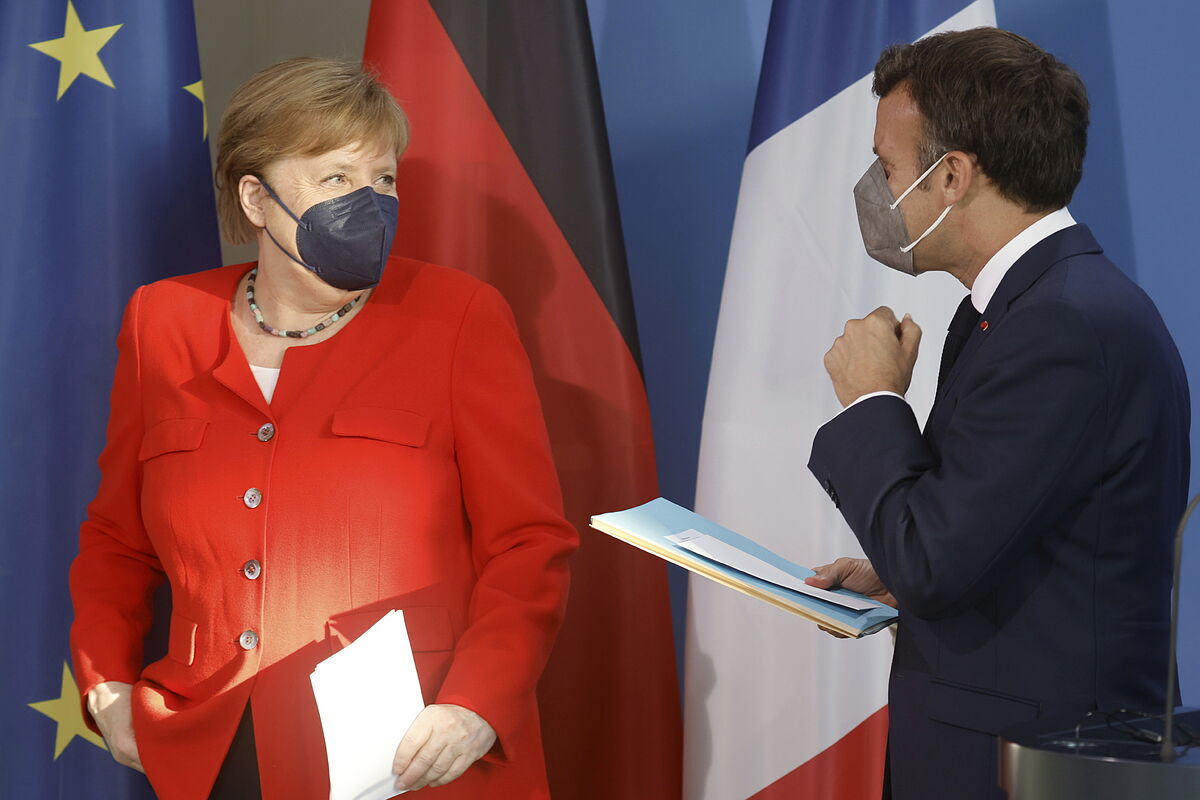 to talk about Europe

, the economic recovery, the coronavirus in times of the European Championship, migration in the Mediterranean, Turkey and how to follow the example of the American, Joe Biden, to improve relations with Russia. That is what this coming to Berlin has brought French President Emmanuel Macron, who, received with military honors and a red carpet, has become the first president to step on the Foreign Ministry this year, due to pandemic restrictions.

The occasion was special and not only because it will be one of the last "tête a tête" meetings between Macron and Chancellor Angela Merkel, which will end his political career in September. The evening is one more link in the whirlwind of summits and meetings with which June started and its objective, as is tradition between France and Germany, will serve as a

preparatory to the European Council

next week in Brussels.

In terms of health, Merkel and Macron, will try to raise their voices in unison

against the relaxation of the measures adopted in the pandemic

in light of the advance of the Delta variant of coronavirus. "We will have a summer with a lot of freedom but not with all freedom. You have to look at Lisbon to see how quickly the pandemic can reappear. You have to be very careful with the Eurocup and see how we can avoid stadiums like the one we have seen "said the chancellor without mentioning Budapest.

Except for the menu, nothing was closed prior to dinner, as Merkel and Macron made clear in a brief press appearance.

"There are many issues on the table and in the field of foreign relations the most complicated is Russia," said Merkel, who like Macron, said she was willing to seek a form of constructive cooperation with Moscow and take a step forward as given. by Biden with Vladimir Putin in Geneva.

Merkel and Macron, like most of their European colleagues, including the Commission, are beginning to consider the need to break the loop of provocations, confrontations and sanctions of recent years.

To advance in the contentious Ukraine and because "we need our continental neighbor to ensure stability in Europe and resolve conflicts in other regions such as Syria or Libya," said Merkel.

The adoption of a common strategy with Turkey will be easier, because according to Macron, President Recep Tayyip Erdogan has been constructive since the Commission presented its position last March.

At stake is the extension of a humanitarian agreement that, despite threats from Ankara, which has tried to link it to a customs agreement, so far without success due to the refusal of Greece and Cyprus, maintains its function of tourniquet for migration.

At least on the eastern flank of the EU, because illegal migration continues to pressure the southern borders and at the request of the Italian Prime Minister, Mario Draghi, migration will be the subject of debate and with it

With the issue of reconstruction funds regulated, Merkel and Macron insisted on the need to shore up the economic recovery and keep the Stability Pact frozen until the growth and employment levels prior to the pandemic were reached.

"The priority now is reconstruction, growth, investment and employment," stressed the French president, who will address these issues with Merkel from the bilateral level given that France and Germany have agreed on joint investment and development projects in areas ranging from mobility and digitization to the aerospace and technology industry.

Merkel and Macron have been at the epicenter of the marathon of meetings and summits that kicked off this very intense month of June. The NATO summit and the G-7 coincided, although without the time to speak alone about the movements that are taking place on the international board, and which will be followed by a new offensive by US diplomacy in Europe next week. Secretary of State

embarks on a tour in Berlin on Wednesday that will take him to Paris and Rome and will conclude at a new summit, this time that of the G-20 foreign ministers in Matera.

Merkel and Macron have developed a real bond and it is possibly the one with which the chancellor has worked best. With Macron there are four presidents with whom he has coincided: Jacques Chirac (2005-2007), Nicolas Sarkozy (2007-2012) and François Hollande (2012-2017). The beginnings however were difficult. When Macron pronounced his already acquaintance at the Sorbonne in 2017 in favor of the

, in Berlin they became deaf.

Merkel, always reluctant to talk about budget integration or a European defense architecture, also fell silent when, in 2019, Macron said that NATO was brain dead.

The health and economic crisis linked to the Covid-19 pandemic marked a turning point.

And the truth is that without the Franco-German axis, the EU would never have carried out a European recovery plan of 750,000 million euros, which breaks the German taboo on financial solidarity.

On Tuesday, an unprecedented first issue of common debt was carried out at the EU level, for an amount of 20,000 million euros.

It was something similar to the "Eurobonds" that Macron was asking for.