Yesterday, the World Health Organization office in Africa warned that the third wave of the “Covid-19” epidemic is accelerating on the continent with the new mutant, and called for an increase in the supply of vaccines. Yesterday, France abandoned the mandatory wearing of masks abroad, which indicates an improvement in the epidemiological situation in Ur. 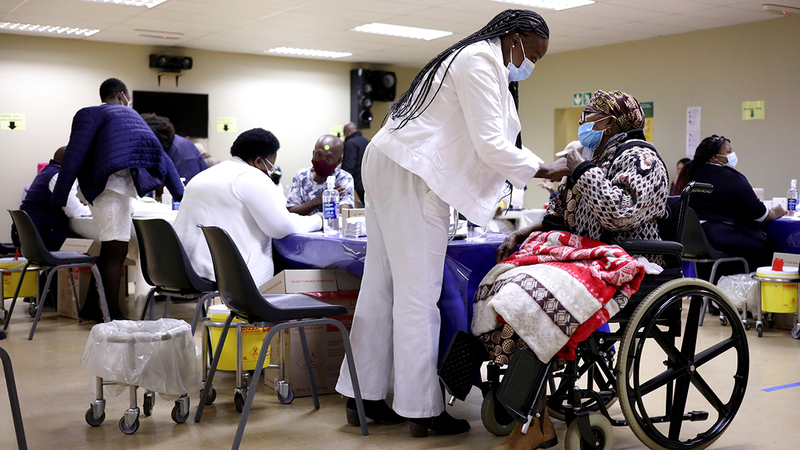 France drops mandatory masks abroad, and Japan is preparing to lift the state of emergency

The number of infections is increasing by 22% per week across the entire African continent.

Yesterday, the World Health Organization office in Africa warned that the third wave of the “Covid-19” epidemic is accelerating on the continent with the new mutant, and called for an increase in the supply of vaccines.

Yesterday, at a time when France abandoned the mandatory wearing of masks outside, which indicates an improvement in the epidemiological situation in Europe, Tokyo is preparing to lift the state of emergency about a month before the Olympic Games.

The Director of the Health Organization in Africa, Machidiso Moeti, said in a virtual press conference that the number of "infections is increasing by 22% per week" across the continent.

She called for intensifying the delivery of vaccines, saying that "Africa needs these doses now to stop the third wave."

The World Health Organization confirmed that "about 12 million people are now fully vaccinated, but this represents less than 1% of the population" of the continent.

And at Disneyland Paris, Mickey and Pluto were receiving visitors, yesterday, after a seven-month closure.

"On the national territory, the epidemic is receding and it is being brought under control," French Health Minister Olivier Veran said.

And if the epidemic is still causing deaths in France (45 deaths Wednesday), the number of infections has recorded a significant decline (3,058 new cases).

The government decided to lift the mandatory wearing of masks abroad and a fine of 135 euros, which accompanied the decision at the height of a heat wave and with the start of the European Cup matches.

Many parents who brought their children to Parisian schools yesterday were still wearing masks, either out of concern or because of not seeing the news.

But wearing a mask remains mandatory indoors, such as cultural places, shops, offices and public transportation.

Yesterday, the Austrian government also announced the reopening of dance halls from July 1, after most of them had closed since the first wave of the epidemic in March 2020, as well as lifting restrictions related to the capacity of cultural events.

On the other hand, the wearing of a muzzle type “FFP2”, which was imposed in January to ensure better protection from mutated versions of the virus, will no longer be mandatory.

But the regular muzzle must still be placed in transportation and places of worship.

This means that the hospitality industry will be able to receive customers again during evening periods, with somewhat less capacity initially, said Chancellor Sebastian Kurz, in Vienna, yesterday.

"People can dance, have wedding parties, and celebrate," he added.

Kurz explained that the situation of injuries has become much better than what was expected in general, in reference to infection rates during a week, with 15 new cases recorded for every 100,000 people per week.

"We can take more big steps toward normalcy," Kurz said.

Kurz explained that Austria has made great progress in its vaccination campaign, with more than half of the population having received at least one dose of the coronavirus vaccine.

On the other hand, the Vice-Chancellor of the Medical University of Vienna, Oswald Wagner, said that it is possible that the Delta strain of the Corona virus will dissipate hopes related to easing further restrictions currently imposed to combat the spread of the virus, but added that the vaccine will also provide a very high level of infection. protection against this strain.

In Japan, and a month before the opening of the Olympic Games in Tokyo, Prime Minister Yoshihide Suga confirmed, yesterday, that the state of emergency will be lifted next Sunday in the capital and other regions in the country, although restrictions will be kept until July 11, especially for restaurants and bars that will continue to close their doors. early evening.

Japan will provide its citizens with a vaccination passport from next month, the government said.

On the other hand, in the face of a “dangerous” situation, Moscow decided to make vaccination mandatory for residents of the capital working in the service sector (transport, restaurants, culture, health, education and banking), for the first time in Russia, while the vaccination campaign is slow in the absence of any restrictions.

For its part, Western Europe is preparing for the summer holidays, and the ambassadors of the 27 European Union countries have given the green light to add the United States to the list of countries and territories from which travelers can enter, even if they do not receive the vaccine, to the European Union.

The Europeans base their decision on the improvement of the epidemiological situation and the progress of vaccination campaigns.

The list of countries exempted from the travel-related ban has been expanded to include Albania, North Macedonia, Serbia, Lebanon, the United States, Taiwan, Macau and Hong Kong.

Thanks to the vaccination campaign, the number of daily deaths has decreased dramatically and life has returned to normal in most parts of the country. Almost all restrictions have been lifted in California and New York, where 70% of adults have received at least one dose of the vaccine.

Yesterday, the European Commission approved the economic recovery plan for Greece, which will be financed by a common European loan aimed at alleviating the repercussions of the epidemic.

Athens will receive 30.5 billion euros from the European Union over several years.

Portugal and Spain became, the day before yesterday, the first two countries to obtain the green light from Brussels for their stimulus plans.

Spain, one of the countries worst affected in the first wave of the epidemic, will receive about 140 billion euros.

• The ambassadors of the European Union gave the green light to add the United States to the list of countries and territories from which travelers can enter.