Senate, first ok to the "Fondone" decree: greener and digital, but also health care and culture

The decree - with the resources in 30 projects that meet the guidelines and objectives set by the PNRR, interventions from environment to culture, from health to infrastructure and earthquake areas - now passes to the Chamber which must approve it by 6 July 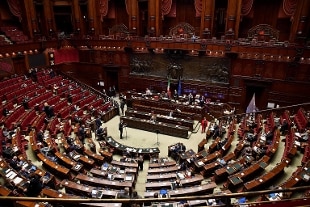 June 17, 2021 The Senate Chamber approved the bill converting the so-called

173 yes, 2 no, 18 abstentions. The text now goes to the Chamber. The approval of the decree-law 6 May 2021 n. 59, containing Urgent Measures relating to the Complementary Fund to

the National Recovery and Resilience Plan

and other urgent measures for investments, must arrive by 6 July.

The text establishes, as the rapporteur

explains in the Chamber

, the use of 30.6 billion for the years from 2021 to 2026 deriving from the multi-year budget gap requested by the Council of Ministers and approved by Parliament on the 22nd. last April. Expects

of which 20 already planned and co-financed with the PNRR, while 10 projects are completely new and financed by the Complementary Fund.

All 30 projects meet the guidelines and objectives set by the PNRR.

The interventions financed with the complementary fund are broken down as follows:

1,780 million for interventions in favor of earthquake areas,

further strengthened by an amendment and an agenda approved by the Budget Committee;

9,760 million are earmarked for the Ministry of Infrastructure and Mobility

, dynamic monitoring for the remote control of bridges, viaducts and tunnels, the development and maritime accessibility of ports, the electrification of docks and internal areas.

1,455 million euros are foreseen for the Ministry of Culture

for a strategic investment plan on cultural heritage sites, buildings and natural areas. And

2,387 million for the Ministry of Health

6,800 million to the Ministry of Economic Development

for particularly innovative programs, one of which is the Polis program, which will involve Poste Italiane and will cover 4,800 municipalities in Italy.

Funding will also arrive for the enhancement of the

Resources Dine at the Ministry of Justice to improve the prison situation, with particular reference to the prison facilities for both adults and children,

euro in total in the period 2023 to 2024 for infrastructure projects designed to combat prison overcrowding.

for supply chain contracts to the ministry of

of which 15 million for the year 2021 for investments for the transition to free-standing, extensive and pasture farming methods, such as

for the transition to cage-free systems.

to research initiatives for innovative technologies and pathways in the health and care sectors.

4,500 million for the measure of the Superbonus, further extended. As for the autonomous public

as at 30 June 2023, while for expenses incurred by condominiums as at 31 December 2022, regardless of the progress of the works. During the work in the Budget Committee, adds the

senator of the League

, various amendments were approved and additional investments were added for a total of 700 million euros.

135 million euros in total in the three-year period 2022-2024 go to the creation of a single national interconnection network for education, which ensures the coordination of data systems platforms between schools, regional school offices and ministry, homogeneity in processing and data transmission, the correct functioning of

and the creation and management of the services connected to the aforementioned activities.

The marine district off the coast of Ravenna

Stop to hydrocarbon platforms in the Adriatic off the coast of Ravenna, replaced by wind and photovoltaic. Thanks to a total of 70 million euros in the three-year period 2022-2024 for the establishment of an energy center in Adriatic to

and to create an integrated marine district in the field of renewable energy off the coast of Ravenna, in which off-shore wind and floating photovoltaics will produce electricity in an integrated way and will be able to generate green hydrogen through electrolysis at the same time.

total of 300 million euros from the year 2021 to 2024 are in favor of municipalities with populations ranging from 50,000 to 250,000 inhabitants for investments aimed at urban renewal, with a view to green transition, urban and sustainable regeneration and social inclusion. In the three-year period 2022-2024, a total of 115 million euros will be allocated to investments for the improvement of

The railway and naval network

Still on the basis of the changes made in the Budget Committee, the co-rapporteur Erica Rivolta continues, a total of 25 million euros are foreseen in the three-year period 2020-2024 for interventions priorities for the adaptation and enhancement of railway nodes and connections in Southern Italy. 35 million euros in total in the three-year period 2022-2024 for the renewal of the private naval fleets used for crossing the Strait of