A cuckoo who moved to the yard made family life unbearable - Ville, 45, estimates he has received 120,000 more years of life

Peekaboo. On May 15, it began. The cuckoo had appeared in sight of Ville, 45, on a tree top about a hundred yards from the yard of the house. The initial enthusiasm was great. Ville rushed with the SLR to take pictures of it. - I hurried the children from inside to come see, here is a cuckoo in the tree. I said you may never see the hand again. This is where it started. Photo: Ville's home album Little 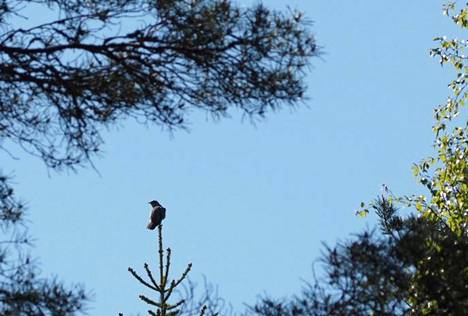 The cuckoo had appeared in sight of Ville, 45, on a tree top about a hundred yards from the yard of the house.

The initial enthusiasm was great.

Ville rushed with the SLR to take pictures of it.

- I hurried the children from inside to come see, here is a cuckoo in the tree.

I said you may never see the hand again.

This is where it started.

The next day the cuckoo came closer.

It settled on the trees at the edge of the yard.

- Colleagues in Teams began to wonder what sound came from there.

- It practically shouted from sunrise to sunset.

The following week, the cuckoo came into the yard.

- First it came to sit on the edge of the dog fence and shouted in it.

It sounded really good inside through the walls.

- From there, it gradually approached and approached, and the children began to burn nerves as it cried in the evenings behind their window in the pine.

The children began to wonder what the hand could do.

They tried to rush it out of the yard.

The dogs of the family tried the same.

- But a quarter later it always came back and kept shouting.

Eventually, the cuckoo came just under the living room window.

There it sat and shouted.

- It stared inside the window and fell in it, when that sound is already quite clear, Ville recalls the torturous days.

Behind the window spoiling the puddle match.

The cuckoo was left in the yard.

It pushed in from the kitchen window.

Sitting on the children's swing.

Dropping continued at its worst for 14 hours a day in one tube.

In the end, the cuckoo no longer even dodged the dogs and people moving in the yard, but watched the residents of the house calmly by the side.

The cuckoo no longer disappears, even if it goes out itself.

After about two weeks of torment, the cuckoo suddenly disappeared out of the yard.

It moved a couple of hundred feet further, and at times it has not been seen or heard at all.

Ville says colleagues at a distance were already used to listening to the endless fall of the hand.

He himself was relieved especially that he was now allowed to sleep peacefully at night again.

Last weekend, however, the bird returned.

It shouted one call one night at 02-04 under the children’s window.

Patience was already beginning to be tested.

- The children asked if it could be disposed of permanently.

However, the cuckoo has been calmed down, so no radical measures were taken.

This time, the shout continued fortunately for only one night.

Since then, the cuckoo has stayed away again.

Evening cry next to the children's windows.

For many Finns, the blossoming of the hand is combined with a serene, wonderful summer evening.

Maybe sausage frying by the fire.

However, the sound of a hand in the ears of Ville, who lives in a small town in Central Uusimaa, is now anything but soothing.

The remaining years of life have also traditionally been calculated from the fall of the hand.

The new inhabitants of the yard have usually been talked about as a cuckoo and sometimes as a “terrorist” among the family.

- And there may have been some curse words in front of it.

Staring out the kitchen windows and shouting.

Over the weekend, the children had bitterly recalled the day Dad had asked to come out to watch the rare bird.

The reason why it decided to freeze in the family yard is not known.

- I have talked to a few ornithologists about this, and they have said that it is very atypical for a cuckoo to enter the yard.

One ornithologist had speculated that this might be a young cuckoo.

The male cuckoo blooms to attract females to the site.

The hands do not care for or hatch their own chicks, but lay eggs in the nests of other bird species.

Indeed, Ville believes that half of the bird nests in the yard district are now full of henchmen.

- The ex-wife also put forward the theory that the cuckoo is in love with me and longs for a nesting place in my corona beard.

- But I deny all such relationship rumors.

The cuckoo has now probably disappeared because he has taken care of his spring duties.

Ville has occasionally reported on Twitter about the hands of the hand, and people on the internet have asked him about its affiliations.

The close circle has also been interested in the life of the bird.

Ville, meanwhile, hopes the cuckoo will stay away now.

All in all, the incident got Ville and his family waiting for next spring with fearful feelings.

- If the cuckoo has now found a good territory, will it be screaming next spring as well?