"Professional, you need to work very carefully with him": Putin spoke about his impressions of the meeting with Biden

Russian President Vladimir Putin said that the image of US President Joe Biden, presented by both the Russian and American press, has nothing to do with reality. During a meeting with alumni of the RANEPA Graduate School of Public Administration talent development program, the Russian leader spoke about his meeting with his American counterpart in Geneva the day before, and noted that Biden is a professional who is "completely in the material" and does not miss anything. Putin described the atmosphere at the meeting as benevolent, noting that the parties were able to understand each other's positions on key issues. 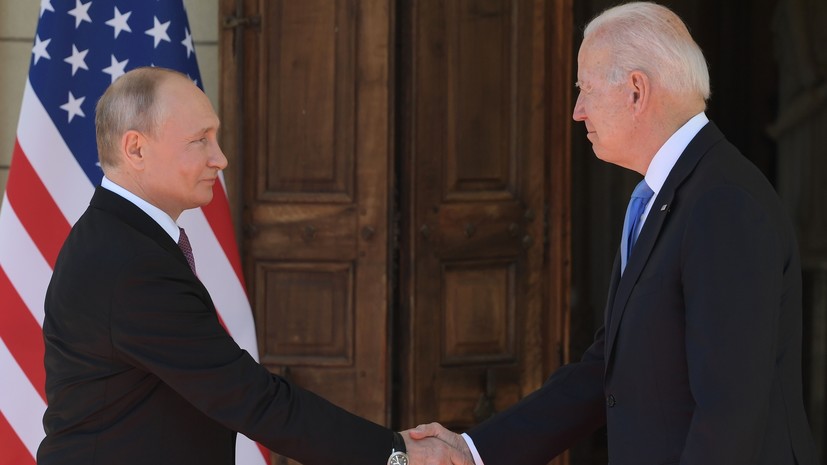 Russian President Vladimir Putin said that the image of US President Joe Biden, presented by both the Russian and American press, has nothing to do with reality.

The Russian leader spoke about this at a meeting with graduates of the program for the development of the personnel reserve of the Higher School of Public Administration of the RANEPA.

During the meeting, Putin spoke about the talks with his American counterpart in Geneva the day before and noted that Biden is a professional who “does not miss anything”.

In particular, Putin drew attention to the fact that despite the long trip and the change of time zones, Biden "looked cheerful."

“We talked with him face to face for two, maybe a little more, hours.

He is completely in the material, from time to time he looked into his notes - we all do that, ”the president said.

“And the image that they paint, it may even be a little discouraging, but there is nothing to discourage here, Biden is a professional, and you need to work very carefully with him in order not to miss something.

He himself does not miss anything, I assure you, but it was completely obvious to me, ”Putin said.

The Russian leader explained the fact that Biden "confuses something sometimes" by saying that when "people think that some things are secondary, they do not really fix their attention on it."

Americans, according to Putin, believe that nothing is more important than themselves.

“So there is nothing unusual here.

I repeat once again: he is collected, understands what he wants to achieve, and does it very skillfully, you can immediately feel it.

But at the same time, the situation was quite friendly, and, as it seems to me, we were able to understand each other, to understand our positions on key issues, ”he said, noting that during the negotiations it was possible to find those points where rapprochement is possible.

Putin stressed that there are a number of issues that are priorities for both Russia and the United States.

Such things, he said, include the problem of curbing the arms race, issues of regional conflicts, environmental problems and climate change.

At the same time, the Russian leader noted that in a situation where people do not speak, more and more mutual claims arise that could have been avoided.

As an example, Putin cited the sphere of cybersecurity, recalling that Moscow “for how many years” has been offering Washington to start a dialogue on this matter, but the American side refuses, accusing Russia of “all mortal sins”.

At the same time, the President reiterated that the number of cyberattacks from the territory of the United States is by far the largest in the world.

“But both we and they must closely monitor what is happening in this direction.

This is extremely important for us and for them.

They talked about it, ”he said.

Putin expressed the hope that Biden will be "allowed to work in peace" and stressed that Russia will defend its interests.

“We are ready to continue this dialogue as much as the American side is ready,” he concluded.

Also on russian.rt.com "No hostility": how Putin and Biden in Geneva took a step towards each other

Summit with Putin and Biden in Geneva

We will remind, on Wednesday, June 16, in Geneva at the Villa La Grange, negotiations between Vladimir Putin and Joe Biden took place.

Answering journalists' questions during a press conference, the Russian leader called the talks constructive, noting that the parties "demonstrated a desire to understand each other and look for ways to bring their positions closer."

Biden, who also gave his own press conference, said the tone of the meeting was positive and also favored a stable and predictable relationship with Russia.

During the negotiations, the presidents reached a number of agreements.

In particular, it was decided to return the ambassadors of the countries previously recalled for consultations to their duty stations in Moscow and Washington.

The leaders also agreed to start consultations between the Russian Foreign Ministry and the US State Department on diplomatic cooperation.

An agreement was reached on consultations on the issue of cybersecurity.

Another outcome of the talks was a joint statement by the leaders of Russia and the United States on strategic stability.

In particular, it said that Russia and the United States would soon launch a comprehensive bilateral dialogue on this issue, which would become the basis for future arms control and risk mitigation measures.