China News Service, Washington, June 16-US President Biden and Russian President Putin met on the 16th in Geneva, Switzerland. After the meeting, the two sides reiterated that "a nuclear war cannot be won and must not be fought," and declared that they will continue to conduct a comprehensive dialogue on strategic stability. On the 16th local time, Russian President Vladimir Putin and US Presid 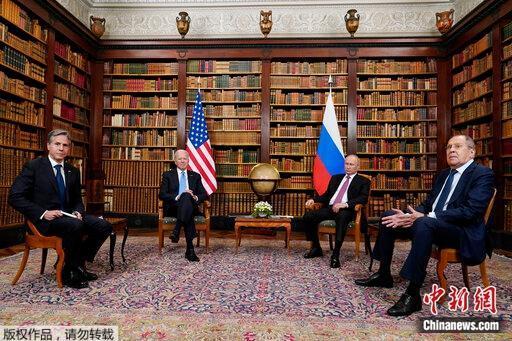 After the meeting, the two sides reiterated that "a nuclear war cannot be won and must not be fought," and declared that they will continue to conduct a comprehensive dialogue on strategic stability.

On the 16th local time, Russian President Vladimir Putin and US President Biden held talks at the La Grange Villa in Geneva, Switzerland. Russian Foreign Minister Lavrov and US Secretary of State Brinken also participated in the talks.

Geneva is the last stop of Biden's first foreign visit during his tenure, and Putin's first visit since the outbreak of the new crown epidemic.

The two shook hands at the Lagrange Villa on the shore of Lake Geneva and had a meeting for less than 4 hours.

After that, Putin and Biden held separate press conferences.

According to the "Joint Statement of the Presidents of the United States and Russia on Strategic Stability" issued after the meeting, the two sides reaffirmed their nuclear arms control commitments and stated that they will hold a comprehensive bilateral strategic stability dialogue in the near future to lay the foundation for future arms control and risk control measures. .

The statement pointed out that the United States and Russia have proven that even in times of tension between the two countries, they are capable of ensuring predictability at the strategic level and reducing the threat of armed conflict and nuclear war.

In this regard, Putin said at the press conference that Russia and the United States are the world’s two largest nuclear powers and bear a special responsibility for global strategic stability.

"We are aware of this responsibility."

Biden also stated that he and Putin have special responsibilities for controlling the relations between the two major powers of the United States and Russia.

"This set of relationships must be stable and predictable."

Putin believes that the U.S. extension of the "New Strategic Arms Reduction Treaty" for five years is a "responsible and absolutely timely decision."

"The question is what will happen next? We agreed to conduct consultations at a cross-departmental level under the auspices of the US State Department and the Russian Ministry of Foreign Affairs."

The meeting on the day was divided into two sessions.

First, a small-scale meeting of "President + Foreign Minister" was held, followed by a bilateral meeting with 5 officials from each side.

The two talks each lasted about an hour and a half.

Regarding the atmosphere of the meeting, Biden described it as "good and positive."

Putin said that the talks were "not hostile" and "quite constructive." Both sides expressed their willingness to understand each other and seek common ground.

Putin also revealed that the two sides agreed that their ambassadors will return to Washington and Moscow.

Due to the deadlock in relations between the two countries, Russia recalled its ambassador to the United States Antonov in March this year to discuss the prospects of Russia-US relations.

A month later, the United States imposed large-scale sanctions on Russia, and the U.S. Ambassador to Russia Sullivan returned to Washington.

The meeting touched on issues such as cyber security, Ukraine, and human rights, but Putin and Biden responded to these issues in a different tone at the press conference.

However, Putin denied the US accusation of Russia's cyber attack.

Biden said that if Russia crosses certain "red lines", including attacks on major US infrastructure, he will respond.

In May of this year, American companies were repeatedly blackmailed by hackers for ransom, which also led to shortages of fuel and meat supplies in parts of the United States.

Regarding the Russian opposition activist Navalny's related issues, while reiterating Russia's position, Putin mentioned the "Black People's Fate is Fate" movement triggered by the death of the African man Freud in the United States.

He said, "What we see is chaos, destruction, illegality, etc. We sympathize with the United States, but do not want this to happen on Russian territory."

Biden focused on the human rights issue in his opening remarks at the press conference.

He said that human rights issues will always be on the agenda.

This is not just about Russia’s human rights violations, but about who the United States is.

The leaders of the United States and Russia gave their own comments on the meeting.

Putin said that the meeting was actually very efficient.

"It is substantial and specific. The purpose of the talks is to achieve results, and one of them is to expand the boundaries of trust."

"I did what I was supposed to do." Biden said that the meeting achieved the three goals previously set by the US: "Identify practical cooperation areas, communicate directly, and clarify priorities and values."

He pointed out that face-to-face communication is very important, so as not to misunderstand or misjudge each other's information.

Except for the handshake upon arrival, Biden and Putin had little interaction when facing the media.