Outdoor gym with a view to increase public health in Näsåker

With local commitment and support from, among others, the Swedish Sports Confederation, Ådals-Lidens SK has built a large outdoor gym with a view of the Ångermanälven valley. There are also plans to build more training areas in other villages. 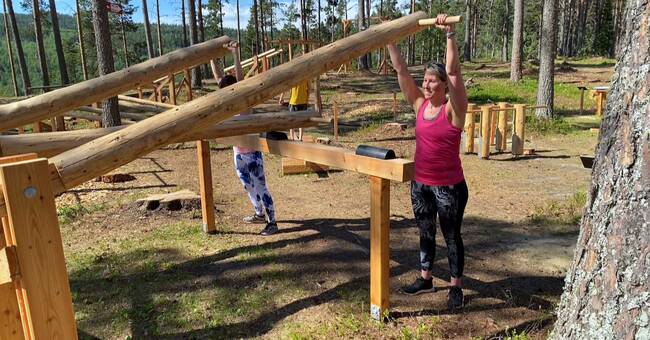 For a few weeks now, it has been possible to train outdoors in Näsåker.

The idea is that more people will be able to train more spontaneously during the walk or after the jogging trip.

- There are several benefits to having an outdoor gym.

There is unlimited ceiling height with antidepressant nature all around.

It is fresh air that makes you more efficient in the exercises, says the initiator Olof Flemström.

Plans have been around for a long time

There had long been talk of building an outdoor gym in Näsåker, but it was not until Olof Flemström, with several years of experience in outdoor training and outdoor gym, moved to Näsåker last year that things started to happen.

He took on the project in close collaboration with the sports club and then above all the exercise section.

- I contacted the association to get an outdoor gym when I moved here last year.

They took the idea and I took on the project.

There has been a lot of information search, meetings with politicians and authorities and balling back and forth, says Olof Flemström.

Wants to spread the form of training

At the end of last year, the Swedish Sports Confederation gave SEK 200,000 in support and now the outdoor gym is ready to be used.

Olof Flemström hopes that other associations in the local area will follow Näsåker's example to give more people the opportunity for spontaneous strength training.

- Yes, I contact associations around. The vision is "an outdoor gym in every village" but there may be other areas of activity for physical activity, to make the people stronger again, he says with a laugh.