Hungary, in the streets against the law banning LGBT content to minors

EU: "We will analyze the law in detail". Von der Leyen: "Very worried" 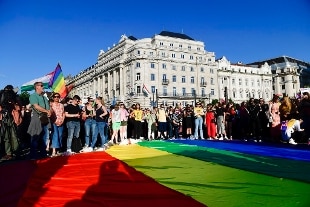 June 17, 2021 Hundreds of demonstrators in the square in Budapest have asked the Hungarian president not to ratify the law desired by the government, and approved in parliament, which effectively censors homosexuality in any content intended for minors, including films and advertising.

Sponsored by Fidesz, Prime Minister Viktor Orban's party, the law, which introduces a searchable register of convicted pedophiles, includes rules that prohibit the promotion of homosexuality or gender reassignment to minors.

Protesters collected handwritten and printed messages in which they tell their stories and their educational journey to send them to President Ader in an attempt to dissuade him from ratifying the law. According to the organizers, the new law stigmatizes sexual minorities. David Vig, director of the rights group Amnesty International Hungary, which co-sponsored the demonstration, says that "this law confuses crimes against children with the consensual love of adults." important part of sexuality education, which could lead to mental health problems and suggest to LGBT youth that their sexual orientation is a crime. We don't want to live in a society where awhole community is silenced or eradicated from public discourse, "said Vig.

"In order to ensure the protection of children's rights, pornography and content depicting sexuality as an end in itself or promoting deviation from gender identity, gender change and homosexuality must not be disposition of persons under the age of eighteen ", reads the regulatory text. Sex education classes "should not be aimed at promoting gender segregation, gender change or homosexuality," he adds.

Under the new law, an advertisement like the one launched by Coca-Cola in 2019 promoting the acceptance of gays in Hungary would be banned, as well as films and books that show homosexuality. Commercial TV channel RTL Klub Hungary has already said that films such as "Bridget Jones's Diary", "Harry Potter" and "Billy Elliot" will only be broadcast in the late evening and under 18s.

The position of the government

"When it comes to protecting our children we have no doubts: zero tolerance for pedophiles and we also insist that the education of children on sexual orientation must be protected as the only right of parents". This is the position expressed by the Office of International Communications of the Orban government, explained in a note and in a longer document published on the government portal About Hungary.

The new law, approved yesterday, "further strengthens the protection of children" in Hungary, the statement read. The new rules - continues the note - also prohibit "showing or promoting" issues such as "homosexuality and gender change to minors and only allows registered NGOs to provide information on these topics. Yes, we think this is necessary to protect children in their sexual development. We also believe that certain content should only be introduced at an appropriate age in the interest of the healthy psychological and mental development of children, "Budapest noted.

The European Commission will analyze in detail the contents of the law approved by the Parliament of Hungary. "The Commission is committed to ensuring equality and non-discrimination especially towards LGBTI + people. This concerns the relevant fundamental rights in the EU," said spokesman Christian Wigand. "We will actively analyze the law, what we do depends on what we find. You must give us the time to analyze and judge otherwise we would not be credible to the EU and to any national government", said spokeswoman Dana Spinant, recalling the commitment of the Commission on Lgbtiq rights and the 'Lgbtiq Equality Strategy 2020-2025' presented in November.

"I am very concerned about the new law in Hungary" on the prohibition of the publication of LGBT-related content for children under 18. The president of the EU Commission Ursula von der Leyen writes on Twitter. "We are evaluating whether it violates EU legislation", she adds. "I believe in a Europe that welcomes diversity, not one that hides them from our children. Nobody should be discriminated against for their sexual orientation".