Gimbe, at least one dose of vaccine for half of the Italians

Concerns about "heterologous" vaccination: Ministry of Health and Aifa shed some light on the vaccine mix 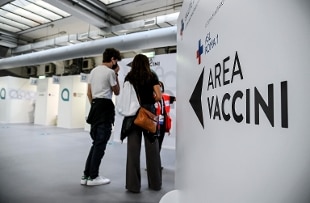 June 17, 2021 Half of the Italian population has received a dose of vaccine, but millions of over 60s are still missing. According to the weekly monitoring of

In the last week,

In the population over the age

2.66 million have not yet received even the first dose of vaccine

and 6.2 million have to complete the vaccination course.

This is the picture in detail:

Delta variant most common in Lazio

According to the latest variant prevalence survey published by the Istituto Superiore di Sanità on May 18, the Delta variant (about 60% more contagious than the English variant) is

with regional differences and a range from 0 to 3.4%: in particular, the

greatest diffusion is recorded in Lazio

However, explains the Gimbe Foundation, in the last week the Delta variant was isolated in two outbreaks in Milan and Brindisi, a sign of its greater diffusion on the national territory which is also detected by the international Gisaid database: compared to sequencing on samples collected by the May 19 to June 16, out of 881 sequences deposited 57 (6.5%) correspond to the delta variant.

Compared to the efficacy of vaccines, according to data from Public Health England, a single dose of vaccine (Pfizer-BioNTech or AstraZeneca) has an efficacy of only 33% against this variant, a percentage that rises after the second dose, respectively. , 88% and 60%. Furthermore, the latest English study (Public Health England) certifies that the effectiveness of the complete cycle in preventing hospitalizations is 96% with the Pfizer-BioNTech vaccine and 92% with the AstraZeneca one.

"For 13 consecutive weeks there has been a decline in new weekly cases. If the constant reduction in the positive / tested cases ratio attests to a reduced circulation of the virus, the progressive decrease in testing activity underestimates the number of new cases and documents the failure to recover of contact tracing, fundamental in this phase of the pandemic ", says Cartabellotta, president of the Gimbe Foundation, presenting the weekly independent monitoring of the Foundation.

"In the last 5 weeks, in fact, the number of people tested - indicates the report - decreased by 31.5%, falling from 3,247,816 to 2,223,782, with a national average of 132 people tested / day per 100,000 inhabitants and relevant and unjustified regional differences ". In all Regions, the decline in new weekly cases is confirmed (the percentage increase in Molise is irrelevant in absolute value). In addition,

deaths have also been steadily decreasing

, reaching an average of 59 per day in the last week.

- says Renata Gili, Head of Research on Health Services of the Gimbe Foundation - has brought the occupation of beds by Covid patients to 6% both in the medical area and in intensive care, with all Regions well under the alert thresholds " .

- explains Marco Mosti, operational director of the Gimbe Foundation - have been decreasing for 10 consecutive weeks and are now stable with a 7-day moving average of 22 admissions / day".

These, in detail, compared to the week previous, changes:

The Gimbe Foundation asks the Ministry of Health and Aifa to express themselves jointly with a univocal and definitive note" on the vaccine mix. This was stated by Nino Catabellotta, president of the Gimbe Foundation.

"With regard to the new AstraZeneca chaos - explains Cartabellotta - if in the current context of low viral circulation the decision to limit this vaccine to the over 60s is totally acceptable, some doubts emerge regarding the obligation to carry out the second dose with vaccine in the under 60s to mRNA, already renamed as "heterologous" ".

In those under 60 who received the first dose of AstraZeneca,

of the Ministry of Health states that 'the cycle

with a second dose of mRNA vaccine (Comirnaty or Moderna)', whereas Aifa states that mRNA vaccines "

as a second dose to complete a mixed vaccination cycle".

The possible formula used by AIFA to allow the use of "heterologous" vaccination contrasts with the peremptory one provided for in the circular of the Ministry of Health. An inconsistency that must be remedied to prevent the inconsistency between the expressions "duty" and "power" from translating into a responsibility exclusively borne by doctors, with the risk of discouraging vaccination. for this Gimbe asks Aifa and the Ministry of Health to express themselves with a joint note.

Furthermore, according to the Foundation, despite the immunological and biological assumptions and some historical precedents on the vaccine mix, the

In particular, the 4 studies cited by the CTS opinion enroll just over 800 people and measure the effectiveness of the mix only on the immune response and safety only on frequent and short-term side effects.

In other words, to date there is no evidence of efficacy of "heterologous" vaccination on severe COVID-19, hospitalizations and deaths, nor on any rare side effects.

In any case, it is essential to adapt the informed consent form to the provisions of Law 648/96 with adequate information on the benefits, risks and uncertainties of the options for the second dose after AstraZeneca.