French Cycling Championships: Alaphilippe for a first, Cavagna for a double - France 24

French Cycling Championships: Alaphilippe for a first, Cavagna for a double Épinal (AFP) Rainbow champion aims for tricolor jersey: after Thursday's time trial promised to his teammate Rémi Cavagna, Julian Alaphilippe (Deceuninck-Quick Step) will leave for Epinal on Sunday in search of a first French championship title. The world champion, who announced the birth of his child this week, dreams of expanding his palette this weekend to blue, white, red, on a Vosges course 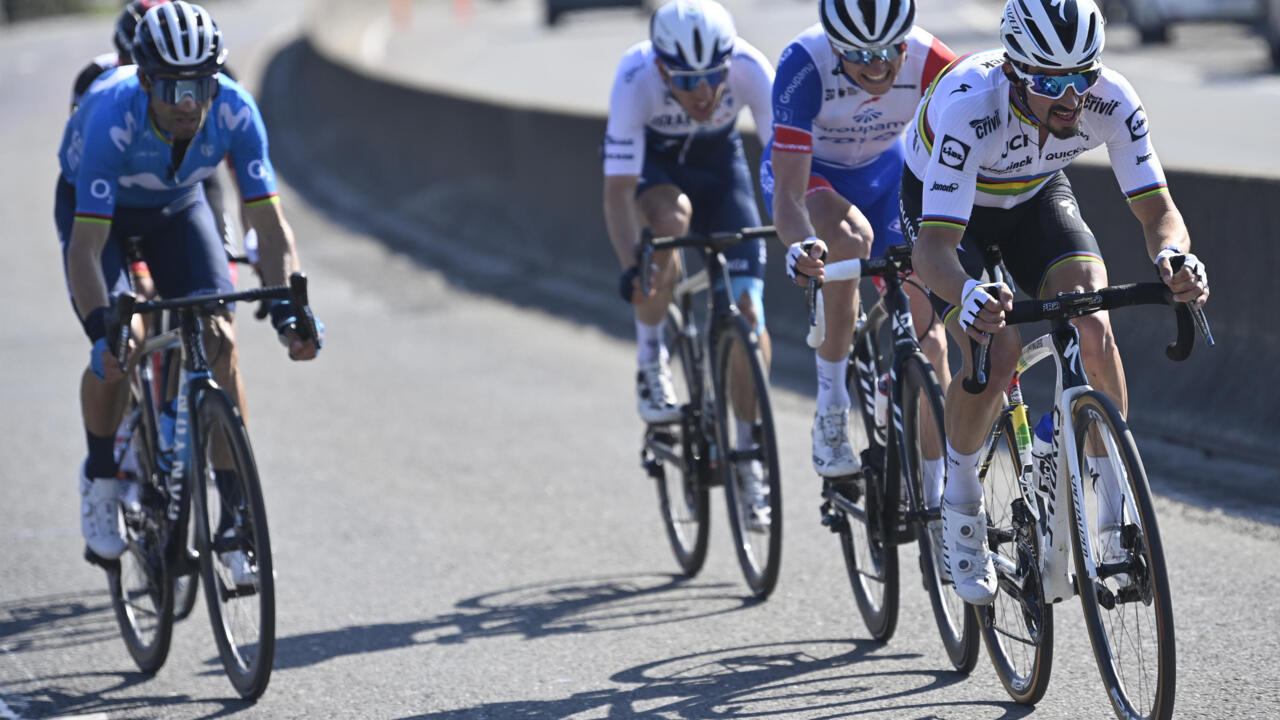 The world champion, who announced the birth of his child this week, dreams of expanding his palette this weekend to blue, white, red, on a Vosges course that should please him.

"We have a circuit with technical climbs and descents, I think the punchers will be able to express themselves", anticipates Marc Tilly, vice-president of the French Cycling Federation (FFC) in charge of the road.

On the menu for the runners who will set off from Epinal on Sunday: 242.9 km and the sixteen climb of the Côte de la Vierge (2.5 km at 6% average slope).

Also watch out for the last kilometer and a half of the Spinalien circuit, which has fourteen and a half: "tight turns" and "false flat" should skim the peloton, including the triple champion of France (2014, 2017, 2020) Arnaud Démare.

The finish line is "an uphill sprint so I think it will be difficult for pure sprinters" like the Groupama-FDJ rider or the native of Epinal Nacer Bouhanni (Arkéa-Samsic), judge Marc Tilly.

On such a course, and six days before the start of the Tour de France, Alaphilippe, very restless at the recent Tour de Suisse, has solid arguments.

But Warren Barguil (Arkéa-Samsic), French champion in 2019, or climbers like David Gaudu (Groupama-FDJ) or Guillaume Martin (Cofidis) could come and play the spoilsport.

The young guard of AG2R-Citroën, embodied in particular by Aurélien Paret-Peintre or Dorian Godon, will also try to defeat the hegemonic Groupama-FDJ, present in numbers and winner of four of the last five championships in France.

"We are not all with the same weapons at the start, it is simply a problem of numerical strength. You have to know how to manage it", warns Guillaume Martin.

"On a course like that, Julian is a favorite," said Aurélien Paret-Peintre.

But "he also knows that it is more complicated because he has a smaller team" (only Rémi Cavagna and Florian Sénéchal will accompany him on Sunday).

Launch pad for the Grande Boucle, the French championships will also pit the contenders for the Olympic selection for the Tokyo Games (23 July-8 August) against each other.

In the already certain absence of Romain Bardet (DSM) and Julian Alaphilippe in Japan, there are still places to take in the selection of five riders which should be stopped at the very beginning of July.

With 4,000 meters of positive elevation on Sunday, the candidates for the Olympics will pass an interesting test for the Olympic race, drawn on the edge of Mount Fuji.

As for the chrono specialists, it is from Thursday that they will have to do battle with a 45.6 km course between Thaon-les-Vosges and Epinal, also full-bodied.

"It's really a tough time trial, with a whole technical part, descents where you have to be vigilant, uphill parts ...", warns Marc Tilly.

"Over the 45 km, you will have to pedal all the time. In addition it will surely be hot (up to 31 degrees anticipated by Météo France, Editor's note), that will be an important factor", adds Aurélien Paret-Peintre.

Rémi Cavagna is warned: a second title in a row is not a given, and he should be wary in particular of Pierre Latour (Total Direct Energie), at ease as soon as the road rises and crowned champion of France time trial in 2017 and 2018.

Among the ladies, the quadruple champion of France (2015-2018) against the time trial Audrey Cordon-Ragot will try to recover her crown on Thursday, stolen by Séverine Eraud (Stade Rochelais Charente-Maritime) in 2019 and Juliette Labous (DSM) in 2020.

The Groupama-FDJ time specialist and the two members of the new wave will compete on a hilly circuit of 26.3 km.

On Saturday during the road race, Audrey Cordon-Ragot will also be present to defend her title.

The program of the French championship events: