Usa: Monica Lewinsky will produce a TV series on the scandal with President Bill Clinton 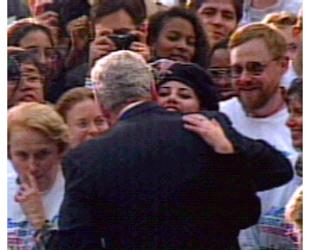 June 15, 2021 - The most famous sex scandal in White House history may have parts as yet unknown. Monica Lewinsky has signed an agreement to produce a TV series that will retrace the sex scandal she starred in the White House with former President Bill Clinton and which, the former intern promises, "will propose voices and perspectives that have not been heard. ".

Lewinsky, 47, a former White House intern, now a "Vanity Fair" collaborator, founder of a production company, Alt Ending Productions, will work with Disney's 20Th Television on the series that is part of "American Crime Story". anthology of cases that shook America. Among these is the sexual relationship that lasted two years, between '95 and '97, between Clinton, who was 49 at the time, and the intern, who was 21.

The series, which will debut on fx on September 7, titled "Impeachment", it is inspired by Jeffrey Toobin's essay, "A Vast Conspiracy," on the sex scandal that nearly caused the downfall of then President Bill Clinton.

The scandal put Bill and Monica at the center of a political storm that resulted in the first impeachment trial in over a century of a US president in office. The president was bailed out by the Democrats in the Senate.

To interpret Lewinsky will be the almost double, actress and singer Beanie Feldstein of "Booksmart", while to put the face of Clinton will be Clive Owen, who appeared in "A Romantic Guide to Lost Places" by Giorgia Farina and "The Informer" directed by Andrea Di Stephen. Edie Falco will play Hillary and Sarah Paulson of confidant Linda Tripp.

"Having met Monica for her involvement with the new edition of 'American Crime Story', we were struck by her instinct as a producer and her desire to bring unprecedented and provocative stories to the screen," said 20th Television president Karey. Burke, hoping that "Impeachment" is just the beginning of a long partnership.

In recent years Lewinsky has reinvented herself as a writer, activist and now also the owner of a production company aptly named "Alt Ending". Monica 2.0's starting point was the long article for "Vanity Fair" in 2014 in which the former sexgate intern reviewed from his personal point of view the events at the center of the media hurricane that for months, in 1998, captured the attention of world public opinion causing serious repercussions of the scandal on his emotional state.

Monica was back in charge the following year with the TED talk "The Price of Shame", followed by about twenty million people. Since then, his campaigns against cyberbullying and other forms of online harassment and intimidation have been applauded by the media.

The project with 20Th Television is not the only one in the pipeline for the former intern: there is also a documentary for Hbo Max entitled "15 minutes of shame" which, according to the streaming platform, will explore "the epidemic of shame" in contemporary culture.