This is where the lamppost ended up in the middle of the bike path: "Went a little fast at the end"

The rebuilding of Stora torg in Eslöv was almost complete when it suddenly stood there in the middle of the bike path - a lamppost. The pole, which forces cyclists to turn to avoid collisions, has now become a national celebrity. 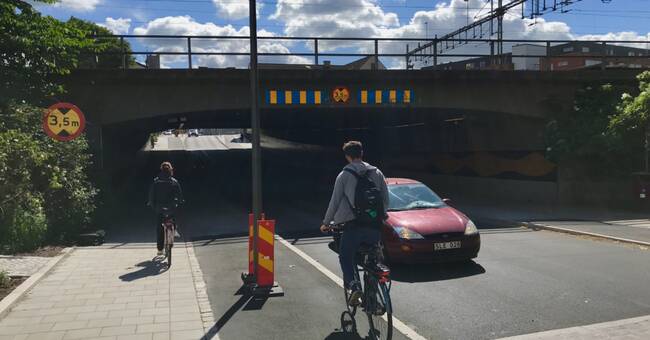 Everyone who has been through a rebuild knows that things are going wrong.

Some are fixed, others are never detected.

This very mistake was quickly discovered by all the cyclists who came rushing down to the railway viaduct in Eslöv.

- It's a pretty obvious mistake.

It is always wrong when you are working on a construction and they are corrected after the final inspection.

It is nothing special, but this is exactly what has become clear to the public, says Åsa Axén, project manager at Lektus, which is involved in the rebuilding of Stora torg.

Now that the final inspection is complete, the post will be moved a few meters.

Until then, the warning signs remain.

The lighting pole is in the middle of the cycle path that leads under the railway viaduct on Östergatan, something that Skånska Dagbladet was the first to report.

- You can quite clearly see that the pole has ended up where the lamp should end up.

So it is about an arm's length that we will now move the post, says Åsa Axén and continues.

- After the rebuilding of the square, this was one of the last parts that was completed.

And it went a little fast at the end when you wanted to be ready for the final inspection.

Äsa Axén is a project manager from Lektus construction management who is in charge of the rebuilding of Stora torg in Eslöv.

-It's about an arm's distance we are now going to move the post.