Photos: Fire caught a tree that fell on the power line - Matti witnessed a fierce danger while escaping a storm from the cottage

The canopy of the wound ignited dangerously in the fire when it got caught in the power line. Matti Halinen, 71, who escaped the storm from the cottage on Ihatjärvi's Ala-aittaroinen on Tuesday morning, witnessed a special play of storm wind and electric wires on his cottage path. A strong wind weighed on the aspens, and a total of five thick aspens fell on the road. One of them fell on an electric wire, and its three-to-four-meter canopy broke, got stuck in the wire, and caught fire in t 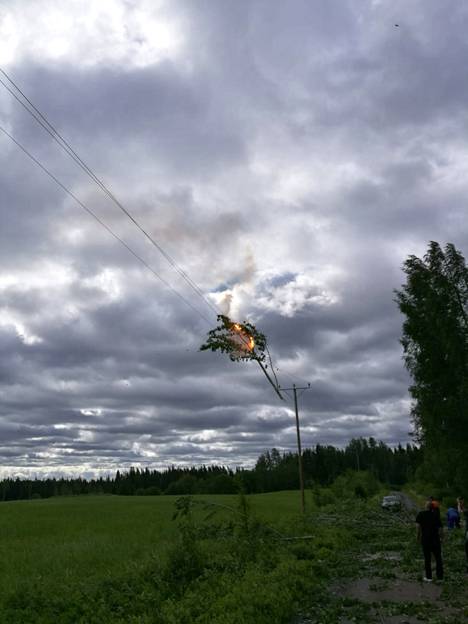 Matti Halinen, 71, who escaped the storm from the cottage on Ihatjärvi's Ala-aittaroinen on Tuesday morning, witnessed a special play of storm wind and electric wires on his cottage path.

A strong wind weighed on the aspens, and a total of five thick aspens fell on the road.

One of them fell on an electric wire, and its three-to-four-meter canopy broke, got stuck in the wire, and caught fire in the rags.

- Has he got some kind of electricity when the canopy broke and was left there on the wires, Halinen ponders.

Smoke rose from it and it banged as electricity went through it.

It was miraculous when electricity came on for a while to get back on.

I had heard that once only comes again, but this came many times after a short break, Halinen says.

A three-to-four-meter wound canopy ignited into a power line.

He looked at the situation with his wife, cottage neighbors and others who had arrived.

Chainsaws had to be put to sing to get the road in order and get home to Mikkeli.

- We were cleared for a while and watched as that canopy burned and at times struck a terrible fire and banged while that arc was in it.

The arc exploded, and it was avoided.

- That it won't hit us on the ground, I don't know about electricity, but I know that arc will kill it.

Under no circumstances should trees falling on electric wires be cleared themselves, as this can result in a fatal electric shock.

- It was supposed to be pretty close, but whenever it bumped, we went a little forward, Halinen says.

A total of six people were clearing down the trees that fell on the cottage road.

Neighboring cottages called for help on the spot.

On-duty firefighter Jarno Laikola from the South Savo Rescue Department says that it is not at all uncommon for a tree that falls on an electric wire to catch fire.

With smaller, insulated electrical wires, this is less common than with larger power lines.

If the tree rests on the power line, Laikola says that the tree should be kept at a distance of tens of meters, as the frame may conduct electricity to the ground.

The clearing of trees that have fallen on the power lines is the responsibility of the power plant, which can ensure that the electricity is out of the Warranty when clearing work begins.

If the wood is on power lines and does not cause traffic or wildfire problems, it is sufficient to contact the electricity company.

The Viena storm intensified in the morning, according to Halinen.

In the morning at the cottage it became clear that heavy stones had to be placed on top of the plantain gauze and the storm was to flee home to Mikkeli.

They set off at ten o'clock and noticed wounds falling on the road about two miles from the cottage.

The yard birch of an apartment building in Mikkeli has also been broken by the force of the wind.

There was a strong wind warning in Southern Savonia.

Small damage control tasks related to strong winds had come to the Etelä-Savo Rescue Department in the morning 41. Most of these are trees that had fallen on the road, power lines or on top of buildings.

According to the rescue service, the worst wind is already over, but damage reports typically come for days when rarely found roads are found with fallen tree trunks.

At noon in Finland, electricity was cut off from as many as 65,000 households.

According to the energy industry, almost all power outages in Finland are due to natural phenomena.

In 2019, wind and storms accounted for 35 percent of power outages annually.