The most anticipated encounter of the year will take place in a cool atmosphere, but there is also hope for small steps forward. What is exceptional about the meeting between Biden and Putin is that the joint press conference is not seen. 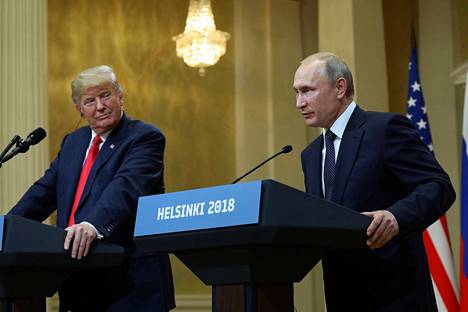 The chances of Joe Biden and Vladimir Putin achieving significant relief at Wednesday’s summit have been seen as almost non-existent, so bad are U.S.-Russia relations.

A descriptive assessment of the situation was made by Kirill Dmitriev, director of the RDIF fund responsible for Russian government investment, in an interview with CNBC in the second week.

- I compare the US-Russia relationship to a falling knife, and we have to grab it before it hits the floor.

The gap is still being tightened by the crisis in Ukraine and the consequent sanctions imposed on Russia, the electoral disruption carried out by Russia and the country's human rights violations, and most recently the support for repressive measures in Belarus.

Russia does not tolerate significant U.S. influence in the world and accuses it of seeking to isolate Russia and incite instability.

In the United States, Biden has been criticized for getting undeserved recognition just by holding the summit.

- Instead of treating Putin like a gangster who fears his own people, we will give him a valuable Nord Stream 2 gas pipeline and justify his actions at the summit.

This is a weakness, Republican Senator Ben Sasse criticized when news of the summit came.

Read more: Biden and Putin meet on Wednesday - Researchers: Putin got his goal through much earlier

Because of the criticism, Biden is believed to be extremely cautious.

Putin, on the other hand, has little or nothing to lose, even if he doesn’t bend an inch.

Putin is even believed to prefer to keep relations frozen so that the United States and the world are on their toes.

According to Putin's logic, Russia will then be listened to according to its position as a superpower.

"Russia seems to be investing in a relationship that is rubbing rather than not," said Fiona Hill, an expert at the Brookings Institute who was interviewed by the NPR and met at the US delegation at Putin's Helsinki summit.

The following are estimates of what will be observed on Wednesday in Switzerland and what is possible to achieve.

Biden’s European tour has repeatedly made comparisons with Trump’s recent trips to Europe, and the comparison is only accelerating towards Wednesday.

Biden arrives at the summit, refused by the warm handshakes of European partners, unlike Trump, who annoyed the allies and followed Putin in various twists and turns.

At the Helsinki Summit in 2018, Trump was even interpreted in front of Putin, who humbled himself, when he said he trusted Putin's word that Russia had not interfered in the US election.

Biden is only promised a hardening from Biden.

- I will tell him what I want him to know, Biden said at the beginning of his trip to Europe.

Even Putin himself made a quick Trump comparison when he said in an NBC interview that he expected Biden to have “less impulsive” decisions than Trump.

Putin, on the other hand, described Trump as an “exceptional, talented person”.

No similar definitions emerged from Biden.

Biden and Putin have not shy away from even commenting in person before their meeting.

Biden previously raised the fuss by characterizing Putin as a “killer,” and Putin acknowledged back with the Russian saying “whoever barks is himself”.

Biden was interpreted in his comment as wanting to show Putin that he is ready to take on a tough role in the relationship if necessary.

Prior to the meeting, Biden has also warned that Russia will face the consequences of its actions.

At the summit itself, there is an interest in whether the same icy line will continue.

What is the chemistry of men between the two?

Vice President Biden and Prime Minister Putin met in Moscow in March 2011. Since then, Russia has turned in an increasingly authoritarian direction and relations between the two countries have steadily weakened.

In an NBC interview, Putin was already more conciliatory and analytical.

- I'm used to attacks… nothing surprises me, Putin said.

He also described Biden as a “career politician” who has spent his entire adult life in politics.

Putin also noted that Trump was a completely different tree when this came from outside politics.

3. What happens behind the scenes?

However, the encounter between Biden and Putin's chemistry in Switzerland cannot be followed very closely, as there will be no joint press conference.

This also eliminates the comparison with the Trump and Putin show in Helsinki.

President Joe Biden held a press conference in conjunction with the NATO summit in Brussels on Monday.

Biden and Putin only hold their own press conferences in Switzerland, which is a stark departure from previous summits.

Biden explained his decision by wanting to stay on the line alone.

“This is not a competition for who performs best at a press conference or who tries best to embarrass another,” Biden said.

- This is about making clear what my conditions are for better relations with Russia.

The best way is to have our meetings and discussions hal I don’t want the focus to be on whether or which hand talked more.

The Biden-Putin summit will be held at Villa La Grande in Geneva, Switzerland.

Biden’s decision, on the other hand, has been considered ingenious because in this way he takes away from Putin the means to shine in the limelight.

On the other hand, Biden’s opponents and the Russian media can cast doubt on whether the older president doesn’t think he can cope with the word with Putin.

In the absence of a press conference, the men would probably have been seen in public only at the beginning of the meeting and perhaps at a session for photographers - from which a lot of conclusions about body language are likely to be drawn then.

After all, the information leaked from behind the scenes of the meeting to the media will play a key role.

Leaks can also be intentional to emphasize your role.

4. Where is the progress?

As no progress is expected on difficult issues, attention will be drawn to those where it is possible.

- We're not looking for conflict.

We are trying to resolve actions that we feel are inconsistent with international standards.

That is number one.

Issue number two is where we can work together, Biden said during the summit.

The meeting is expected to at least agree on measures to combat the corona and climate change.

If all goes well, countries can also commit to maintaining stability on the Korean Peninsula or reach a consensus on issues such as Iran’s nuclear program and the fight against terrorism in Afghanistan following the future US withdrawal.

One preliminary assessment is that the summit would bring diplomatic relations closer to normalcy.

Ambassadors from both countries are currently out of office due to controversy, the U.S. embassy in Moscow is understaffed, and Russians are forced to apply for visas to the U.S. from third countries.

"Work must be done to restore diplomatic relations to at least the minimum level that the United States can operate in Russia and vice versa," said Angela Stent, director of the Center for European and Eurasian Studies at Georgetown University.

Both countries have used the same term in advance for their summit goals: “strategic stability”.

This means that countries would reach a situation where constant pecking would diminish and they would not be threatened by drifting directly into armed conflict.

The goal is based on a principle that is recognized by both countries.

- Russia still has the largest nuclear arsenal on Earth with the United States.

Russia is still a permanent member of the UN Security Council.

Like it or not, we need to work with Russia on certain key challenges, outlined Biden’s Russia assistant Eric Green last week.

Swiss soldiers guarded the Russian mission in Geneva on Monday.

The most welcome and stabilizing decision for the rest of the world would be to continue disarmament negotiations.

They could be built on the basis of the Start Nuclear Non-Proliferation Treaty, which was extended early this year.

However, James Acton, an expert at the Carnegie Institute for Peace, told Foreign Policy that the interests of the countries are very different and therefore difficult to agree.

The United States is concerned about Russia’s new weapon inventions, such as nuclear torpedoes and cruise missiles, while Russia is being ravaged by conventional weapons, namely U.S. missile defense and precision missiles.

Neither of these is flexible.

However, experts see that in one theme, interests can coincide.

"In cyber affairs, progress can be made just under the umbrella of" strategic stability, "commented Andrea Kendall-Taylor, a security incubator at the Center for New American Security, who previously served as Biden's Russia expert, who was interviewed by FP.

- Even smaller cases can quickly escalate into the use of nuclear weapons, so we want to set rules and reach consensus on these various issues.