Juha Malinen has encountered the inhuman demands of top football as the coach of the Finnish national team for boys under 21 years of age. 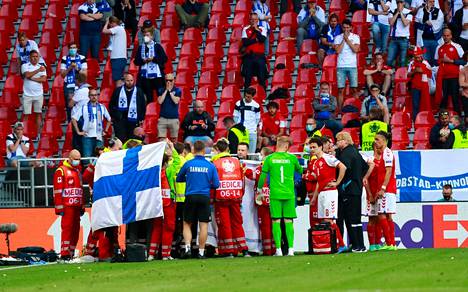 The Christian stoppage of Christian Eriksen from Denmark in the middle of the Finnish-Danish European Championships shocked the football world on Saturday.

For everyone's relief, Eriksen is now in the hospital and recovering.

The reason for the cardiac arrest is still obscured and it is, of course, an isolated case, but the event gave new impetus to the debate in international football over the years about how top footballers are today under an incomprehensibly heavy burden.

- The number of games in, for example, the Premier League or the Spanish and Italian leagues, combined with international games in both the club and national teams, is really tough, says Juha Malinen, the coach of the Finnish national team for boys under 21 years of age.

This season, most of the top futures matches have been booked for Portugal and Manchester United’s Bruno Fernandes, who has been on the field in 68 matches this season, according to Transfermarkt.

So he has played the match roughly every four days for the previous nine months.

Malinen aptly calculates the relentless schedule of the top players, which is overwhelmed by the domestic leagues and Cups, the club's European games and the national team games.

- Normally, the season ends at its worst in late May, when the Champions League final is played.

If there is a value summer, then the national team will meet, and the value tournament will be played around mid-July, when the training camp for the next season has already started, Malinen lists.

- If a player has been to a training camp in the last summer in late July, played the whole season, played all the national matches, then prepared for the championships and played them, then it is a year without a holiday.

These come to the top player every two years.

That is, the top footballer may be in a situation where a break from ruthless top sports comes a few weeks every other summer - and during the Corona period, the endless cycle of top games has only grown.

The top leagues in football were completed during the summer of 2020, and the Champions League winner was decided in August.

Immediately after that, a new season began, from which Europe's tops went straight to the European Championships, which are now underway.

The case of Christian Eriksen made many think about the strain on top footballers.

The race ends in mid-July, and then there is already a rush to prepare for the new season.

So some players are promised more than two years of wrinkling without a notable vacation.

Based on the forecast signs, the hurry is only increasing.

In 2024, the Champions League will expand to a 36-team tournament, with each team playing at least ten matches instead of the current six.

After Eriksen's case, Asmir Begovic, the goalkeeper of AFC Bournemouth, who plays in the Premier League, wrote about the subject.

- The health and well-being of players has been neglected for a long time.

Penetrating more and more games into a condensed time window will only lead to bigger health problems.

Hopefully those in power will pay attention to this at some point, Begovic tweeted.

One extreme example of the accumulation of games was seen in December 2019, when Liverpool played two matches on consecutive days on different continents, one in the English League Cup and the other in the World Cup World Cup tournament in Qatar.

Liverpool coach Jürgen Klopp and Manchester City’s Pep Guardiola have been among the loudest to demand relief from huge match congestion.

- It just prays every day and hopes everyone will survive the game without any problems, Guardiola updated last October according to the Goal website.

- Of course, business has accelerated for many years, and we always try to accelerate it.

Training games, for example, on the national team become mainly games of the League of Nations.

There is always a risk involved, emphasizes Timo Furuholm, Captain of Inter, who plays in the Veikkausliiga.

- At some point you don’t want to succeed and it is not possible to combine the necessary recycling of players.

Then we are in a critical area.

Timo Furuholm hopes that the players' voices will be heard better.

Malinen also reminds that the rush is already weighing on top-level junior players.

The head coach under the age of 21 has repeatedly come across situations where the players ’calendar seems almost inhumanly complete.

- In Finland, for example, last year due to corona pressure, some club teams had their own game the very next day, when we had a national match, Malinen recalls.

- Even now, when we played (at the beginning of June) on Tuesday in Slovakia, on Thursday some of our players had matches for the club team.

Sure, we have smart coaches, and these players weren’t played then.

It is especially difficult for players in national team camps when a lot needs to be achieved in a short time.

In Finnish camps, physics coaches make sure that the workload of the players does not grow too hard.

- I personally feel guilty in the way that when we have two events on the national team, ie 15 days to create a way of playing and a winning team, we have to do quite a lot of things.

The strain must be monitored very closely.

Still, what needs to be done is a little more than what you are used to, Malinen says.

- When a young player who should be full of enthusiasm and energy tells me that he needs a holiday now ... This is something that makes me ring the bells - not because of what this individual has, but what this means as a whole, Malinen ponders .

On Saturday - just hours before Christian Eriksen's illness - the FIFPRO, the international organization for football associations, released a statement calling for a shift towards a more sensible match schedule.

- The most important thing in the future would be to listen to the voices and opinions of the players as well.

However, they provide all that entertainment, and I think they should be given a bigger space to talk about these things and the direction the species is being taken, Furuholm also piles up.

Malinen is hopeful that more attention will be paid to players' resilience in the future.

- We are dealing with things differently worldwide.

Increasingly, facts and opinions of professionals are being used.

There are signs that there is concern about this, and there is a desire to be able to make a difference.

Read more: Why did Christian Eriksen's heart stop in the middle of the game?

A Finnish expert will explain the possible reasons

Read more: The coach's demands say a lot - this is Christian Eriksen, who suffered from cardiac arrest