Saman case. The video of the parents fleeing to Pakistan. Resumed searches, inspected the greenhouses

According to what the Corriere reports, at first the Carabinieri of the Arma also had the suspicion that the woman who is seen in the images was precisely the missing girl, perhaps forced to leave to implement the plan of the arranged marriage in her country against his will 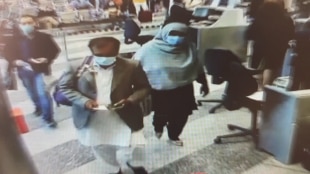 June 14, 2021New day of searching for the body of Saman Abbas, the Pakistani girl who disappeared from Novellara, in the Reggiano area since 30 April. The Reggio Emilia prosecutor suspects that the 18-year-old was killed by her family because she opposed an arranged marriage at home. We continue to search in the area of ​​the farm where the relatives of the young woman worked: the carabinieri pass through the sieve, inch by inch, some greenhouses where the harvest of watermelons has been completed. Still today, excavation will continue at the points indicated by the electromagnetometer, an instrument capable of sounding the ground in depth. Finally, the coring of the subsoil will continue to facilitate the work of the canine units.

On the investigative front, while detained in the Reggio Emilia prison, Ikram Ijaz, one of Saman's cousins ​​- the 28-year-old denied any responsibility in front of the investigating judge - continues the hunt for the other fugitives who fled abroad. The parents, her uncle (considered by the investigators to be the material author of the crime) and another cousin of the young woman are also investigated for the murder of the 18-year-old. The last two are fleeing to Europe, this is the hypothesis of the investigators who are in constant contact with foreign authorities through the international police cooperation service of the Ministry of the Interior. Saman's parents, on the other hand, returned to Pakistan: an international rogatory letter will be issued for them.

In the meantime, the images of the Malpensa security cameras - broadcast by Tgr Emilia-Romagna and then by Tg1 Rai - show Shabbar Abbas, 44, and his wife Nazia Shaheen, 48, Saman's parents who are at the airport Lombard about to board the flight that would take them to Pakistan. Tickets were purchased from Saman's uncle, Danish Hasnain, on April 26th. Officially the reason why the couple left Italy is to reach their native country where a family member was in very serious health conditions. Danish Hasnain is the man accused of having materially committed the murder of Saman. In this video we see the father lowering his mask to be recognized, followed by his wife. The two then recognize each other at passport control,before boarding the direct flight to Pakistan. The carabinieri acquired these images on May 3, requesting them from the Malpensa Polaria, which sent them shortly after the request of the investigators from Novellara (Reggio Emilia).

According to Corriere reports, at first the Carabinieri of the Arma also had the suspicion that the woman seen in the images was Saman, perhaps forced to leave to implement the plan of the arranged marriage in Pakistan against the his will. The turning point came when the police showed the video frames to people close to the Abbas family, who recognized Nazia Shaheen without hesitation in that woman. To give the certainty of identification was the particular posture of the woman's walk, very different from that of Saman. It was at that moment that the investigations took another turn and the kidnapping investigation began. However,from that moment the scenario has further changed and the turn taken by the investigation is that of a murder.

The mother according to witnesses: "Saman is a shame for the family"

According to some indiscretions reported by the 'Gazzetta di Reggio' it would seem that a cousin, probably the last close relative, bought the plane tickets to Pakistan for Saman's parents of the family still present in the lower Reggio area. He speaks Italian well, has not stopped working in the fields where other family members also worked, lives with fellow countrymen and was heard by the carabinieri as a person informed about the facts, searched without success. It was he himself who said he bought the tickets at an Indian travel agency in Novellara on April 26th. "I have debts there and you have to go there," Saman's father, Shabbar Abbas, would have told him.

Some newspapers then report a testimony of a person who took part, in recent months, in the meeting in which the social services communicated to the family that Saman would be placed in a protected house, far from those who wanted to take her to Pakistan by force to do it. to marry. "It's a shame for our family," the girl's mother said in October 2020. Saman then returned home in early April, only to disappear. Even today the carabinieri will continue to search for his body, near the house in Novellara.