At the age of Duanyang, the rice dumplings are fragrant and curled up, and then read Qu Yuan.   "I am more than what my heart is good, but I still have no regrets after nine deaths." "The road is long and long, I will search up and down" "Long rest to cover up my tears, and mourn the hardship of the people's livelihood"...for thousands of years Qu Yuan’s spirit of patriotism and concern for the 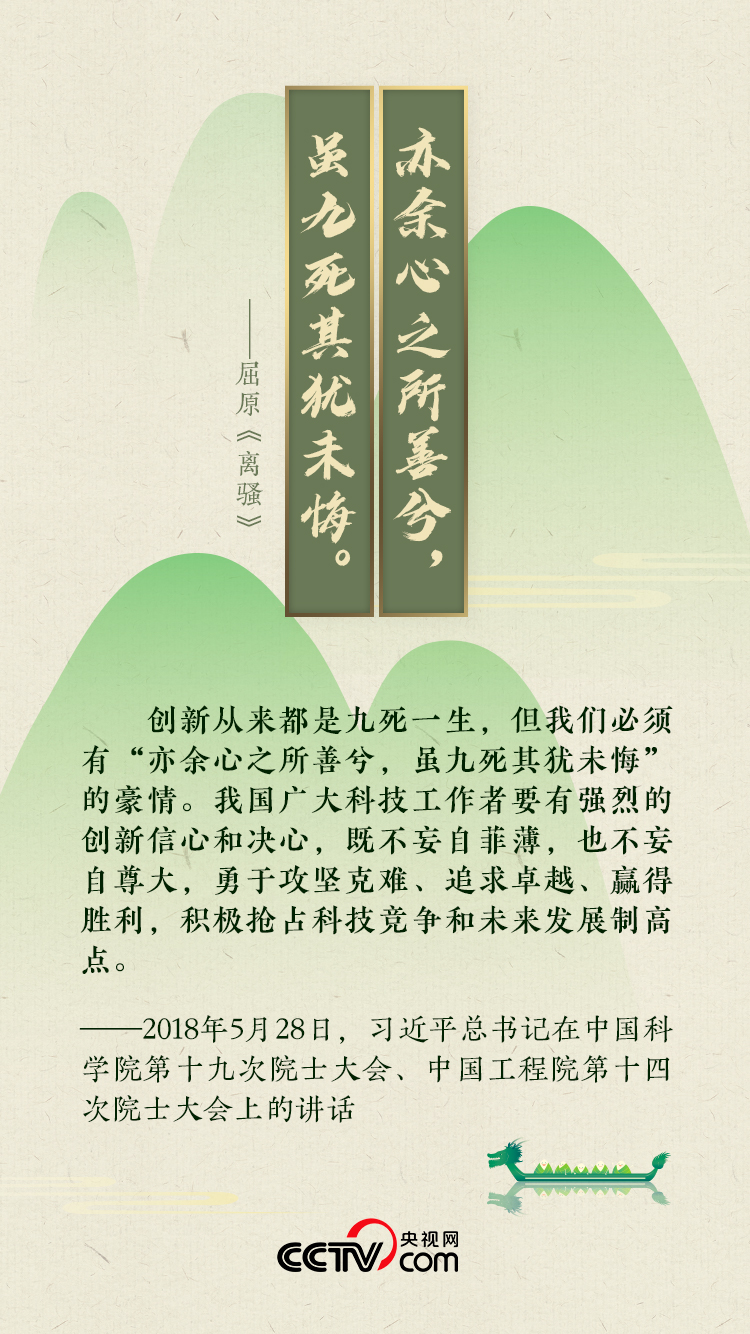 At the age of Duanyang, the rice dumplings are fragrant and curled up, and then read Qu Yuan.

"I am more than what my heart is good, but I still have no regrets after nine deaths." "The road is long and long, I will search up and down" "Long rest to cover up my tears, and mourn the hardship of the people's livelihood"...for thousands of years Qu Yuan’s spirit of patriotism and concern for the people, adhering to the truth, and preferring death to death has been sung throughout the years through a poem.

The hero has a unique ambition, and his friends have survived the ages.

General Secretary Xi Jinping has mentioned Qu Yuan on different occasions and quoted famous lines in Qu Yuan's poems to explain his thoughts, express his love and aspirations, and encourage countless Chinese who share the same blood and like-minded people with Qu Yuan to move forward, arousing resonance that spans thousands of years.

"It's more than the kindness of the heart, even though he died nine times, he still hasn't regretted it."

"It is also good for the heart to be kind, even though he has died nine deaths, he still has no regrets." This is the strong voice of "ideal" and "pursuit" that Qu Yuan has played for future generations while standing in the upper reaches of history. It is full of persistence and virtuousness to the noble virtues. The nostalgia for the homeland of the motherland also reflects the poet's firm belief in pursuing light.

General Secretary Xi Jinping quoted "I also have more than one heart’s kindness, even if I die, I still have no regrets", expressing China’s belief in adhering to the road of independent innovation in science and technology. This is the focus of China’s development and is also the "heart of all Chinese people." What is good".

In the face of numerous difficulties and obstacles at home and abroad, and the ups and downs and dangers in the innovation process, with the firm determination of "nine deaths but never regrets", by taking advantage of technology and innovation, can we achieve a new era of China "The beginning of the morning is in Cangwu Xi, and in the evening it reaches the county nursery" leap.

"The road is long and long, I will search up and down"

In July 2016, at the celebration of the 95th anniversary of the founding of the Communist Party of China, General Secretary Xi Jinping uttered Qu Yuan’s famous line, "The road is long and long, I will seek from top to bottom", calling on all party comrades to not forget their original intentions and be brave to change Innovate and keep going.

More than 2,300 years ago, Qu Yuan's "who preached at the beginning of the ancient times? Where can we test it out?" was the philosopher's "ultimate question".

The current Chinese people's search is clear and concrete, and it is to promote reform and innovation in a targeted manner.

"Change and innovation are the fundamental driving force for the advancement of human society." In the long-term practice of governance and administration, General Secretary Xi Jinping deeply realized the tremendous role of seeking innovation.

Since the 18th National Congress of the Communist Party of China, the curtain of comprehensively deepening reform has been opened. Reforms involving economic, political, cultural, social, ecological civilization and party building have been steadily steadily progressing to the deep water area to benefit the people.

Facing the world, my country has taken the initiative and worked hard, and pioneered the construction of a new type of international relations, a "community with a shared future for mankind", and a joint construction of the "Belt and Road"... Under the strong leadership of the Party Central Committee with Comrade Xi Jinping as the core, the hard-working Chinese people With the courage to explore and enterprising and the courage to swallow the mountains and rivers, on the road of reform and innovation, we have written a series of reform songs of continuous self-improvement and tenacious forge ahead!

"Those who do always succeed, those who do always come." The road of reform and innovation has always been thorny, which requires us to have the courage to dare to do something and the responsibility of self-innovation, and to seek up and down the "goodness of the heart".

"Long rest to cover up one's tears, and mourn the hardship of the people's livelihood"

Qu Yuan's whole life is dedicated to the people and sympathetic to the common people. His thoughts of loving and caring for the people in his poems can still resonate with people today after a thousand years.

"I will have no me and live up to the people." On March 22, 2019, Xi Jinping's affectionate expression when answering a question from the Speaker of the House of Representatives of Italy, Fico, was a contemporary interpretation of the two thousand years of "people-oriented thinking" of the Chinese nation.

Governing the country is perpetual, while benefiting the people is the foundation.

In November 2012, when the 18th Politburo Standing Committee met with Chinese and foreign reporters for the first time, General Secretary Xi Jinping said frankly: "The people's yearning for a better life is our goal." On December 31, 2017, General Secretary When delivering the 2018 New Year’s message, he pointed out: "Benefiting the people is the greatest achievement." During the National Two Sessions in 2020, when the General Secretary participated in the deliberations and exchanges of the Inner Mongolia delegation, he mentioned "the people" 28 times. When he talked about fighting the epidemic, he was profound. He pointed out: "The people are supreme, life is supreme, and the safety and health of the people can be protected at all costs." In February 2021, at the party history study and education mobilization meeting, the general secretary emphasized: "The country is the people, and the people are the country."

Looking back on the past, when the light of history shines into reality, in the journey of building a modern socialist country in an all-round way, generations of Chinese people will continue to struggle and advance triumphantly.