“It turned out to be uncompetitive”: Ukraine announced its readiness to discuss “compensation” for Nord Stream 2

Kiev will be ready to consider the possibility of negotiations on "compensation" in the event of the launch of Nord Stream 2, said the head of the Ukrainian Foreign Ministry Dmitry Kuleba. He noted that Ukraine "does not necessarily agree" to the proposed proposal. Commenting on the words of the Ukrainian diplomat, the State Duma noted that Kiev created a threat to the economic interests of Russia and a number of European countries, as a result of which these states secured themselves by building new infrastructure facilities. The expert community noted that the risk of Ukraine to be an unclaimed transit country for gas can only be explained by the non-competitiveness of Kiev in the gas sector. 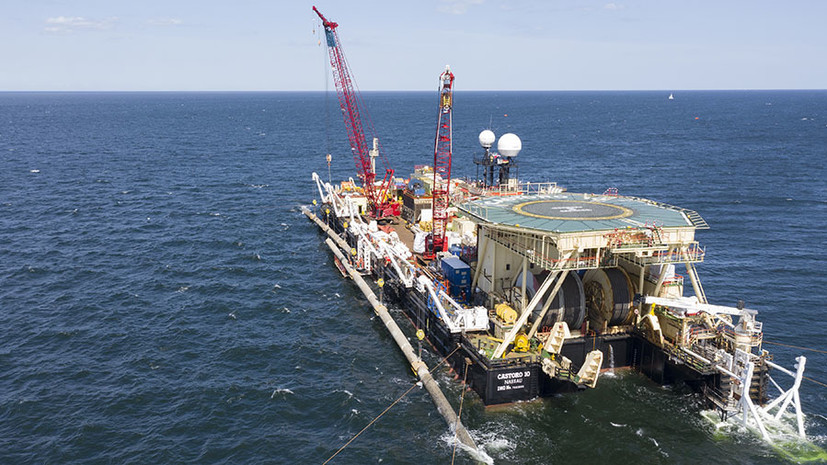 Ukrainian Foreign Minister Dmitry Kuleba said that Kiev would be ready to consider the possibility of negotiations on "compensation" in the event of the launch of Nord Stream 2.

“We realized that there were negotiations between Germany and the United States.

We did not participate in them.

If we are asked to talk about compensation, we will consider it.

However, we will not necessarily agree with what will be offered, ”Kuleba said in an interview with Die Welt.

He did not specify from whom exactly such a proposal could be expected.

According to him, Kiev perceives Nord Stream 2 as a “security threat”, not only an economic one.

“Therefore, we say that the gas pipeline should be used as a lever to induce Russia to play a constructive role in the peace process in eastern Ukraine,” the head of the Ukrainian Foreign Ministry said.

Note that Russia has repeatedly emphasized that Moscow is not a party to the internal Ukrainian conflict.

The Nord Stream 2 pipeline runs from Russia to Germany along the bottom of the Baltic Sea.

The highway passes through the exclusive economic zones and territorial waters of five countries - Germany, Denmark, Sweden, Finland and the Russian Federation.

The completion of pipe-laying of the first string of the Nord Stream 2 gas pipeline was announced by Russian President Vladimir Putin, speaking on June 4 at the St. Petersburg International Economic Forum.

Also on russian.rt.com "Gas filling works are starting": the operator announced the completion of the offshore section of the first string of Nord Stream 2

The State Duma noted that Kiev is trying to "create new windows of opportunity", feeling that the resources for obtaining support from the West are becoming less and less.

In an interview with RT, Dmitry Novikov, first deputy chairman of the State Duma's international affairs committee, noted that Kiev "is trying to squeeze out dividends," appealing to the fact that gas was previously pumped through Ukraine.

“Ukraine had a certain percentage from this, now the loss of these dividends needs to be compensated for.

The question arises, why on earth?

That is, everything is turned upside down and people are trying to make money on this, ”the parliamentarian noted.

Deputy Director General of the Institute of National Energy Alexander Frolov noted that from the point of view of an outside observer, statements about "compensation" look at least strange.

“Ukraine provides services for the transit of Russian gas, while Russia is building its own gas pipeline.

Ukraine's services are either not needed or will be needed in limited quantities.

Hence the question, whose trouble is it?

This is Ukraine's misfortune.

She provided services, and she turned out to be uncompetitive in this area.

Nobody owes her anything outside the current contract, ”the expert said in an interview with RT.

In his opinion, Gazprom will adhere to the terms of the gas transit contract in force until 2024.

“In this regard, it should be noted that there is no point in“ draining ”the Ukrainian directions even after the launch of Nord Stream 2,” Frolov said.

“So Ukraine has nothing to fear until 2024, and after 2024 it will have no legal grounds for claiming compensation.”

Earlier, a Ukrainian political scientist, director of the Institute for Policy Analysis and Management Ruslan Bortnik expressed the opinion that Nord Stream 2 could be beneficial for Ukraine if it becomes its “co-owner” and receives part of the pipeline.

“Okay, we understand that Nord Stream 2 can be more profitable for you.

Let us, because we are losing, this is a political issue, let us make Ukraine a co-owner of Nord Stream 2, give us 5-7-10% so that we can compensate for our losses, ”he said.

According to Bortnik, part of the gas that will pass through the pipeline may also enter Ukrainian storage facilities.

Also on russian.rt.com, the analyst called on Kiev for a constructive dialogue on the issue of gas transit

"Let's talk about this, that Ukraine will become a participant in Nord Stream 2 ... Sell or transfer to the Ukrainian Naftogaz 5% of the cost of this" stream "- and we will be shareholders, we will make money on it," RIA quoted him as saying. News.

In his opinion, in this case, Gazprom will consider it.

“You cannot win the competition without fighting,” Seele said in the Moscow.

At the same time, Vladimir Putin reminded earlier that Russia has a valid contract for pumping gas through Ukraine. According to him, if there were normal relations between the two Moscow and Kiev, they would pump a significant part through Ukraine. He recalled that now Ukraine receives $ 1.5 billion from Russia for transit, and could receive $ 3-5 billion.