Barrage Top 14 / Pro D2: Biarritz finds the elite after a crazy derby Biarritz (AFP) Breathable! Epic! Historical! In a boosted atmosphere, the Top 14 / Pro D2 dam kept all its promises on Saturday in terms of engagement and dramaturgy, with a penalty shootout victory from Biarritz over Bayonne. The BO will therefore find the elite next season in place of its unfortunate neighbor from Bayonne. Carried by their hot public, the Biarrots, in the second division for 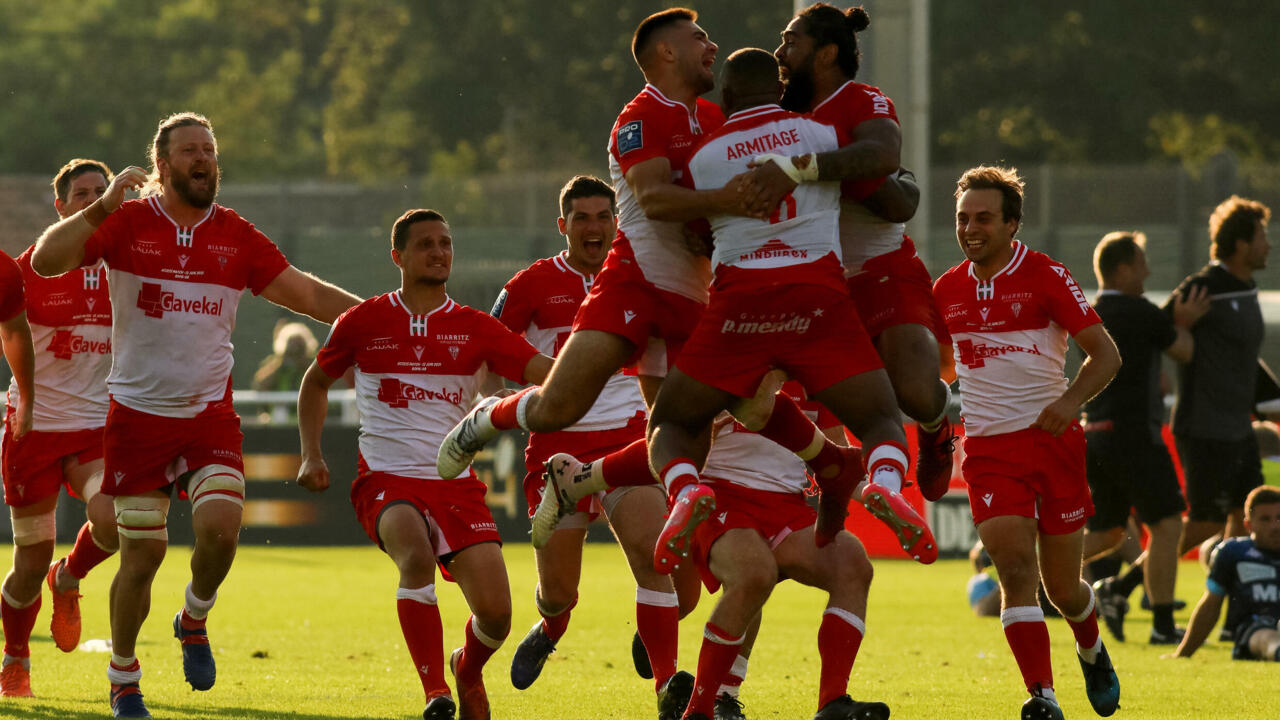 In a boosted atmosphere, the Top 14 / Pro D2 dam kept all its promises on Saturday in terms of engagement and dramaturgy, with a penalty shootout victory from Biarritz over Bayonne.

The BO will therefore find the elite next season in place of its unfortunate neighbor from Bayonne.

Carried by their hot public, the Biarrots, in the second division for seven years, had the nerves more solid against the posts, after 100 minutes of a huge fight in this 113th derby in history between the enemy brothers of the Basque Country, one of the most pronounced rivalries in French rugby.

The foot of the third line and captain of the BO, Steffon Armitage, did not tremble, from the 22-meter line, to send his people to the Top 14. And deliver his supporters who immediately invaded the field after having held their breath for a long time .

The regulatory gauge of 5,000 supporters was largely exceeded in the stands of the sports park of Aguiléra, almost covered in red (a lot) and sky blue (a little) in a very relative respect for health instructions.

The tone had been set as soon as the coaches of the two teams arrived, at the usual nap time, under the smoke and / or the boos.

He went up a notch at the entry of the players on the lawn, in a mad clamor and perhaps heard, depending on the direction of the wind, to the suburbs of Bayonne, barely five kilometers away.

In this pre-Covid atmosphere, undoubtedly the hottest of the rugby season in France, the start of the match was inevitably intense, with a huge commitment from both sides, three players released in the first quarter of an hour and a try refused to the winger of Rowing, Joseva Ravouvou, for a forward pass.

Carried away by their enthusiasm, the Biarrots narrowly missed approaching the opposing endpoint, but they managed, in this permanent disorder, to foil the Bayonnais who fell into the trap of emotion.

However, they had prepared for it this week, with training in noise to get used to the presence of the public again.

But a derby cannot be anticipated, it is experienced, and the gap division between the two Basque rivals has been erased by the stakes.

In such a tense and closed game, the decision did not matter much.

To this sin of pride of the resident of Top 14, went twice in touch with a quarter of an hour of the end rather than taking the points.

At this drop that the Bayonnais did not dare to attempt with the siren during an endless sequence of shelling on the line, ultimately unsuccessful.

Or this missed shot, under pressure, by the young Aymeric Luc, yet one of the best players in Rowing this season.

Dryly beaten by Perpignan (33-14) last week in the Pro D2 final, Biarritz was able to seize its second chance in this completely crazy derby.

It is a personal success for Jean-Baptiste Aldigé, controversial president of the BO.

Installed in June 2018 at the head of the club by its new majority shareholder, the businessman Louis-Vincent Gave, to whom he is close, the 37-year-old leader, divisive and atypical character, detonates in the world of rugby.

In conflict with the town hall about the development of Aguiléra, he has been waving for months the specter of a relocation of his club to ... Lille.

He reiterated Friday, on the eve of the match, that his club was "absolutely not ready" for the Top 14 "in terms of structures".

"We must consider the path traveled over the past three years," he noted, however.

Threatened with administrative demotion in Federal 1 on his arrival, the BO, five-time champion of France, now finds the elite and has probably not finished talking about him.