USA. "Except for a cough", speaks the fisherman swallowed for a few seconds by a whale

I have bruises all over, but no broken bones. I thank Provincetown rescuers for their care and help, "he wrote, after being briefly hospitalized. 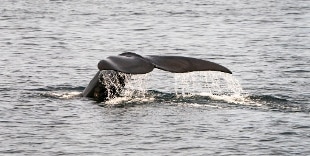 June 12, 2021 It is a story of Pinocchio, which could be taken for a hoax if it were not considered credible by whale specialists: a lobster fisherman from Massachusetts was "swallowed" for a few seconds on Friday by a humpback whale, before being thrown back into the sea. , alive, and able to tell his story.

"Hello everyone, I just want to clarify what happened to me today," wrote the fisherman, Michael Packard, a native of Provincetown, nearly 200 miles east of Boston, after the news reached the ears of the local Cape Cod newspaper. Times. "I had dived in search of lobsters when a humpback whale tried to eat me. I thought I was going to die," says Michael Packard who, stirring inside the mammal, annoyed him so much that the whale coughed and he managed to save himself. "I have been in his closed mouth for 30-40 seconds. I have bruises all over, but no broken bones. I thank the Provincetown rescuers for their care and help," he wrote, after being briefly hospitalized.

When questioned by the local Boston CBSN, Michael Packard said he was about 13 meters deep when "suddenly I felt this huge blow and everything went black".

At first he thought he was bitten by a shark.

But while he continued to breathe, thanks to his underwater regulator, he did not feel any great pain.

'Oh My God, I'm In A Whale's Mouth': Lobster Diver Says He Was Nearly Swallowed By Whale Off Cape Codhttps: //t.co/56CXKcRinY