Demonstration against racism after truck deeds

Thousands of Canadians gathered on Friday to protest racism and Islamophobia following a truck attack that the country's Prime Minister Justin Trudeau called a terrorist attack. 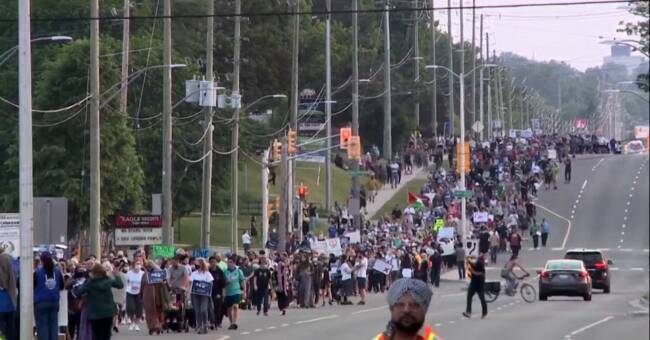 Around 15,000 people gathered late Friday for a rally against racism and Islamophobia in the city of London in the Canadian province of Ontario, according to CTV News.

The protest came just days after four Muslims were killed and a nine-year-old boy was seriously injured in a truck attack in the city.

Trudeau: "An act of terrorism"

Canadian Prime Minister Justin Trudeau has described the attack as a terrorist act motivated by hatred.

According to investigator Paul Waight, the act was "deliberate and intentional".

- We believe that the victims were chosen because they were Muslims, he said earlier this week.

A 20-year-old man was arrested after the attack on suspicion of murder and attempted murder and risks life in prison.

The act has been called a hate crime by the police.

City Mayor Ed Holder said during a news conference shortly after the act: "I will speak plainly, this was a massacre of Muslims."

The mayor states that the dead are a 74-year-old woman, a 46-year-old man, a 44-year-old woman and a 15-year-old girl - three generations of the same family who migrated from Pakistan.

The family's nine-year-old son was the only one who survived, he is now being cared for with critical injuries.

The family was walking on a sidewalk at half past eight in the evening local time when the truck drove up over the curb and into them.

In the demonstration train, which ended at the mosque where the family used to pray, signs with the livestock "Muslim Lives Matter" were seen.

Events around the country

In addition to London, demonstrations were held in Toronto, Montreal and Quebec, among other places.

The incident is the worst attack on Muslims in Canada since six people were shot dead outside a mosque in Quebec in 2017.

The four family members killed in the truck attack were buried on Saturday.