"Degraded to the lowest point": Putin said about the deterioration of relations between Russia and the United States in recent years

Relations between Russia and the United States have "degraded to the lowest point" in recent years, Vladimir Putin said. He also called former US President Donald Trump "an extraordinary, talented man", stressing that the incumbent head of the White House, Joe Biden, differs from his predecessor in a cardinal way, because he belongs to a different type of people and is a professional politician. The Russian leader noted that labeling has become customary for the American political establishment, and said he was not surprised at any attacks or accusations against him. Thus, Putin appreciated the words of Biden, who in one of the interviews answered positively the question whether he considers Putin a "killer". 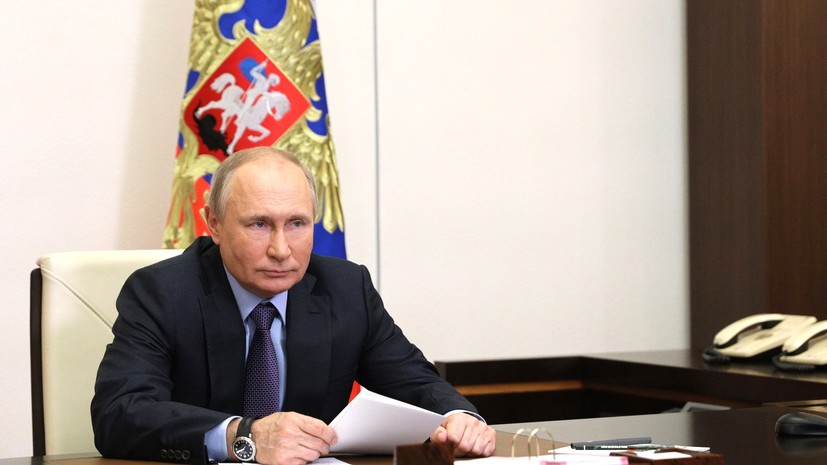 Relations between Moscow and Washington have reached their lowest level in recent years.

This was stated by Russian President Vladimir Putin in an interview with the American television channel NBC News.

“We have bilateral relations that have degraded to the lowest point in recent years,” Putin said.

The head of state also assessed the current US President Joe Biden and his predecessor Donald Trump, talking about their differences and calling the latter "an outstanding, talented person."

) would not have become the president of the United States.

He is a bright person, someone may like him or not.

This, of course, is not a product of the American establishment.

He has never been in big politics before ... President Biden is fundamentally different, because he is a professional, he has been in politics all his conscious life, he has been doing this for many, many years, ”Putin explained.

According to him, Biden and Trump are representatives of different types of people: "I really hope that yes, this has some advantages and some disadvantages, but there will be no impulsive actions from his (Biden -

When asked about his attitude to what Biden called him a "killer", Vladimir Putin noted that the use of such labels has become normal in American political culture, possibly under the influence of Hollywood, but for Russia such definitions do not look normal. In March, the head of the White House, in an interview with ABC News, answered in the affirmative whether he considered Putin a "killer" and said that the Russian leader would "pay" for alleged interference in the American elections. After that, Putin wished his colleague good health.

“During my work I am accustomed to attacks from different directions, for very many reasons and of different quality and severity, it does not surprise me.

We are with the people with whom we work, we argue in the international arena, we are not a bride and groom, we do not swear to each other in eternal love and friendship, we are partners and in some way we compete with each other, '' the president said.

- I have heard dozens of such accusations, especially during the period of our struggle against terrorism in the North Caucasus.

In doing so, I have always been guided by the interests of the Russian state and the Russian people. "

Vladimir Olenchenko, senior researcher at the Center for European Studies at the IMEMO RAS, in an interview with RT, stressed that Moscow was not to blame for the fact that Russian-American relations were in a very passive and critical state.

“The Americans have consistently worsened relations between Russia and the United States. The list of cases that led to stagnation in relations between Russia and the United States is quite long. The problem seems to be that the geopolitical situation in the world, strategic security, and the state of international relations in general depend on the state of these relations. On our part, many actions were taken to slow down US actions to worsen the situation. I consider myself to be an optimist and I hope that the meeting between Putin and Biden will be a turning point in the sense that the downward trend will be interrupted, ”he said.

The first personal meeting of Vladimir Putin and Joe Biden as presidents of Russia and the United States is scheduled for June 16.

Villa La Grange in Geneva will be a platform for negotiations.

It is expected that the heads of state will communicate both face-to-face and with the participation of members of delegations and assistants.

President's press secretary Dmitry Peskov told CNN that Putin is going to the summit with his American counterpart mainly because of poor bilateral relations and to "prevent further degradation of the dialogue."

On June 4, during a meeting with the chief editors of international agencies at the SPIEF, Putin noted that it was not Russia that “drove” relations between Moscow and Washington into their current state: “We did not do it.

We were not the first to take a single step in what was detrimental to Russian-American relations. "

The President also called on the United States to respect Russia's interests.

In turn, the press secretary of the White House Jen Psaki reported that Biden intends to be frank during the dialogue with his Russian counterpart and stressed that the upcoming meeting is not a reason for Washington to abandon further sanctions against Moscow.

At the same time, the head of the White House himself, speaking to the servicemen of the American base on the territory of Great Britain, said that he intends to make Putin understand that "America has returned."

He also said that the United States does not seek conflict, but aims at stable and predictable relations.

The 45th President of the United States, Donald Trump, noted an ironic statement on the topic of the upcoming summit, who reminded the public of the nickname “Sleepy Joe” coined for Biden during the 2020 election campaign.

"Good luck to Biden in interacting with Putin, do not fall asleep at the meeting and please convey my best wishes to him," the former head of the White House said in a statement.

We add that on the eve of the meeting, Putin and Biden were placed on the cover of Time magazine.

Switzerland is awaiting the arrival of the leaders of the two world powers, the country is glad to once again become a platform for a meeting at such a high level and to feel the trust of both sides.

This was stated in an interview with TASS by Swiss President Guy Parmelin.

According to him, preparations for the summit are being carried out in close contact with the Russian and American delegations.

“Switzerland has maintained good relations with both countries for many years and has pursued an open and transparent policy of dialogue. Switzerland is convinced that a constructive dialogue between the two great powers is necessary and very useful for solving interstate and global problems, ”he said.