G7, the summit kicks off: one billion doses of vaccines to poor countries 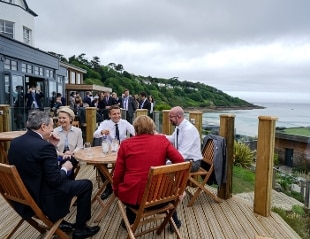 June 11, 2021The G7 summit opens today in Carbis Bay, Cornwall, the first in the last two years with leaders in attendance. And the first for the Italian premier Mario Draghi. The summit is expected to announce that the seven most industrialized countries in the world will donate one billion doses of vaccines to the poorest countries to help them fight the coronavirus.

Meanwhile, today the landlord, British Prime Minister Boris Johnson, announced that the UK will donate another 100 million doses, through the Covax alliance, within the next year, 5 million of which by the end of September. "At the G7 summit - said Johnson - I hope my colleagues will make similar commitments so that, together, we can vaccinate the world by the end of next year and rebuild better after the coronavirus". The US has already pledged to supply 500 million vaccines which are part of the total of one billion of the entire G7.

First summit in attendance for Draghi

Prime Minister Mario Draghi is in Cornwall. It is the first summit in attendance for the Italian premier, who landed at Newquay airport and then went to Carbis bay, the site of the summit. Before taking part in the work of the G7, Draghi had a coordination meeting with EU leaders.

In the afternoon he will then be "lead speaker" in the first session dedicated to the themes of economic recovery, entitled: "Building Back Better - Recovery for All".

The session will focus on three themes: national policies towards a greener and digital recovery; the role of the G7 in supporting the recovery of the global economy; policies aimed at advancing gender equality.

Then on the sidelines a bilateral meeting with British Prime Minister Boris Johnson is scheduled.

"Excellent coordination meeting with Chancellor Angela Merkel, Emmanuel Macron and Mario Draghi, together with the President of the European Council Main focus and common points of view on key G7 topics , in particular on Covid, climate and China ". The president of the European Commission, Ursula von der Leyen, who is involved in the G7 in Cornwall, writes in a tweet.

"Today the eyes of the world are on Cornwall as we meet for day 1 of @ G7. Global recovery, health, climate, development, security - we have 3 days to come together and bring about the change people expect. To get started, I will have a meeting with the EU G7 leader, to coordinate ", the president of the EU Commission writes in another tweet.

Macron, posted a photo of him smiling around a table with Prime Minister Mario Draghi, German Chancellor Angela Merkel, together with EU leaders, Charles Michele and Ursula von der Leyen. The leaders of the EU countries met before the start of the summit

for a coordination meeting. As a British Times reporter pointed out, it is "the table Boris Johnson will not attend" after Brexit.

The program for the next few days

Tomorrow's work will open with the second session on the main geostrategic trends at a global level, including the challenges of economic resilience, and a focus on the G7 partnership with developing countries.

The work will continue with the third session which will focus on some foreign and security policy issues, including Russia and Afghanistan.

The fourth session will therefore be held dedicated to health issues, in particular to the most immediate health challenges and the strengthening of global health systems.

Saturday will close with a dinner among the Leaders. The fifth and sixth working sessions will take place on Sunday morning, dedicated respectively to the theme of 'open societies and economies', the fight against climate change and the protection of nature, which will also be attended by the leaders of the World Bank, IMF, OECD and UN.

The issues on the table

The G7 meeting in Cornwall relaunches the

challenge of the West to China on the Coronavirus

, in relation to which a new WHO investigation will be requested. US President Biden and British Prime Minister Johnson are ready to announce 'a new Atlantic Charter' to strengthen the 'special relation' between the two countries.

The president of the EU Commission

and points to Russia and China as the main sources of concern. The issue is also at the center of the Italian agenda: Italian Prime Minister Mario Draghi meets Biden tomorrow.

Biden: "I'm looking forward to strengthening our commitment to multilateralism"

"It's the first official day of the G7 Summit here in the UK. I'm looking forward to strengthening our commitment to multilateralism and working with our allies and partners to build a fairer and more inclusive global economy ".

In the afternoon meeting with Queen Elizabeth

G7 leaders will meet Queen Elizabeth, in Cornwall today for the inaugural day of the summit. The meeting with the sovereign is scheduled for the afternoon, after the arrival of the Big Seven in Carbis Bay and the first meeting on "rebuilding better" after the pandemic. The queen will be accompanied by Prince Charles and his wife Camilla and by Prince William with his wife Kate.

Staff members of the Ped Olva hotel, one of the facilities hosting international delegations for the G7 in Cornwall, have tested positive for coronavirus. Members of the German delegation stay in the hotel, including security members of the German Chancellor Angela Merkel. Currently, Bloomberg writes, components that may have been exposed to the virus are in self-isolation and the Chancellor's visit and participation in the G7 have not changed, a German staff manager said. of today. Merkel, 66, received her first dose of the vaccine.