Yemeni military sources confirmed that there are preparations and arrangements to complete the liberation of the Yemeni governorate of Al-Jawf, with the continuation of the battles on the Khanjar front and east of Al-Hazm city, the capital of the governorate, while the Houthi militias sent reinforcements to Marib, which is witnessing battles on the western fronts, while a Houthi sniper was killed in 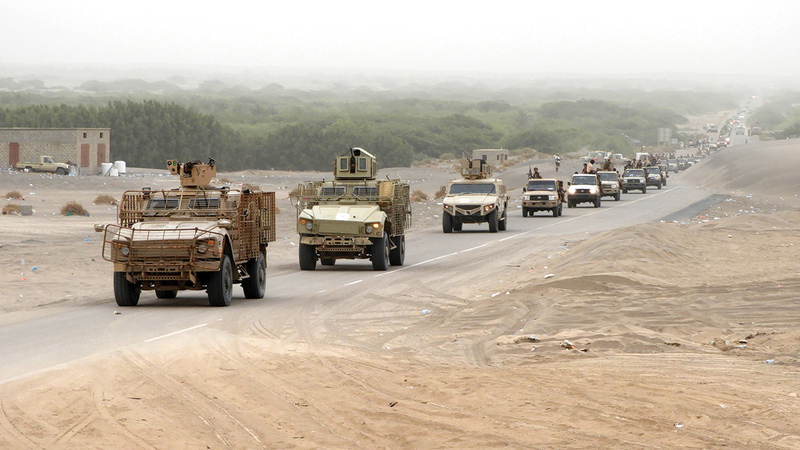 A Houthi sniper was killed in the West Coast

Military convoys of the Yemeni army during preparations for battles with militias.

Yemeni military sources confirmed the existence of preparations and arrangements to complete the liberation of the Yemeni governorate of Al-Jawf, with the continuation of the battles on the Khanjar front and east of Al-Hazm city, the capital of the governorate, while the Houthi militias sent reinforcements to Marib, which is witnessing battles on the western fronts, while a Houthi sniper was killed on the western coast by the forces. common.

In the details, sources in the Sixth Military Region in the Yemeni Al-Jawf Governorate confirmed the presence of combat preparations belonging to the region's forces, in conjunction with the arrival of military reinforcements coming from Marib to the governorate, with the aim of starting the battle to complete the liberation of the governorate, in conjunction with the process of attrition witnessed by the Houthi militia, 12 days ago. , in the vicinity of the Khanjar camp by the forces stationed in the area.

The sources expected that Al-Jawf would witness a large-scale attack by the army and tribes with the support of the coalition to liberate the city of Al-Hazm, the capital of the governorate. The city, al-Labanat camp will be the next target, from which military operations will be launched towards the western districts of the governorate, to reach the outskirts of the Houthi strongholds in Amran and Sanaa.

The Chief of Staff of the Yemeni Army, Commander of Joint Operations, Lieutenant-General Saghir bin Aziz, met with the Sixth Region Command, inspected the stationed fighters on the Al-Jawf fronts, and was briefed on the level of combat readiness and readiness to set out to liberate the remainder of Al-Jawf and reach Amran and Saada.

Bin Aziz praised the efforts of the Arab coalition to support it and support the army in the battle of Arabism and a common destiny. He also praised the sacrifices and the immortal epics written by the fighters of the army and tribes, as well as the great popular rally of the tribesmen of Al-Jawf and Marib, and all the people of Yemen around the armed forces in the battle to defend identity, constants and national gains.

For his part, the official spokesman for the Sixth Military Region, Captain Rabie Al-Qurashi, stressed the importance of unifying the ranks and popular and tribal efforts with the army, as well as holding the negligent and corrupt people accountable and continuing to arrange the fronts, until the liberation of the governorate is completed and the departure towards the capital, Sanaa, to restore it.

On the ground, violent battles continued between the Yemeni army forces and tribes on the one hand, and the Houthi militia on the other, on the front of the Khanjar camp in the Khub and Al Sha`af district, and on the fronts around the city of Al Hazm and east of Bir Al Maraziq.

Field sources confirmed the killing of the Houthi leader, Qassem Ali Salah Kadima, along with a number of his companions on the Khanjar front, the commander of the assault battalion, two days after the killing of the Houthi leader, the commander of the Khanjar Front, Brigadier General Abu Hashem Sharaf al-Din, and Colonel Abu Adel al-Hadi, during confrontations with army heroes in the front itself.

During the past two days, the army and tribes forces, backed by the Arab coalition, launched a massive attack on the Houthi positions on the Abrak Al-Ghadab and Al-Rahna fronts, west of Al-Khanjar camp, and were able to control several strategic doors, as well as foiled Houthi attacks towards the Al-Zohour Mountains and Al-Raqib Al-Abyad front. Al-Khanjar, in the wake of air raids targeting Houthi sites and mechanisms in different areas of the governorate, in which the group sustained heavy losses in equipment and lives.

The army and tribes forces had lured, at dawn yesterday, a group of Houthi militiamen, who were trying to advance towards locations in the Khanjar front, north of the governorate, according to the commander of the 161st Infantry Brigade, Brigadier General Muti` Al-Dumaini, noting that a group of 12 Houthis found themselves surrounded by All directions, after their refusal to surrender were dealt with.

On the other hand, field sources confirmed that the Houthis withdrew their heavy weapons, including "horses, tanks, bullets, artillery, and others" from the contact areas between Al-Jawf and Marib on the Al-Alam and Al-Nadod fronts towards the Al-Jadaan and Marib areas.

In Marib, field sources reported the arrival of huge Houthi crowds on the fronts of the province, coming from Sanaa, Hajjah, Al-Jawf, Saada and Amran, and that the militias are procrastinating and manipulating regarding the ceasefire, so that they can advance on the Marib fronts.

The sources confirmed that the militias sent the first batches of school students, who were assembled in the summer centers, to the Marib and Al-Jawf fronts to participate in their combat operations, which they are preparing for after the directives of their leader to resolve the battles in the two governorates, before talking about any approval of the international demands for a cease-fire, and action. to improve the humanitarian situation and return to the consultations table.

According to the sources, most of the Houthi crowds that were pushed, during the past two days, towards Al-Jawf and Marib are young school students, who were gathered in the summer centers, which is a new crime against childhood in Yemen, indicating the militias' intention to use these children. To determine the areas of mines and explosives that its members planted on the battlefronts during previous battles.

The al-Kassar, al-Mushajah, al-Jawf and Wadi Hailan fronts witnessed confrontations, which led to the death and injury of many militia members, including the commander of the Sarwah Front, the Houthi leader Ghaleb al-Assad, nicknamed Abu Khalil.

For its part, the coalition fighters launched a series of raids targeting militia reinforcements and combat equipment in Al-Jawf and Talat 100 Junction, and Hailan Junction, and 11 raids on Houthi sites and mechanisms in Sirwah, and others in Al-Mashjah and Al-Kasara.

In Hajjah, the forces of the Fifth Military District were able to thwart a Houthi attack on their positions in the Bani Hassan area in the Abs district, and another towards the areas separating Abs and Mastaba, inflicting heavy losses on them.

On the Bani Dabyan front, the tribes broke the second attack of the Houthis in less than 24 hours, in an attempt to advance towards Wadi Dhanna, in order to introduce combat reinforcements, including vehicles, including tanks and Katyusha launchers, to the Al-Sadd and Al-Zour front.

In Saada, the Yemeni army bombed separate Houthi sites in Razih, Shada, and Al-Raqq area in the Munabbih District, which led to the destruction of fortifications and the death and injury of Houthi elements.

In Sanaa, the leader of the Houthi militia, Colonel Ali Ahmed Al-Harouni (Abusam), who is considered one of the leaders of the spiritual group and is close to the militia leader, Abdul-Malik Al-Houthi, was buried.

In Hodeidah, a Houthi sniper was killed by the anti-sniper unit of the joint forces on the west coast, where the moment the sniper was spotted and killed while targeting the Thabet Brothers Industrial and Commercial Complex, inside the city of Hodeidah, was documented.

Meanwhile, the militias continued their combat escalation and violations of the UN armistice in all areas of contact on the western coast, and targeted civilian objects in Al-Durayhimi, Hays, and Al-Tahita, and others in the east of the city of Hodeidah, which prompted the joint forces to respond to and extinguish the sources of fire.

In Al-Dhalea, a civilian named Nasr Muhammad Al-Safi was wounded by a Houthi sniper, while he was receiving his family and children in the village of Al-Jarouf, north of the Maris area.

• Expectations that Al-Jawf will witness a massive attack by the army and tribes, with the support of the coalition for the liberation of Al-Hazm city.