Roland-Garros inaugurates the health pass: "The atmosphere will be nicer"

The health pass goes into effect Wednesday in France. The Roland-Garros tournament inaugurates the device with a luxury VRP: the Minister of Health, Olivier Véran. The spectators are delighted ... 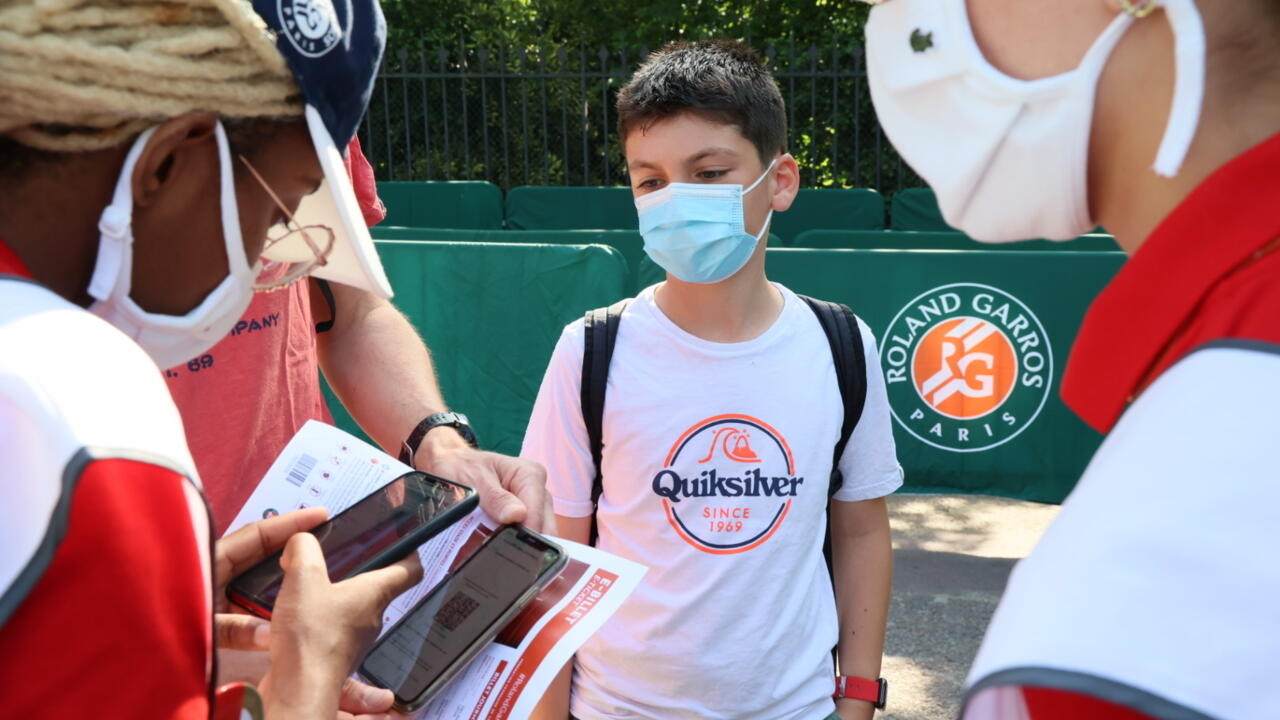 In the heart of a swarm of photographers and cameramen, Olivier Véran was officially, Wednesday, June 9, the first French to present his health pass at Roland-Garros.

The Minister of Health has chosen Porte d'Auteuil to promote the device which comes into force today and should mark a new step towards a return to normal in a post-pandemic world.

Flanked by Cédric O, Secretary of State for Digital, the Minister is there to show and show himself. Moreover, to allow photographers to have the right shot, he passes the control twice before entering the site for a quick visit of the Philippe-Chatrier court. Finally, at the entrance to the restaurant from the presidential stand, he poses with the QR code displayed on the wall to show the operation of the digital reminder book, another device entering the scene this Wednesday. By scanning this type of code with the TousAntiCovid application, customers in restaurants and other enclosed places can be notified if they have been in contact with positive cases.

The reopening of the dining rooms is accompanied by the return of the reminder notebooks, of which Olivier Véran presents the digital version at Roland-Garros.

"We have come to inaugurate this health pass which should allow thousands of spectators to enjoy Roland-Garros matches in complete safety," boasts Olivier Véran during a press briefing sent in a speech and two questions.

"This health pass should also allow the reopening of restaurants, sports halls and several places that the French miss."

>> To read also: "Reopening of the dining rooms: joy and worries on the menu"

Olivier Véran during the quick press point at Roland-Garros.

While the Minister of Health welcomes this new stage of deconfinement, the device comes into action at the entrance to the site.

Before ticket control, spectators are invited to present their QR code - paper or digital version - to the agents of the health brigade.

The employee who scans the QR code of the pass sees only the name of the person and an associated status, "green" (valid pass) or "red" (invalid).

According to the government's promise, he does not have access to detailed information about the person's immune status.

This also presents an identity document to complete the check.

The medical brigades carry out the checks of the pass.

For people respecting these rules, head to ticket control.

The others are confused to solve the problem: either by recovering the QR code of their test or vaccine thanks to Social Security, or by carrying out an antigen test in a center specially installed behind the statue of Rafael Nadal.

With this new step in easing restrictions and the introduction of the health pass, the Roland-Garros tournament can finally increase its tonnage.

Its site will be able to accommodate up to 13,146 spectators - 5,000 for the central court alone, almost as many as for the entire site since the start of the fortnight.

🎾 Game, set and pass! #RolandGarros can now accommodate more than 15,000 spectators on the various courts thanks to the implementation of the #PassSanitaire.

Near the Place des Mousquetaires, the first spectators of the day do not seem disturbed by these new controls nor by the prospect of having been the first French to have inaugurated the device: “Frankly, it was very simple. No problem. We presented the QR code and presto, let's go! "rejoices Ségolène Chollet, 46, who came with her mother to attend the quarter-finals on the Philippe-Chatrier court.

"It doesn't scare me that there will be more audiences. On the contrary, the atmosphere is going to be much nicer."

"I approve of this health pass. But even if we were to find ourselves between people who had been tested or vaccinated, I would have liked us to be able to remove the mask," regrets the seamstress, however.

Romain Savary, a teacher in his thirties, points out that the device requires good organization.

"I nevertheless think it is necessary. Necessary to make the French feel a little more responsible. The third wave has only just passed and I think we must unfortunately be prepared to live with the Covid a little longer. The French are complaining but we adapts and we move forward, "he adds with a smile behind the mask.

Unanimously, the spectators are delighted to finally be able to spend a long day in Roland-Garros. Long because, thanks to the curfew pushed back to 11 p.m., they will finally be able to populate the stands of court Philippe-Chatrier for the tenth and last night session of the year. Until now, these famous "night sessions" broadcast on Amazon Prime Video were fought in a central court sadly emptied of its audience. Tonight, the match will be brought forward to 8 p.m. in order to allow the lucky ones to stay until the end of the duel between Novak Djokovic and Matteo Berrettini for a place in the semi-finals. And perhaps thus convince of the interest of this nocturnal formula which did not have good press with the matches played behind closed doors.