The U.S. president’s week-long tour begins with a meeting with Boris Johnson and ends with a summit with Vladimir Putin. 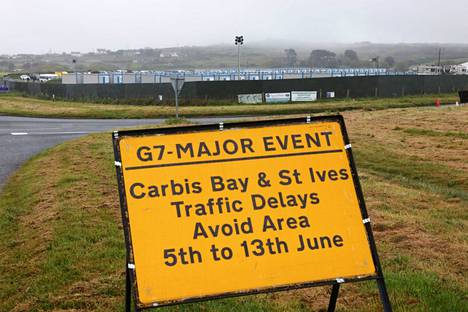 The United States moved into post-President Donald Trump time in January, and now it’s Europe’s turn when President Joe Biden arrives on Wednesday for the first foreign trip of his term to the old continent.

Biden is facing a super week that includes meetings of the British leadership, the G7 summit in Britain, the NATO summit and an EU leadership meeting in Brussels.

At the same time, this is the first face-to-face encounter with the world’s top leaders since the start of the corona pandemic.

Finally, the trip will be perhaps the most anticipated moment when Biden will meet Russia’s Vladimir Putin at the Swiss summit next Wednesday.

The G7 summit of leading industrialized countries will close Cornwall over the weekend.

It is in this respect that Trump’s shadow closely follows Biden’s positions in the estimates of the visit.

- Trump's shock to the EU over the years should not be underestimated.

The shadow of his return still exists, and the EU would once again be left alone in the cold.

So the EU is wary of U.S. demands, comments Rosa Balfour, an expert at the Carnegie Research Institute interviewed by the New York Times.

Officially, the visit will glow how the United States and Europe will go hand in hand again.

- America is back, Charles Michel, President of the European Council, the EU's highest political body, told reporters in Brussels on Monday.

This is a slogan launched by Biden himself.

- It means that we have a very strong partner in the multilateral approach again - it is a big change compared to the Trump administration, Michel explained.

Biden arrives in Britain with his wife Jill Biden.

This will return home after a meeting with Queen Elizabeth next Sunday as the president continues his trip to Brussels.

Biden outlined the guidelines for his trip in an opinion paper published in the Washington Post over the weekend that promised speeches pleasing European hosts.

Biden stressed the alliance of the world’s democracies against new threats, promising climate and pandemic cooperation and U.S. leadership in them.

NATO allies and others were pleased with the reassurance that Biden reaffirmed the U.S. commitment to Article 5 of the Military Alliance, a common duty to defend.

- The democratic values ​​we share are the basis of the most successful alliance in world history, Biden wrote.

However, the assurances in themselves tell us that, in Trump's footsteps, Biden has a lot of work to do to normalize relations.

The political situation in the United States has continued to escalate enormously, and Biden’s domestic political agenda has froze in Congress since a busy start.

As early as next year, Republican opponents can hit him with more sticks in his stroller by succeeding in the congressional election.

The rise of Trump, or one of his imitators, to power in the 2024 presidential election is entirely possible.

Biden is leaving for Europe at a time when his domestic policy projects are in trouble due to Republican opposition.

Awareness of this also affects Biden's ability to engage allies in supporting its own foreign policy, which is increasingly directed against China, for example.

- The question that Biden and members of his team have already heard from other countries they have tried to persuade to do this or that is this: how can we trust your word?

Look at what happened to Iran’s nuclear deal in the past: the next president tore it to pieces, commented former British U.S. Ambassador Peter Westmacott to the Guardian.

- What if there is a Trump or a Trump clone in the White House again in four years?

What’s the point of making contracts with you if it’s not even worth the contract paper?

I think Biden is aware of the damage done to the U.S. reputation as an ally.

Ex-President Donald Trump, who is planning a return, spoke at a Conservative meeting in Florida in February.

Opinion polls also tell the public about the collapse experienced by the U.S. reputation.

According to a recent study commissioned by the German Marshall Fund, only a nip of half of Germans considered the United States a reliable partner.

Leon Panetta, a former U.S. Secretary of Defense and CIA leader representing the Democrats, interviewed by the Guardian, estimates that Biden has work to do to restore the United States as world leader in the eyes of others.

- He can do it, but he has to work with the allies at a time when they are wondering whether this is just a temporary phase in US foreign policy or something more permanent.

Biden will first meet Johnson on Thursday and on Monday he will meet at Stoltenberg’s NATO meeting in Brussels.

Thursday’s visit to Prime Minister Boris Johnson reminds the British of Biden’s assessment in 2019 that Johnson is Trump’s “physical and mental clone”.

According to Westmacott, Biden was acidified by Johnson’s offensive assessments of Biden’s Democratic colleagues.

Biden is also well aware that Johnson would have preferred Trump to win the last election, so Westmacott says there is work to be done in his relationship with the old ally.

At the Putin summit, Biden, for his part, must strongly emphasize that Trump's reckless attitude to the defeat of the Russian political opposition and the election disturbance is over.

Biden was then vice president and Putin as prime minister of Russia.

Scholars are also of the opinion that the United States has already changed permanently and this is reflected in Biden’s journey to Europe.

No services and support are promised from Biden without consideration, and as noted, U.S. attention has shifted against China’s growing influence.

There has also been a stir in Europe over the fact that Biden has still not had time to appoint new EU and NATO ambassadors.

This has been seen to indicate that the continent is not first in order of importance.

- The hopeful, optimistic point of view is that Biden will start new relations, show confidence in Brussels and NATO, say the right words and launch important strategic processes.

But he also wants to see that it pays off for the United States and that Europe produces results.

This is not absolute love, but an activity in the common interest of friends, says Jana Puglieri, director of the Berlin branch of the European Council on Foreign Relations incubator, to the New York Times.

However, French defense expert Francois Heisbourg called on Europeans to focus on the positive aspects.

- The United States is back, Biden is back, you don't have to be cynical.

Biden has strong insights and he implements them with determination.

International relations are not his number one priority, but the basic premise is that “being friends again and restoring courtesy and manners with allies”.

Meeting with Queen Elizabeth of Britain at Windsor Castle with Mrs. Jill Biden.

Summit with Vladimir Putin in Switzerland.