With fifteen months until the election, the last party leader debate of the Riksdag year was more than usual marked by the government issue. The contours of a new game plan with two blocks against each other are becoming increasingly clear, but also the division within the government alternatives. This became particularly noticeable in the issue of market rents - an issue that cuts straight through Stefan Löfven's government documents. 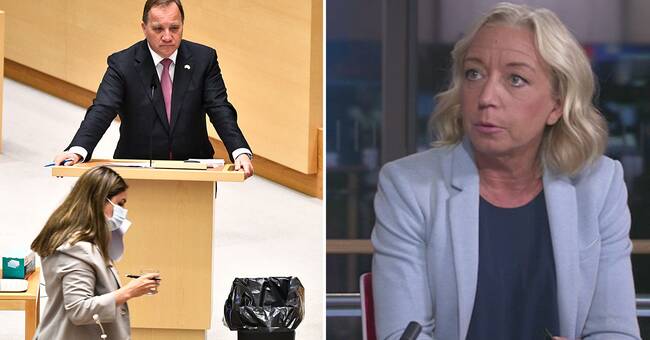 Today's party leader debate was the first in the Riksdag since the Liberals' announcement in the government issue that they want to be part of a bourgeois government, even if it requires cooperation with the Sweden Democrats. The announcement has not given any dividend in public opinion for L, but it has meant that we can face a new situation in Swedish politics. Two laws against each other where one is bound together by the will to change government while the other is united in the continued effort to keep the Sweden Democrats away from direct influence over government policy.

A new game plan that gave both nerve and a sense of election movement to the debate.

A feeling that was reinforced by the fact that the pandemic played such a hidden role.

It mostly served as a fund for the questions the party leaders want to put at the front of the shop window before next year's election.

Ulf Kristersson (M) did not even mention the pandemic in his introductory speech, which may be a signal that it will not be such a big election issue after all.

Can be a classic left-right conflict

On the other hand, unemployment will by all accounts be.

And here are the conditions for a renaissance of the classic left-right conflict.

It became clear in the duels between Ulf Kristersson (M) and Stefan Löfven (S) where the M leader wanted to make a big deal of the proposals for tax increases contained in the Social Democrats' recent equality report while Löfven accused Kristersson of only having tax cuts as a solution to unemployment .

The messages are recognizable.

Welfare against tax cuts if S is allowed to set the agenda.

Contribution to work if M is allowed to decide.

Regardless of who wins that tug-of-war, it is clear that both the Prime Minister and the opposition leader are more comfortable with that conflict than with the cultural value struggle that has so far characterized Swedish politics.

A clearer left-right conflict also goes home among the own.

But it is also in economic policy that their respective government alternatives are most fragmented.

In today's debate, it became particularly noticeable when Annie Lööf (C) and Nooshi Dadgostar (V) smoked together about market rents.

A battle that made Annie Lööf exclaim:

- Stop gasping from the left edge.

Hard tones that illustrate that Stefan Löfven is facing a challenging rep trick if he is to succeed in sewing together the government base that will probably be required for a new S-led government to get its budget through.

But the issue of market rents is not just an example of the factual political gap between C and V. It also hurts in substance for Stefan Löfven.

In particular, the attacks from the V-leader that free rent in new production means a system change where the collective bargaining model is put out of play.

It is a message that of course goes home to the S-voters who are dissatisfied with the right-wing in the January agreement.

In the right-wing half of the plan, there is also a split in economic policy, where SD wants to push for higher unemployment benefits, higher health insurance and higher pensions through a higher pension contribution.

And these are demands that go completely against the line of work that Ulf Kristersson wants to go to the polls on.

But that conflict was overshadowed in today's debate.