The brother of the drowned Dibba Al-Fujairah young man, Sultan Saeed Al-Yamahi, 16, whose body was found yesterday evening in the sea of ​​Dibba Al-Fujairah port, and recovered by the Fujairah Police, in cooperation with the Coast Guard, after hours of continuous research, revealed the details of the drowning incident to «Emirates». Today.” 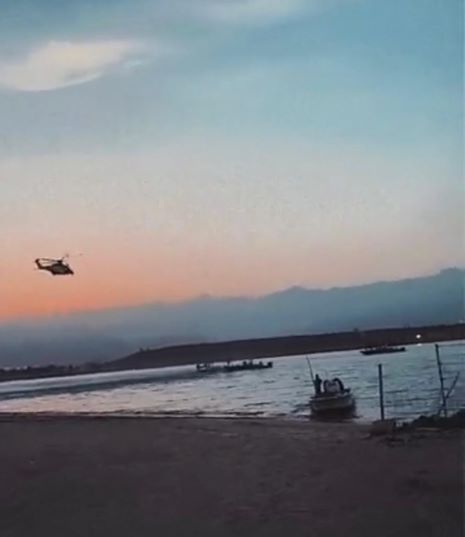 The brother of the drowned Dibba Al-Fujairah young man, Sultan Saeed Al-Yamahi, 16, whose body was found yesterday evening in the sea of ​​Dibba Al-Fujairah port, and recovered by the Fujairah Police, in cooperation with the Coast Guard, after hours of continuous research, revealed the details of the drowning incident to «Emirates». Today".

Ibrahim Saeed Mohammed Al Yamahi said that "the sister of the drowned used to swim since his childhood in the sea of ​​the city of Dibba Al-Fujairah, but he is not proficient in it in a professional manner that allows him to enter the deep areas of the sea," noting that he was accompanied by his cousin, but the sea currents due to deep drilling. In the area where they were swimming, the drowned man was swept away in a sudden way, and his cousin was unable to help him.

Al-Yamahi pointed out that he decided with his sister and cousin to swim in the sea of ​​Dibba, Fujairah, but he was unable to catch up with them due to his preoccupation with other matters. He continued: “My brother and my cousin (18 years) went to practice the sport of swimming that we used to practice during the summer, but they They chose the sea of ​​Dibba Al-Fujairah port in the Sambraid area, next to the breakwater, and they were not aware that the other side of the sea is where a project is being established, and it contains deep sea pits.”

He noted that the drowned and his cousin thought that the area was as it was before the start of the project, where the nature of the sea was gradual, and he could walk in it for a distance of 100 meters without the need to swim, adding that his cousin is good at swimming, and was able to save himself, but his brother He was surprised by the deep pits, and kept trying to jump out of them, but was swept away by the sea currents.

He continued: "The beach was crowded at the moments of Sultan's drowning, but no one was able to save him, as the currents were suddenly pulling him and swept him to the depths in moments, praising the participation of the people of the area, especially the speed of the behavior of a young woman who was at the scene of the accident, she asked for help from people. On the beach as soon as she saw my brother drowning, I also informed the responsible authorities to help them.”

Al-Yamahi added: “The hours of waiting and searching are among the most difficult moments that we have lived through. It was mixed with a feeling of fear, anxiety and helplessness, and with the passage of more than two hours since the search for him, we realized that the chance of his survival had become very weak, until his body was found and retrieved from the sea water, and buried. At the cemetery and the defect of henna yesterday evening.”

He pointed out that his brother had many dreams, as he was in the eleventh grade, and he was overwhelmed by feelings of happiness as the school year ended and the summer vacation began.

It is noteworthy that Fujairah Police, in cooperation with the Coast Guard, recovered the body of a drowned 16-year-old drowned in Dibba Al-Fujairah Port, after several hours of continuous searching yesterday evening, and also rescued another (18-year-old) who was with him.

The operations room of the General Command of the Fujairah Police received, at exactly five o'clock in the afternoon, a report that two young men had drowned in the Dibba Al-Fujairah port area. Immediately, the police, civil defense, coast guard and national ambulance teams moved to the site, where it was found that the two young citizens of the country had gone swimming in The sea in the Dibba Al-Fujairah port area, but they drowned, and the body of one of them was recovered, while the other was transferred to Dibba Al-Fujairah Hospital for treatment and is in a stable condition.