Who is the bearded figure standing next to Jukka Jalonen? The unknown golden finger plays a giant role behind the scenes of the Lions

Goalkeeper coach Kari Lehtonen is a creditor of both Jukka Jalonen and Leijonie's goalkeepers. In 2019, Kevin Lankinen shone as the Wall of the Lions. Lankinen's slump on the ice surface after he reset the Russian NHL stars in the World Cup semi-final has been stuck on the retinas of the puck fans. The tournament ended with a great world championship. Now Leijon has a new goalkeeping star, 30-year-old KHL goalkeeper Jussi Olkinuora. He reset the Czech stars in the semi-finals. In the bac 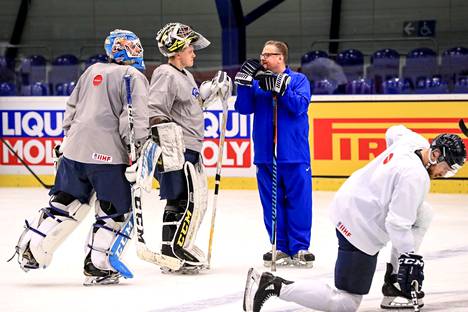 In 2019, Kevin Lankinen shone as the Wall of the Lions.

Lankinen's slump on the ice surface after he reset the Russian NHL stars in the World Cup semi-final has been stuck on the retinas of the puck fans.

The tournament ended with a great world championship.

He reset the Czech stars in the semi-finals.

In the background of both goalkeepers is the same man: Lions goalkeeper coach Kari Lehtonen, 54.

Read more: Lions star Jussi Olkinuora took out a loan of almost 40,000 euros at a young age and left for the USA - in a couple of years everything changed

During his career, the experienced Lehtonen has worked with many top winemakers, the best of whom are currently playing in the NHL.

For example, Juuse Saros, who played a great NHL season, has learned lessons in Lehtonen's coaching at HPK.

Lehtonen was part of Jalonen's coaching team when Young Lions won World Championship gold at home in 2016. He has been a member of the A national team's coaching team since Jalonen took the main responsibility in the 2018–2019 season.

- I describe my coaching collaboration with Jukka in one word, and it is excellent.

I have no complaints, and certainly not Jukka, because I have been allowed to work in this role, Lehtonen says.

Of course, a great deal of credit goes to Lehtonen for the success of the lion guards, even though for most of the season the goalkeepers work on their own club teams.

On the World Cup ice, the Lions goalkeepers seem to be stretching at their best, even in a tough pressure cooker.

What is the secret to the recipe for success?

- It is a wrong premise that it is only my credit, Lehtonen begins.

- In my coaching career, reading the game has always been important to me.

I try to talk to the goalkeepers so much that they are game-ready for sure.

For example, force attacks come into play: how the kit plays it, and how the goalkeeper in turn plays.

Lehtonen summarizes his main role in the short tournament as follows:

- I try to keep the game ideology as simple as possible so that the solutions always come from the backbone with the goalkeepers.

In Leijon, Lehtonen's role is not limited to coaching goalkeepers.

He is heavily involved in building the Lions Underpower Puzzle.

I’ll give you tips that a couple have gone through.

I look at superiority from the goalkeeper’s perspective as to how we can best, within the rules, disrupt an opponent’s goalkeeper.

The job of a goalkeeper coach also includes mental coaching.

- I'm an individual coach within the team.

Many times I get in the role of a listener when one starts to open the chest.

If something is busy, we go through it together.

In the most recent World Cup, the Lions have not been assisted by a goalkeeper from the top of the NHL, but that hasn’t hampered the going.

- So-called “next goalkeepers” have done the job more than in style. You must be proud and happy about it. We need such stories a'la Kevin Lankinen and Jussi Olkinuora. Pekka Rinteet and Tuukka Raskit have always risen somewhere.