Experts on the G7 decision: "Historical"

The countries in the superpower group G7 have agreed to stand behind a global minimum tax of 15 percent for companies. - It is historic, says Robert Bergqvist, chief economist at SEB. 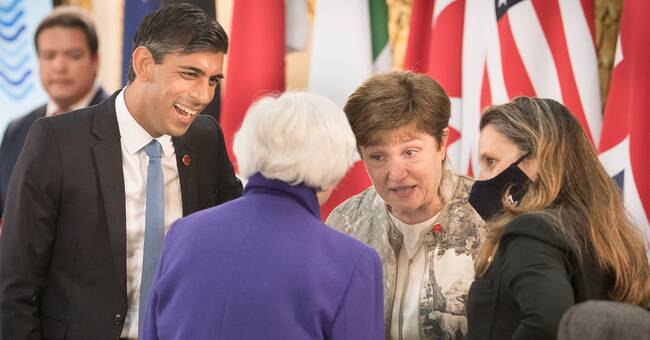 Although the major powers in the G7 agree on a global minimum tax, more steps remain before it can become a reality.

For that, greater support is needed, according to Robert Bergqvist, chief economist at SEB.

If you get the G20, it is very comprehensive.

They represent a much larger part of the world economy, which also includes emerging economies such as China and India and a number of such countries, says Robert Bergqvist.

"Great to agree on in this area"

The G20 finance ministers and central bank governors will meet in Venice in July.

But today's agreement is an important signal.

The G7 includes the United States, the United Kingdom, Germany, Japan, Italy, Canada and France, as well as a representative of the EU.

It should make it easier for the G20 to agree, says Bergqvist.

What is historic about the agreement is, according to Robert Bergqvist, that the agreement concerns areas that it is usually up to each individual country's governments to decide on.

Agreeing in this area is great, says Robert Bergqvist.

- They have come a long way along the way considering that they are so central in the world economy and should make it easier for the G20 to agree, says Bergqvist.

The OECD has also previously said that it is aiming for an agreement on the issue this summer.

Sweden's Minister of Finance Magdalena Andersson (S) has said that she is positive to the proposal.

Claes Hammarstedt, tax expert at the Confederation of Swedish Enterprise, believes that the decision from G7 is not surprising.

- A great deal of work is underway within the OECD and G20 countries to produce a package with a digital tax and a minimum tax.

That work is progressing and an agreement is expected to be reached.

The Confederation of Swedish Enterprise is actually against a global minimum level because this can be seen as an encroachment on tax sovereignty.

- Large countries with large markets have a natural appeal.

Smaller countries must be able to compete in other ways.

If you can do it with the tax rate, we believe that you should be able to do it, says Claes Hammarstedt.

What does a global minimum tax mean for companies?