Today, Friday, Egypt sent a convoy of engineering equipment and technical staff to the Gaza Strip, to prepare for reconstruction operations after the recent Israeli war. 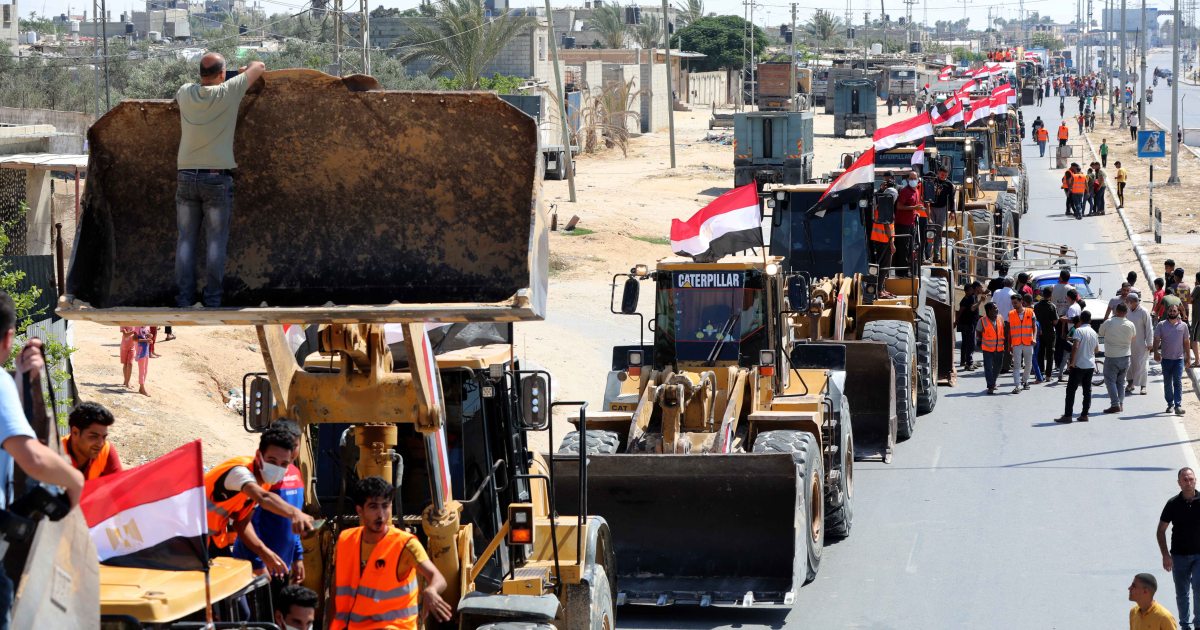 Today, Friday, Egypt sent a convoy of engineering equipment and technical staff to the Gaza Strip, to prepare for reconstruction operations after the recent Israeli war.

The official Egyptian television broadcast scenes of bulldozers, cranes and trucks crossing from the Egyptian side to the Gaza Strip through the Rafah crossing, with Egyptian flags on them.

An official statement said that "on the instructions of President Abdel-Fattah El-Sisi, Egyptian engineering equipment and technical staff crossed the Rafah border today into the Gaza Strip, to contribute to removing the rubble and the rubble of demolished houses and towers, in the context of relieving the citizens of the Strip and quickly returning life to normal."

The statement added that this convoy will "pave the way for the start of the reconstruction process."

Reuters quoted a Palestinian official in the administration of the crossings as saying that 50 trucks crossed from Egypt into the Gaza Strip.

#Watch: The Egyptian mechanisms that will start removing the rubble begin to enter the Rafah crossing.

For his part, Hazem Qassem, spokesman for the Islamic Resistance Movement (Hamas), expressed the movement's appreciation for Egypt's contributions to the reconstruction efforts.

The situation in Palestine has erupted since last April as a result of Israeli attacks in occupied Jerusalem, and the escalation spread to the West Bank and inside the Green Line, then the confrontation took place between the occupation army and the resistance factions in the Gaza Strip for 11 days, and ended with a ceasefire at dawn on May 21 last May.

The Israeli aggression on the West Bank and Gaza Strip resulted in the death of 290 Palestinians, including 69 children, 40 women and 17 elderly people, and the injury of more than 8,900 others, while 13 Israelis were killed.

Egypt played a major role in mediating a ceasefire, and announced on May 18 that it would provide $500 million for the reconstruction of the Gaza Strip, and made it clear that the contribution would be made through Egyptian companies.

A ministry official stated that the cost of rebuilding those units is $150 million.