World Cup verdict: The young man of the lions drifted into a disgusting place - for the sake of Luko, he should have thought more carefully about his wedding patterns

The World Cup verdict horrifies the fate of Kim Nousiainen and marvels at Pavol Skalicky’s decision. The jury of Ilta-Sanomat will focus on the burning topics of the World Cup Day. Sami Hoffrén Star of the Day: The Lions goalkeeper situation is excellent as the tournament turns to last week. In Sunday's match, it was Harri Säteri's turn to shine. The experienced 31-year-old goalkeeper kept his team upright in difficult moments, especially in the second and third rounds. In three matches, Säteri 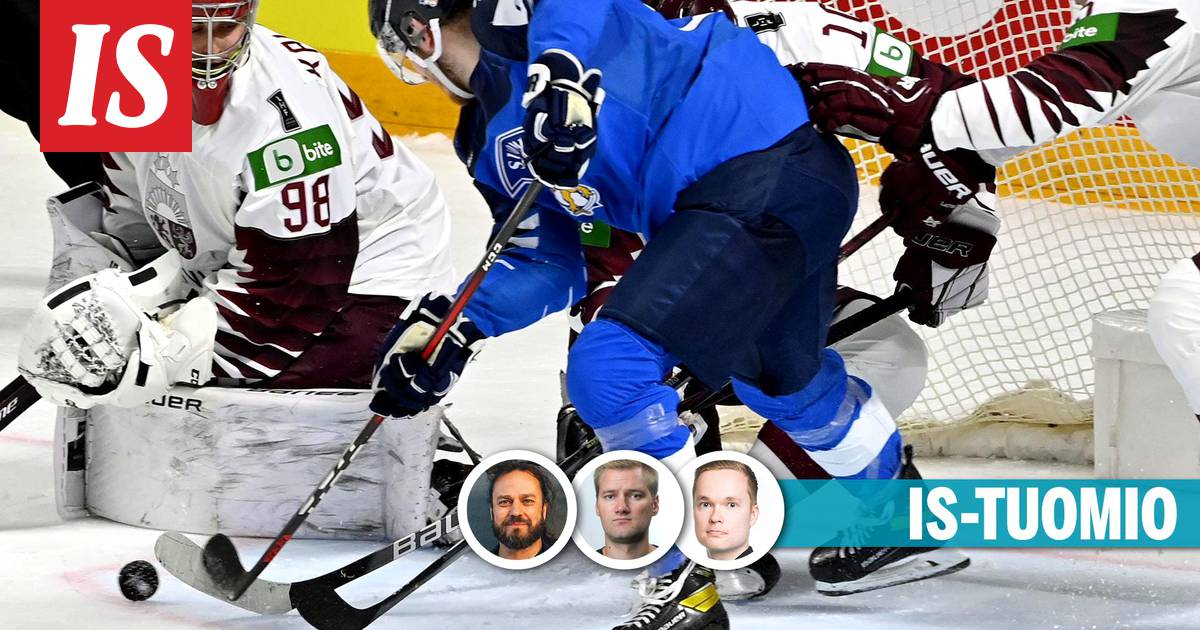 The jury of Ilta-Sanomat will focus on the burning topics of the World Cup Day.

Star of the Day: The Lions goalkeeper situation is excellent as the tournament turns to last week.

In Sunday's match, it was Harri Säteri's turn to shine.

The experienced 31-year-old goalkeeper kept his team upright in difficult moments, especially in the second and third rounds.

In three matches, Säteri has fought the puck with 95.52 percent confidence.

Topic of the day: The Lions is the only team in the tournament that has not lost in regular time.

This speaks loudly about the team’s performance and discipline.

Against Latvia, Finland was far from its best, but once again in the decision moments the team defended regularly and hit the necessary goals.

Mocha of the day: Did evil on behalf of Kim Nousiainen.

In the second set, KalPan's 20-year-old defender received a heavy bomb in the middle area, as a result of which Nousiainen flew to the Lions' exchange pit face first.

Fate was cruelly possible, as the floor of the pitching team's changing bench is the most unhygienic landing place.

Style of the day: Some make ugly goals, some make spectacular goals.

Anton Lundell knows the latter side.

Only the shot and solution arsenal of the 19-year-old top promise is in a class of its own in Leo.

Lundell’s skillful winning goal in the final seconds of overtime was a cold-cool performance.

The same can be said about Olli Määtä's introduction.

Surprise of the day: The Slovak team had godparents.

Pavol Skalicky, who won the locked championship this spring, will be left out of the World Cup.

The reason is confusing, as Skalicky is leaving the game in the middle because of his own wedding.

Love is a great thing, but should this pattern and timing have been worth thinking a little more thoughtful now.

Star of the Day: The player who solves the fight in extra time is without a doubt the star.

In addition to Lundell, Iiro Pakarinen should also be mentioned again.

The man was awarded the best player in Finland with a handsome watch.

The clock could also have been given to goalkeeper Harri Säter.

And of course also for Lundell, even though he has already won one Tissot in the tournament.

Topic of the day: Latvia, the host country that has started the Games well, is having great difficulty getting into the follow-up games and thus finally performing for the home audience to be allowed inside the hall.

Martins Dzierkals scored two goals against Finland and became the country's national hero for a while.

The hero did not turn into a villain, even though the goals did not bring Latvia to victory.

Mocha of the day: At the end of the second set, Finland had a very good turn in front of the Latvian goal.

Niko Ojamäki would have had at least a thousand bucks to take Finland to the lead.

It seemed flimsy and mocha, but the acknowledgment came quickly, when Pakarinen made Finland's lead just a moment later.

Style of the day: Saku Mäenalanen was on the move with a good leg and finished Finland's opening goal with his left leg.

In Core's studio, Lasse Kukkonen was sure that there could be no planned guidance in the goal, as Mäenalase's skills are not mentioned in football.

Surprise of the day: Pavol Skalicky of Slovakia was told to leave the race in the middle as the man is getting married next weekend.

Slovakia has played a good tournament and it is not impossible for the country to play in the semi-finals over the weekend.

Is it possible to always watch sports on TV instead of a whimsical chair play in the wedding party program?

Star: Now is the high time to star Saku Mäenalanen.

Wet seasons in the Jokers, but the national team passes.

Could a career take off after an excellent World Cup tournament?

The goal was created by a lucky but high-quality attack.

The topic of the day: Jukka Jalonen's assembly tricks.

Many expected the Lions to continue with much the same lineup as against Germany.

However, this did not happen, and Jalonen spun the chain roulette at this point.

Tero Lehterä and Lasse Kukkonen, who look at the matter from the players' point of view, marveled at the solution in C More's studio.

Mocha of the day: The judge whistled in an unreasonable cold for Rodrigo Abols of Latvia for diving.

Oliwer Kaski, who had been hooked on the ice box from the same situation, was to blame for the fall of the Latvian player.

From the lips of Latvian head coach Bob Hartley was able to read words that do not fit the children’s ears.

Style of the day: The Latvian boar rudely took the young Lion Kim Nousiainen to the bench.

Nousiainen first had to patrol the floor of the swap bench up close and then blow for a while.

However, Nousiainen was later picked up on TV pictures, when the Savo boy waved a wide smile.

Surprise of the day: Marko Anttila's overtime in overtime.

The Latvian defender slid into the corner of his stomach as “Mörkö” threw an orthodox top mine at the counter.

However, the finishing was incomplete.

Mörkö could have hit in many times already in this tournament, but the gunpowder is wet unlike in the solving games a couple of years ago.