Reinforce its forces in the green line.. The occupation suppresses participants in a Palestinian marathon in Jerusalem, injuring dozens in the West Bank

The Israeli occupation forces suppressed participants in a Palestinian marathon in occupied Jerusalem in support of Jerusalemite families threatened with displacement, and injured dozens of Palestinians during anti-settlement protests in the West Bank. 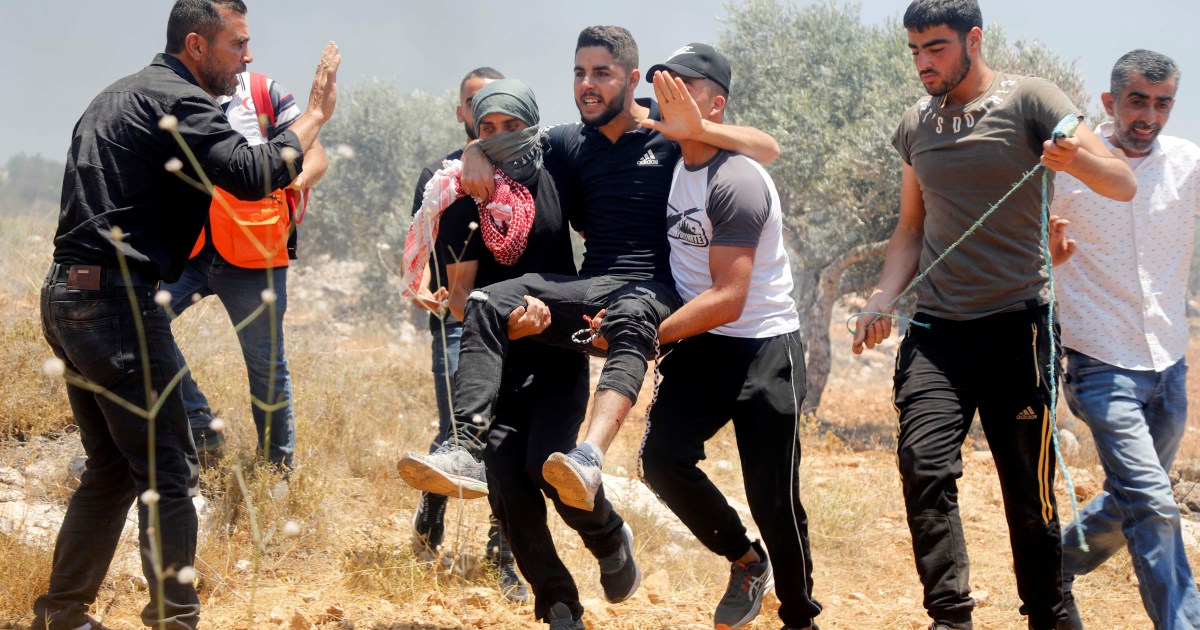 Today, Friday, the Israeli occupation forces suppressed participants in a Palestinian marathon in occupied Jerusalem in support of families threatened with displacement, and injured dozens of Palestinians during anti-settlement protests in the West Bank, while the Israeli government approved a plan to enhance security deployment within the Green Line.

Al-Jazeera correspondent Guevara Al-Budairi said that the occupation forces assaulted the marathon participants in the Silwan neighborhood of Jerusalem and inflicted a number of injuries among them.

Video clips published by Palestinian platforms documented the moments of the Israeli occupation forces storming the sit-in tent in the Batn al-Hawa neighborhood, the neighborhood of Silwan, and attacking those in it with sound and gas bombs.

Heavily armed forces of the occupation police stormed the Batn al-Hawa neighborhood tent in Silwan and fired stun grenades, gas and rubber bullets at Jerusalemites who were in the place pic.twitter.com/FkkZTJIas9

The first marathon in Jerusalem

The marathon, the first of its kind in occupied Jerusalem, was launched from the Sheikh Jarrah neighborhood, and the number 7850, which symbolizes the number of Jerusalem families threatened with displacement by the occupation authorities, was written on the shirts of the participants.

Al-Jazeera correspondent reported that hundreds of Palestinians from Jerusalem and from within the Green Line participated in the marathon, which started from the Sheikh Jarrah neighborhood towards the Silwan neighborhood, passing through the Mughrabi Gate and Bab al-Asbat, in rejection of the Israeli policies of displacement and settlement, and clinging to the land and the homeland.

The correspondent indicated that the participants in the marathon are of all ages, noting that this event was part of a youth movement from the high school and university generations.

An Israeli plane throws tear gas canisters at Palestinian demonstrators in the town of Beita, south of Nablus.

Demonstrations and injuries in the West Bank

In the West Bank, dozens of Palestinians were injured - including 4 by the Israeli occupation army's bullets - in the town of Beita, south of Nablus.

Al-Jazeera correspondent in Nablus, Samir Abu Shamala, said that "the occupation forces fired bullets and tear gas canisters at Palestinian youths who went out to demonstrate in protest against the establishment of a new settlement outpost at the top of Jabal Sabih."

He added that the town of Rafat (north of Jerusalem), in turn, witnessed confrontations between the occupation forces and Palestinian youths.

Hundreds of Palestinians demonstrated today at Mount Al-Alam in the town of Ni'lin, west of Ramallah, and in the town of Rafat, east of Jerusalem, in protest against the confiscation of Palestinian lands for settlement expansion and the measures taken by the occupation authorities.

This coincided with the departure of the residents of the villages of Beit Dajan in Nablus and Kafr Qaddoum, Qalqilya district, in weekly marches to prevent settlers' attempts to implement settlement construction projects.

In occupied Jerusalem, Israeli extremist right-wing organizations called on the Israelis to participate in the "Flags March" next Thursday, passing through Bab al-Amud, one of the gates of the Old City of Jerusalem, and through the streets of the town, to reach the Al-Buraq Wall, which the Israelis call "the Western Wall."

The march - in which many Israeli flags are raised - was scheduled to be organized last month to coincide with the anniversary (according to the Hebrew calendar) of the occupation of East Jerusalem in 1967;

But it was postponed following the Israeli war on Gaza and in light of the severe tension that prevailed in East Jerusalem and other cities.

The newspaper "Israel Today" - quoting the organizers of the march - said that they "will demand the unification of Jerusalem forever, and they will return to walking in the streets of Jerusalem," adding, "We raise Israeli flags, sing and dance on the land of Zion and Jerusalem."

Reinforcements inside the Palestinian territories

On the other hand, the Israeli government approved today a plan to strengthen the police forces in the Palestinian cities described as mixed, such as Lod and Acre, which last month witnessed protests and clashes against the backdrop of racist attacks and the Israeli aggression on Gaza.

The Israeli Broadcasting Corporation said that the government approved the emergency security plan put forward by Internal Security Minister Amir Ohana in the wake of recent clashes between Arab and Jewish residents.

The authority added that the most important part of the plan, which costs about 100 million shekels (about $30 million), is to strengthen the presence of the police and border guards in the mixed cities.

Yesterday, Thursday, the Israeli police said that it had arrested 2,142 people during the arrest campaign it carried out inside the Palestinian territories after protests against the Israeli attacks in Jerusalem and the war on Gaza.