Environmental interests: how the situation with the revocation of the Baltic Pipe construction permit is developing

The Polish Foreign Ministry reacted to Denmark's withdrawal of permission to lay the Baltic Pipe gas pipeline, noting that environmental issues may not be the only reason for such a decision. Earlier, Copenhagen canceled the previously issued permit for the construction of the highway due to possible damage to the environment in the construction zone. At the same time, Warsaw expressed its readiness to clarify the situation around the gas pipeline as soon as possible, the construction of which Poland began in May 2020. The Federation Council suggested that the issue of confronting Nord Stream 2 for Warsaw would lose relevance against the background of the need to complete its own gas project. 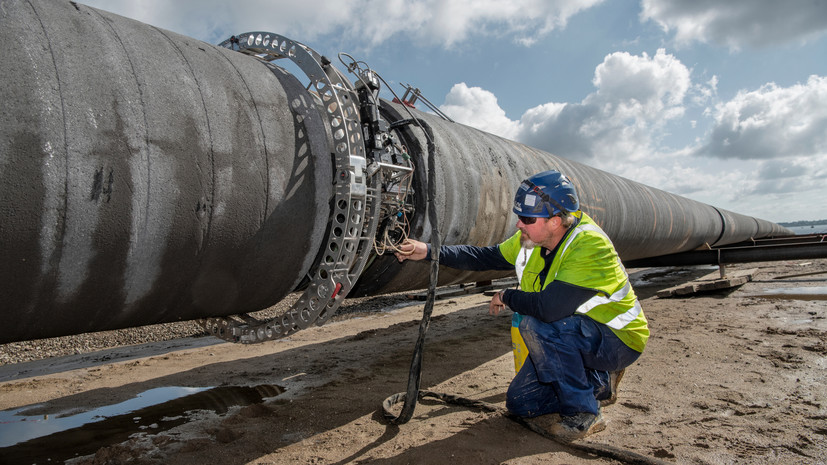 Deputy Foreign Minister of Poland Marcin Przydach commented on the decision of Denmark to revoke the permit to lay the Baltic Pipe gas pipeline.

He noted that the Danish authorities could be guided not only by concern for the environment.

“This applies only to a fragment of a gas pipeline in Denmark.

Nothing is being done around them ... Of course, we will try to clarify this issue as quickly as possible, although we understand that other interests often stand behind the topic of the environment, ”RIA Novosti quotes him.

At the same time, the representative of the Polish Foreign Ministry added that "in the interests of Poland and all of Europe" to complete this project as soon as possible.

Recall that the Baltic Pipe is a gas pipeline that is supposed to connect Poland with Norwegian fields in the North Sea.

The construction of the highway began in May 2020.

At the previous stages of the project implementation, it was assumed that the Baltic Pipe will be operational by 2022 and replace part of the supplies from the Russian Federation.

According to the Polish side, the project cost exceeds € 1.5 billion.

Polish President Andrzej Duda argued that "the project is of great importance for the European economy and the EU's energy sovereignty."

He noted that Poland would then be able to send gas supplied through this pipeline, in particular, to Ukraine.

Also on russian.rt.com "Political decision": Warsaw refused to extend the contract with "Gazprom" after 2022

However, on June 3, 2021, it became known that the Danish Environment and Food Appeal Board did not recognize the permit issued by the Environmental Protection Agency for the construction of the Baltic Pipe gas pipeline.

From the statement of the press service of the Danish transport system operator Energinet, it follows that on July 12, 2019, the Danish Environmental Protection Agency issued an environmental permit for the construction of the Baltic Pipe.

But on May 31, 2021, the Environment and Food Appeals Board denied the permit.

The statement clarified that the permit to build the pipeline was issued before the Environmental Protection Agency had sufficiently studied the effect that the pipeline would have on the habitats of certain species of fauna protected in the EU.

As explained by Marian Kaag, Deputy Director and Head of Construction Projects at Energinet, the Baltic Pipe is a major construction project that crosses Denmark and “cannot but create inconveniences”.

According to her, Energinet is focused on ensuring that the pipeline is laid as carefully as possible for humans and nature, "including ensuring good living conditions for protected species."

Commenting on the situation around the Baltic Pipe, Senator Aleksey Pushkov suggested that Poland will no longer have time to confront the Nord Stream 2 gas pipeline.

“Now Warsaw will have no time for Nord Stream 2.

You need to save your project.

As the wisdom says, do not dig a hole for another, you yourself will fall into it, "Pushkov wrote on Twitter.

Denmark has revoked permission to build Poland's favorite Baltic Pipe gas pipeline, which was supposed to link Norway to Poland.

Now Warsaw will not have time for Nord Stream 2.

You need to save your project.

As wisdom says, do not dig a hole for another, you yourself will fall into it.

It should be reminded that Nord Stream 2 is two gas pipeline strings with a length of over 1200 km each and a total capacity of 55 billion cubic meters.

The pipes run along the bottom of the Baltic Sea through the exclusive economic zones and territorial waters of Russia, Denmark, Finland, Sweden and Germany.

Deputy Director General of the Institute of National Energy Alexander Frolov, in an interview with RT, noted that the situation with the Baltic Pipe will not affect the European energy market in any way, since the project itself "was and is extremely local and does not make a significant contribution to the European gas market."

At the same time, Frolov recalled that Warsaw will have to coordinate the project with Nord Stream AG and Nord Stream 2 AG.

Against this “interesting” background, I think it will be very exciting to see what solutions Poland will receive from the two operating companies, ”the expert noted.

Stanislav Mitrakhovich, an expert of the National Energy Security Fund and the Financial University under the Government of the Russian Federation, also spoke about the situation. In an interview with Sputnik radio, he said that Poland is trying to draw parallels with the situation with the Russian pipeline: "Russia was not allowed to build Nord Stream 2, they say, and we are not allowed." At the same time, the analyst expressed doubt that Denmark has any political motives to obstruct the construction of the Baltic Pipe.