The 39-year-old stabber had time to hold the young woman hostage for hours as well as fire at the police before she died in the police shoot was created. 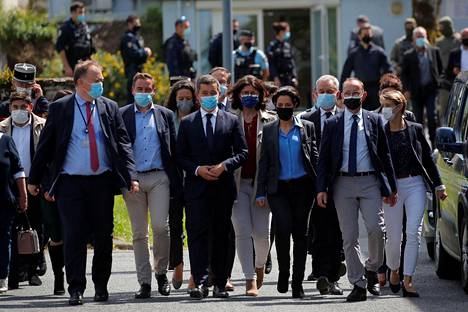 France is once again shocked by another violent attack on the police.

A female police officer was seriously injured on Friday when a 39-year-old man stabbed her at a police station in the municipality of La Chapelle-sur-Erdre near Nantes.

According to authorities, Ndiaga Dieye, a French citizen suspected of stabbing, was released from prison in March after serving an eight-year sentence for a violent crime.

His name was also said to have been on the list of those under surveillance by the intelligence services due to the terrorist threat.

“He was added to the list in 2016 because of the strict practice and radicalization of Islam,” French Interior Minister Gerald Darmanin, who visited La Chapelle-sur-Erdre on Friday, told Reuters.

According to Darmanin, Dieyen had also been diagnosed with severe schizophrenia in prison, which had led to her being placed in a supervised support home after her release.

The interior minister also said Katell Lereec, 46, a victim of the stabbing, is expected to survive her injuries despite their severity.

After stabbing Lereec, the suspect stole this gun and fled the scene in a car, which, however, he crashed after a while.

The man forcibly broke into an apartment that hit him, holding the young woman hostage for more than two hours.

About 250 police officers took part in the manhunt.

At some point, the suspect appeared on the balcony of his hostage's apartment and opened fire on the police downstairs with the stolen weapon.

Soon, however, he set out to escape to a nearby field where he continued to shoot.

The man's escape journey eventually ended with a police stomach shot being created, which also took his life a little later.

Newspaper photographers watched a male yacht on Friday, attended by about 250 police officers.

According to prosecutor Pierre Sennes, the electronic equipment belonging to the suspect will be investigated before deciding whether the prosecutor focusing on terrorist offenses will take responsibility for investigating the case.

The police stabbing reminded the French of a stabbing in Paris a month ago in which the victim was Stephanie Monferme, an administrative employee of the police department.

He died at the door of a police station when a Tunisian citizen inspired by extremist Islamist videos attacked him with a blade.

The Paris attack, as well as other attacks on the police that preceded it, have led French police to call for improved security and tougher penalties.

The issue is also becoming a prominent theme in next year’s presidential election.

On Saturday, residents of La Chapelle-sur-Erdre brought cards and flowers to the police station to support the stabbed police in their recovery.

According to AFP, Lereec was described as “very friendly” and “kind”.

I am saddened for him because he did not deserve this, Ines, 77, who appeared under his first name alone, told AFP.

Locals brought flowers and cards in front of the police station on Saturday.

Diye, who spent nearly half of her life in prison, had a total of 19 criminal convictions in the background.

Lawyer Vincent de la Morandiere described his late principal as a “failure of the justice system”.

- He began serving his first prison sentence at the age of 17.

He sat throughout the verdict, and did not work.

He said his client was “very closed” despite his family having “sacrificed himself trying to get help”.