Sharjah Police, in cooperation and coordination with Dubai Police, succeeded in arresting a gang of 10 accused specialized in the operation of telephone fraud. The incident began with a report received by the Eastern Region Police Department, stating that a person had been defrauded by an unidentified person. 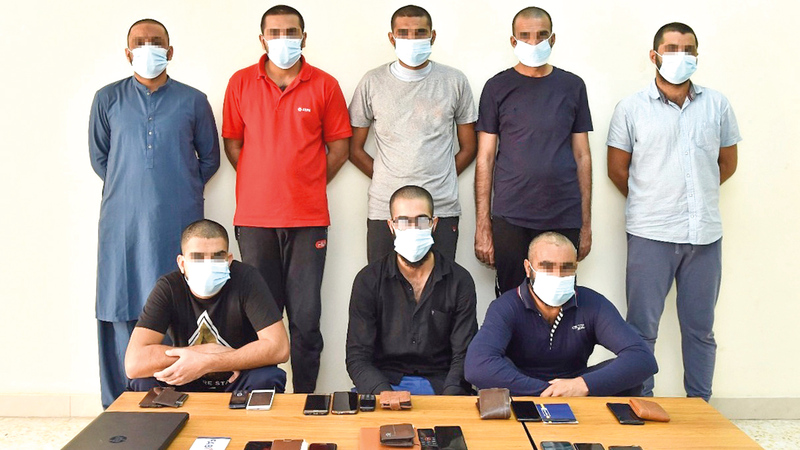 10 defendants specialized in seizing the assets of their victims

Eight gang members have scam phones in front of them.

Sharjah Police, in cooperation and coordination with Dubai Police, succeeded in arresting a gang of 10 accused who specialized in the phone fraud operation.

The incident began with a report received by the Eastern District Police Department, stating that a person had been defrauded by an unidentified person, who called him and deluded him that he was an employee in a bank and wanted to update his data, which enabled him to penetrate his bank accounts and withdraw an amount of 32 thousand dirhams from his account balance.

The Director of the Eastern Region Police Department, Colonel Dr. Ali Al-Kai Al-Hamoudi, said that the Criminal Investigation and Investigation Department worked on forming a team to collect information and infer about the accused and reveal his identity, as he poses a threat to persons, companies, bank accounts, and credit cards of individuals.

He added that by communicating with all police agencies in the country, the investigators, in coordination with the Dubai Police General Command, were able to reach the perpetrators, as it turned out that they were a gang consisting of 10 people with the nationality of Asian countries, who specialized in this type of fraud, as they intended to send messages. Fake text to the customers or communicate with them by phone, informing them of the need to renew their bank account data so that their banking services at the bank are not stopped, and after being able to deceive the victim, the account holder executes what the caller asks him to do, and then, after providing them with the data, the balances are transferred from The victim's accounts are transferred to other accounts and sent abroad at the same moment.

The head of the Criminal Investigation Department, Lieutenant Colonel Saeed Khalfan Al-Naqbi, stated that the criminal investigation officers managed to arrest the perpetrators and found in their possession a large number of smart phones and chips that carry numbers for some telecommunications companies in the country, a computer, and a set of receipts for money transfers showing the method of Fraud followed with victims.

He pointed out that the investigations revealed the role that each accused played in fraud with the aim of stealing money, as all the accused confessed to the accusation against them, and accordingly, the accused were arrested until they were referred to the Public Prosecution.

He called on community members not to pay attention to messages or misleading communications and to immediately report any crime or suspicion related to financial fraud, and to inform the police authorities of these suspected numbers, stressing that banks do not require their customers to disclose their bank data or personal information through text messages or messages. Email or call them under the pretext of updating their bank accounts.