Analysis: "Annie Lööf needs the Left Party - in the fight against SD"

Opposition to the Sweden Democrats has defined the Center Party as a value-driven idea party and attracted new voters from the red-green side as well. But the dream of a collaboration in the "broad center" where both S and M are included is even more unrealistic today than after the last election. Instead, it is likely that the Left Party will be needed for a new "anti-SD coalition" to get its budget through. 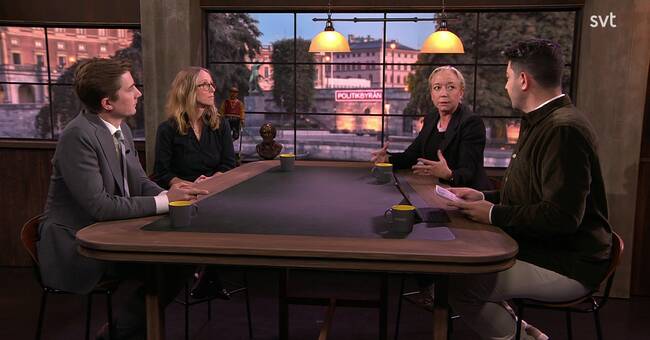 But that is not how her party leader expresses herself.

Anyone who has listened to Annie Lööf (C) this spring hears that she makes a clear distinction between the two "outer edge parties".

The Center Party should not cooperate with the Left Party because they have a bad policy, but it is the Sweden Democrats who have extreme values.

Despite the distinction, the door to V is closed.

Anything else is impossible internally.

Slamming the V-door with 16 months until the election would also be a strategic mistake for those who want to convince voters that there is a government alternative in the middle.

"SD is the main enemy"

Continued opposition to V then, but SD is the main enemy.

And that conflict has greatly contributed to placing C where they are today.

A starting point can be set for the post-election analysis Annie Lööf wrote after the 2010 election. The conclusion was that the party must become more ideological:

"The Center Party is today perceived as an interest party for rural areas and entrepreneurs and needs to move towards becoming a clearer idea-driven party by taking its historically strong core values ​​with it into the future."

Even then, the party had begun to increase in the big cities, especially in Stockholm.

The Stureplan Center, which saw itself as the party's "ideological and liberal flagship", had become increasingly dominant and according to Annie Lööf, their idea work was something the rest of the party should follow.

The answer was the popular idea program where the goal was to marry the old peasant movement with the Stureplan Center under the motto that the party has always been liberal.

But there was no boost in public opinion, rather the opposite.

2014 was the party's third worst in modern times.

"Make it impossible for C to change your mind about SD"

Instead, it was the fight against SD in combination with a generous migration policy, which seriously came to define today's Center Party as an idea-driven and principled liberal party in the eyes of voters.

And it has also paid off from the red-green side.

Voters who are attracted by the message that today's great struggle is not between the left and the right, but between a broad liberalism where even Social Democrats can be included, against nationalism and right-wing populism.

A value struggle that makes it impossible for C to change about SD.

"Can be so badly forced"

But is it then possible for C to adjust its setting to V?

The answer is that they can be so badly forced.

If the public opinion situation does not change dramatically, an "anti-SD coalition" between S, C and MP will need the Left Party's support to ensure that the budgets go through the Riksdag.

And the left-wing parties do not intend to give away that support for free.

There is another way, the center parties shout.

A collaboration in the broad middle where both S and M can be included.

But then they disregard the fact that S and M want each other as the main opponent.

And that Ulf Kristersson (M) has already charted his path to government power and that includes a collaboration with SD.

And that Stefan Löfven (S) is not so keen on another term of office where V can do something together with the rest of the opposition and conduct poaching against the budget.

The fact that no other party leader believes in Annie Lööf's government solution also means that it currently appears to be mostly wishful thinking.

The Politburo's latest episode "Annies (V) al" is about the

Center Party and about Annie Lööf really opting out of both Jimmie Åkesson and Nooshi Dadgostar if she is to have any influence over Swedish politics?